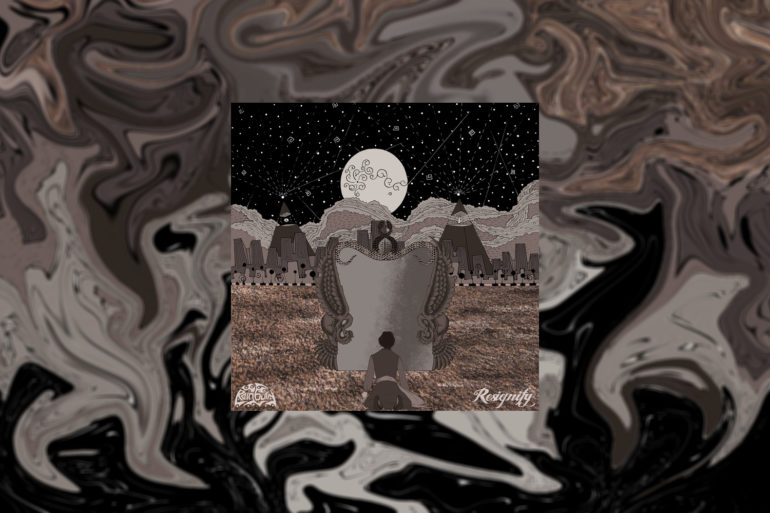 With Resignify, Rainburn offer themselves up for a reboot, errors et al.

Abhinav Krishnaswamy·
Reviews
·December 10, 2019
6.5
Challenging
For the uninitiated, a little digging would lead you to understand that Rainburn is no strangers to the scene. Having formed in 2011, a series of lineup changes and a well-received EP ‘Canvas of Silence’ accounted for most of its output. That was until last year’s Insignify, the band’s debut full-length. The songs were punchy, melodramatic, instrumentally aspirational, drew from a variety of influences and seemed to paint a clearer picture of the band.
With Resignify, the band, spearheaded by Srivats ‘Vats’ Iyengar, flit between live renditions and studio reworks. Opener ‘Suicide Note: Alive in Black’ kicks things off with a previously absent dramatic vocal intro, before launching into the familiar guitar chugs of the studio version. The song’s relentlessness and instrumentation are striking throughout, not a beat missed as the band ploughs through movement after movement. The other live recording is ‘Someone New: Another Night’, which is exhibitionist and aggressive. True to the original, save for a lone female couplet at the start, the ode to primal urges shines brightest towards the end, Iyengar’s vocals sounding vaguely like if Morrissey just dropped all his ridiculous pretences and fronted Dream Theatre.
The band proceeds to dig up ‘Veil’ from their Canvas… EP for a gentle facelift. This update only enhances the song’s exhuberance, indicative of a time when everyone said yes to more and were more adventurous. The arrangements have sprite and bounce and Vats’ vocals are at their natural best, even taking off into Chris Cornell-esque screams; nothing sounds out of place.
Certain aspects are audacious, the band tightroping earnestness and contrivance. ‘Elusive Light: Resignified’ gets the full Coke Studio treatment: heavy guitars and bass traded for their acoustic counterparts, drums for tabla, searing guitar solos for Adarsha Ramakumar’s searing violin solos. It all seems to come together somehow and not veer into the camp or trite. Like a mural on the side of a building, coming together in one of those timelapses.
Until the vocals periodically and wildly swing from the scaffolding, risking the entire operation. While justified in the original from Insignify, they could have seen the occasional memo about a redo. Another misstep may have been the album closer, a piano-led version of ‘Suicide Note’. Bluesy in mood, the arrangements are gorgeous and meticulous but are at war with the vocals, with the meter just not sitting comfortably enough. The interlude is another attempt at building, a soft acoustic passage supplemented by some superb piano playing. In an ideal world, the song would have ended there but takes one through another verse before just ending.
The EP is a bold step for the band, an attempt to shake off cobwebs and malaise. At its best, Resignify reminds audiences of its makers’ virtuosic live performance skills and breathes life into studio tracks. At its worst, it shines an all too painful light on some of the choices made, particularly in the vocal department. The vocals aren’t a one-size-fits-all type of deal, but decisions are decisions. Vats is unsure of what affectation to employ, choosing everything but going nowhere with anything.