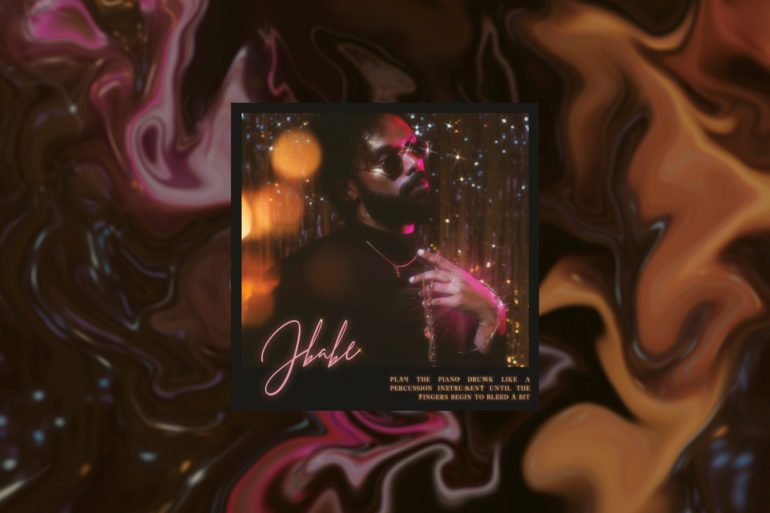 With JBABE’s debut album, we go back a couple decades to finally enter a new era of lo-fi

Josh Fernandez of The F16s debuted his solo project JBABE at Mumbai’s Neon East Fest last month, dropping an early Christmas present for the band’s fans and India’s lo-fi coterie in general. Bringing back the sensual sounds he is typically associated with – but with even more nostalgic beat-driven sounds and a very lush vibe – Josh unveiled a seven-track bedroom pop album shortly after debuting some of the songs at Neon East itself.

The album title is borrowed from one of Charles Bukowski’s books and is every bit as idiosyncratic, narcissistic and obnoxious as anything remotely related to the author. “The fact that Bukowski celebrates us, desperate degenerates, and indicts bourgeois society, makes us best friends,” Josh says elsewhere. And like his poems, JBABE pours forth love in the time of existential crisis, addled with a pinch of self-deprecation and regret. Languishing across the neighbouring confessionals is a man who cares less and less in the face of the mundanity and futility – and learns how to sing about his experiences without sounding overly morose or self-piteous.

The record is bathed in a wavy, psychedelic haze, accompanied by electronic basslines, gentle rap verses, and warbling synths reminiscent of the eighties which is when synth-pop was just rearing its head. The luxe synth overlays on ‘A Good Amount Of Gay’ and catchy refrain of ‘Antibambi’, for example, set the tone for the record.

Josh takes it easy with the tracks, most of which fuse classic R&B, soul and contemporary indie-pop, along with touches of funk. All the songs are incredibly melodic and written to the point where the irreverent narcissism and the seedy-bar vibe is buried underneath nostalgic melancholia and stellar craftsmanship. There are interesting elements throughout the album, including Julian Casablancas-esque vocoder vocals buried under layers in ‘Guyver’ which is otherwise a mellower number. The synth-laden ‘I’ll Get The Cheque, We Can Split The Regret’ begins like a Kevin Parker number about love, paranoia and heartbreak and shifts to high-pitched autotune before belting out a beautiful spacey verse that bookends the song. With ‘Pussy Prison,’ the album is at its most unguarded and somewhat under-developed, plateauing in a short rap interlude but rocking out with a strong guitar outro.

While Josh’s record unfurls slowly, gliding from song to song with a drowsy symphony of 808 drum machines, guitars and synths, ‘Whatyouwantboi’ winds it up with an odd flourish very abruptly and rather prematurely. The songs are all pretty short, with the longest being a little over three and a half minutes and the album itself capping off at 21 minutes. The ostensible themes range from a life of lust and lost loves, faithlessness and summer flings, to male tenderness and modern relationships where JBABE and his anti-bambi “blow each other kisses over fucking FaceTime”-  each theme dealt with emotional directness.

The tracks follow a conventional structure most of the time, and after the first two, you can anticipate the oncoming section but never imagine it brings. Josh introduces sound effects and beat drops, breaks into a synth solo or rap, giving the songs an amorphous quality despite the predictable structure. However, he tends to give a lot away at once, like the hook in ‘Guyver’ that flags off the song but should’ve ideally come in just once – right in the end – in my opinion. There are a lot of elements packed into each song, which strips away the minimalist possibilities this project seems to simmer with, while failing at the same time, to add more complexity and dimensions to the tracks. That said, it is evident from JBABE’s album art that he was going for the kill – with the OTT shades, glitter and mood lighting – in which case, this choice of audio aesthetic also makes sense.

As far as comparisons go, if they need to be offered at all, Tame Impala’s and The Strokes-y influences are easy to catch. But the record actually seems more in tune with the young and diverse crop of contemporary lo-fi cohorts – Joji, A.Chal, Sunset Rollercoaster, Poolside, Pink $ock, Cuco, HOMESHAKE, as well as neo-soul and RnB trailblazers like Frank Ocean and Tyler, The Creator to name a few. Even as Josh falls back to their established patterns, leaving little room for novelty, his work on the album is meticulous, creating dreamy earworms for lazy afternoon listening or to shuffle your feet to. Rarely does an artist’s vocals and lyrics match up to the sonic atmospheres as well as it does on Play The Piano…

This release comes right on the backs of The F16s’ latest album WKND FRNDS that too boasts of a terrific, polished retro aura. With the response the record has been generating since the Neon Fest and the direction it charts for the musician, it is safe to say that this is only the first and one of many lo-fi records from the house of JBABE. If you’re a fan of the genre, you’d do well to add it to your daily mix.