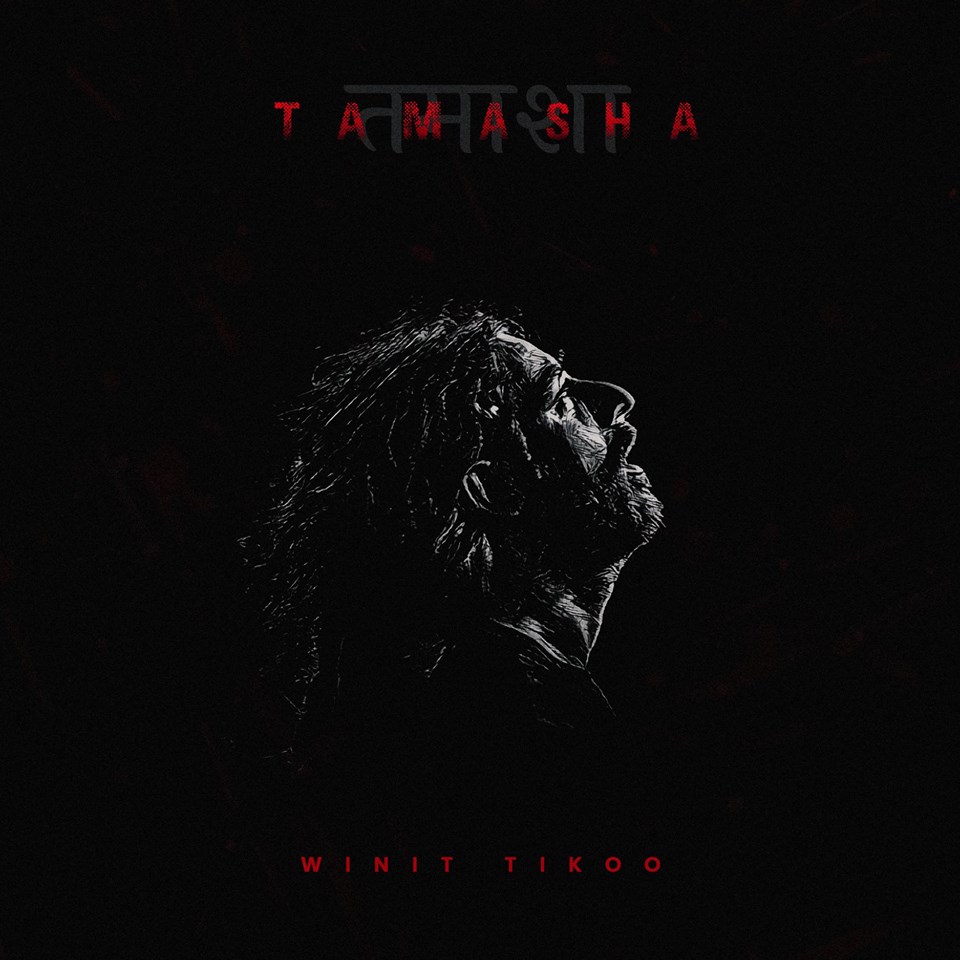 Long before the new wave of Carnatic-rock hit our airwaves, a budding pair of ears in Srinagar would be charmed by Kashmiri folk music and would go on to string together notes and harmonies on his own terms. Winit Tikoo is a singer, songwriter and guitarist who moved to Mumbai in the early 2000s to pursue his dreams of becoming a musician. Over the years, he would expand his sonic palette by incorporating sounds inspired by the great progressive and alt-rock bands of the 20th century, as well as Indian folk and classical music.

His debut full-length album, Tamasha, has been several years in the making. The album was initially slated for release in 2014. ‘Music is the purpose of my life’, he boldly states in an interview from that time, and it is evident in the album which has finally graced our ears and brought a wide variety of musical styles and lyrical styles to the table. The record is a tableau of various shades of rock music ranging from pop punk and alt-rock to acoustic and folk rock. We witness the confluence of a large pool of talents with instruments like the sarangi, harmonica and flute in their arsenal, as well as production in YRF Studios, Mumbai and Plug ‘N’ Play Studios, New Delhi.

The nine tracks over 52 minutes are nothing short of a rollercoaster of emotions with left hooks at every corner. ‘Ajnabi’ hits the listener with a sense of urgency right from the get-go as Winit’s soaring vocals talk about being a stranger in this world, and how all traces of his existence and will eventually be buried and forgotten. Things get more upbeat with the next track, ‘Gds’ which is a similar meditation on life, but told through more optimistic eyes on a stage at the centre of a massive arena.

The same can be said about the last two tracks of the record. ‘Jaan-e-Jaan’ is a catchy, engaging and soulful track worth opening the sunroof of your car for. Winit’s powerful vocals motivate the listener to live in the present and savour the subtle and fleeting pleasures of life. The closer, ‘Tamasha’ takes things one step further and sticks the landing perfectly with its bouncy bassline and a playful fusion of Garreth D’Mello’s harmonica, and hard-rock guitars.

However, not everything about the record is hard-hitting and upbeat. For every optimistic banger, we get introspective odysseys like the low key opener, ‘Zindagi’. The lyrical themes of overcoming hurdles in life, perseverance and living life on your own terms are decidedly sparse. They are interspersed with glistening keys over a slick bassline which builds up until the bendy guitar solo laden tail of the song. ‘Pagal’ is a beautiful blend of folk, classical and rock music accentuated by a moving sarangi performance by Shahrukh Khan.

‘Faiz’ by Faiz Ahmed Faiz is the high point on the record and is the only track not written by Winit Tikoo. It’s a sharp nosedive in pace after ‘Gds’ with its intimate and rustic folk-inspired instrumentation. The repeating ‘kuch ishq kiya/kuch kaam kiya’ seeks to deliberately oversimplify the protagonist’s life into the sum total of work and love. The second half of the track is an upbeat folk-rock epilogue with a beautiful flute solo by Sriram Sampath against soulful backing vocals. The 12 minute ’19:47′ is a curious choice made my Winit. It features the author, S N Tandon who recounts his experience during the horrific events of the India-Pakistan partition over eerie background instrumentals. The tale is a gut-wrenching, visceral and beautiful. However, as poignant as it is, it does stick out like a sore thumb in the context of the rest of the album, blemishes its flow and costs the album its cohesivity.

Tamasha is an album which boldly explores vast swathes of soundscapes while being able to remain grounded. The rapid and unexpected shifts in mood and tone surprisingly work to its benefit with each track offering either a different point of view on the same issue or a unique analysis of another aspect of life without a trace of pretension. This makes the album infinitely relatable with extremely high replay value.

Editor’s note: The original article has been updated since its original publication.