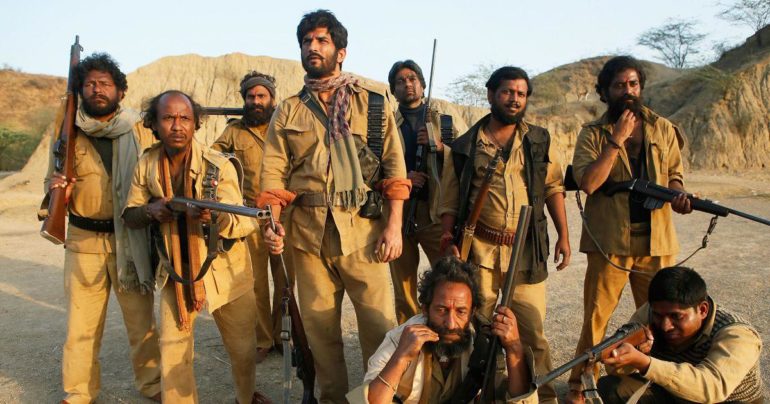 Abhishek Chaubey’s Sonchiriya has quietly turned out to be a leading contender for the year’s best film. Songs play an important role in the film, though it is the background score that is indispensable. Naren Chandavarkar and Benedict Taylor, who scored for Chaubey’s Udta Punjab as well, do a masterful job here too. Chaubey’s mentor Vishal Bhardwaj composed for the former’s first two films, Ishqiya and Dedh Ishqiya, and returns again. In his first collaboration with Varun Grover, Bhardwaj delivers a pleasing soundtrack. The seven-track album (two songs have another version for them) is not needed, and some have mentioned that some of it in the film feel unnecessary, but that would be very disrespectful to the director, who has gone on to show — perhaps through omission, or what felt relevant — that he has only kept what he felt was important.

‘Baaghi Re’, sung piercingly by Mame Khan, creates imagery of the scorching sun, and gang wars. A more rustic version of ‘Tashan Mein’ almost. This is used judiciously in the film, just after a bloody encounter with the police, one that takes many out. It is commendable that Chaubey restrains himself and doesn’t use it over and over like Rakeysh Omprakash Mehra with ‘Mirzya’. The temptation could be there, but the result would have been insufferable. There’s a remix of this song too, which features a lot more guitars, is rock heavy and band friendly. It works.

It is always a welcome sight to see Rekha Bhardwaj’s name against a song. She sings the haunting ‘Sonchiriya’ and it is the ‘Reprise’ version of the song that really manages to devastate you as a listener. And Bhardwaj’s earthy voice accentuates that feeling.

“Saanp khavega chuhe ko, saanp ko khavenge giddh, yehi niyam duniyo ko, keh gaye sadhu siddh” is mentioned in the film on a couple of occasions, and Varun Grover has penned an entire song on this idea. Sukhwinder Singh sings his heart out, and the booming pensiveness, (especially because Singh is a boisterous singer anyway) of ‘Saanp Khavega’ is really lovely to witness.

‘Naina Na Maar’ thankfully doesn’t make it to the film, again exemplifying Chaubey’s filmmaking abilities. The Sukhwinder Singh and Rekha Bhardwaj sung dance track, layered on an average electronic sound, is unnecessary and unremarkable. Considering it’s not needed in the film too, it seems like a complete waste.

‘Ruan Ruan’ comes on as the credits roll and is the most likeable song on the first listen, with Arijit Singh’s laid back vocals perfectly crooning a distinctly Vishal Bhardwaj melody. The kind, that would suit the composer coming behind the mic as well. It has received a lot of love already, though it would’ve gotten exponentially more popular if it belonged to a more massy film, or was marketed better.

We’re waiting to see the day background scores are shared officially with the audience because in this film, it is the real winner. Sonchiriya might fall in Bhardwaj’s template album, but it still mostly works. Also, it must be reiterated Chaubey’s omission of certain music-related things showcases his holistic ability as a filmmaker and further shows that what has chosen to keep in a remarkable film is intentional and adds value to his story.