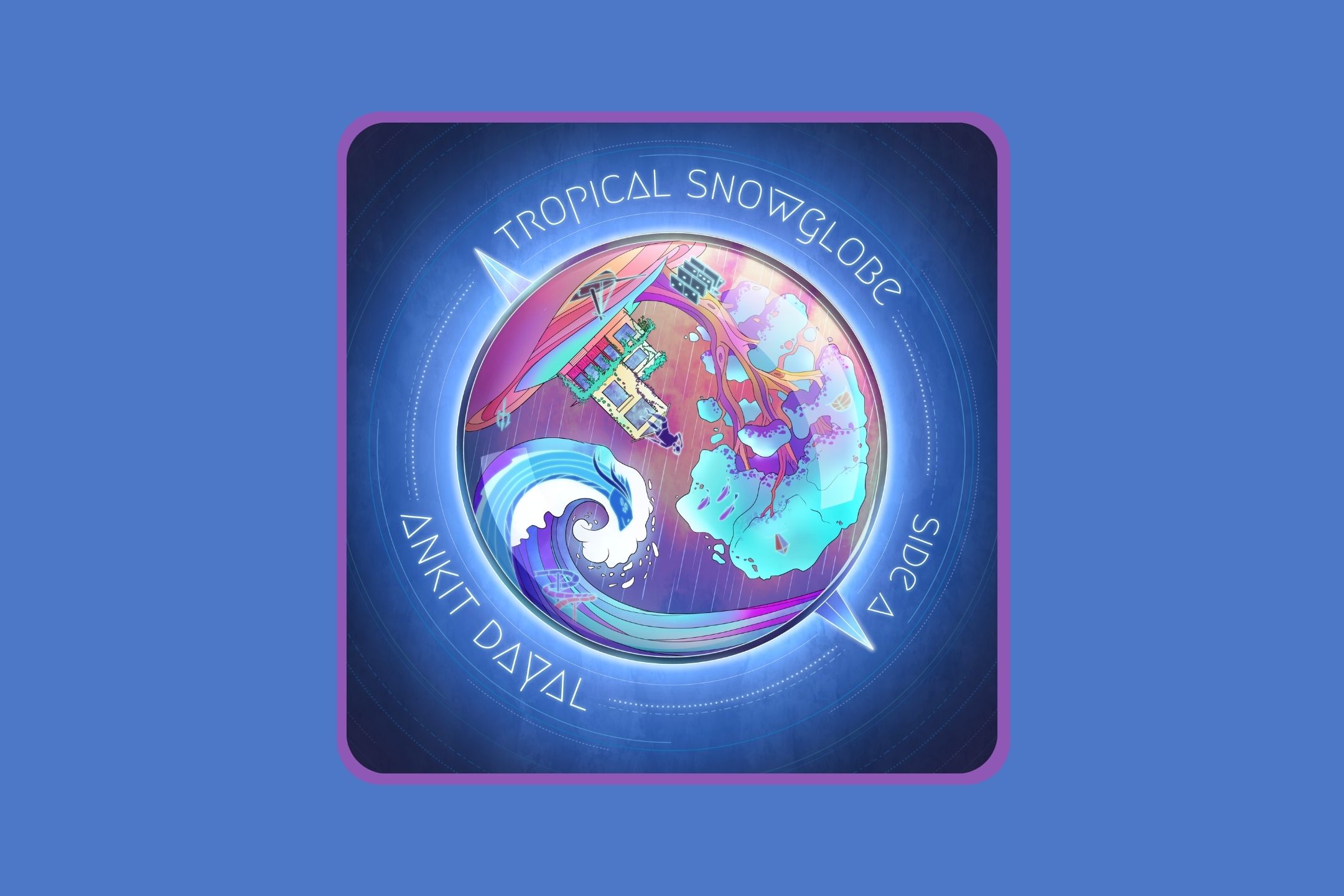 The burden of relatability is a very real one that many artists feel today—young or old. And, sure, the idea of shared stories and experiences, and an ensuing culture of empathy, make for a noble artistic pursuit. But relatability isn’t always as authentic as it maybe should be.

Except if the body of work in question is Ankit Dayal’s Tropical Snowglobe (Side A). The Mumbai-based musician arrived spectacularly, armed with his 11-track full-length debut album, earlier this month—a catalogue of old and new; the past and the present.

Some of his previously released work that features on the new album are tracks such as ‘Frowning Sky’, ‘Good Way to Die (Quarantine Edition)’, and the most recent, ‘Domino’. New tracks such as ‘Sojourn/ Hava Hoke’, ‘Floating for Tips’, and ‘1800-Dragon’, among others, comprise the rest of the collection.

Tropical Snowglobe (Side A), the title of the album and the album itself, are the perfect manifestation of contradictions and dichotomies. Every track personifies a state of reflective push and pull, and make way for fitting experimentation and disruptive sounds throughout.

A little deep dive into the artist’s online presence will reveal a shift in direction. This may be Ankit’s debut solo album, but he’s been around in the circuit for a while. From his involvement in the rock band, Spud In The Box, to commercial projects and multiple features with other notable artists (see Noni-Mouse, Sid Vashi, and more), the richness of his experience is evident.

But it’s the height of individuality that Ankit begins to carve for himself with this album that stands out. Combining slick R&B grooves with bars of alternative pop and shaking the whole thing up with mellow acoustics (not to mention his earthy tone), he achieves a unique sound right off the bat.

Tropical Snowglobe (Side A) kicks off with the electric ‘What You Need to Hear/ Suffer’, a gritty inner monologue in song. The choral elements on this one amplify the sentiment, ending with a kicker of a line, “Looks like you need some yes men to say amen, but I don’t need a priest right now.”

The whimsical ‘Frowning Sky’ arrives next, complete with ambient elements and quintessential singer-songwriter presentation. The touch of jazz and reggae adds to the fullness of the track, making way for the chill-inducing ‘Good Way to Die’—a previously released quarantine project. Brimming with spooky harmonies and a slick R&B hook, this one stands out as one of the more experimental tracks on the album.

‘Domino’ arrives next—a sparkly and comforting indie track that slows things down and a necessary one before we get into the next track. ‘K0B’ is a conceptual track that builds a narrative of a ‘cyber friend purchase’. A slick bass groove ties the whole thing together, right before the track dives into a hard-rock riff that energises you, throwing you into the sonic instrumental interlude, ‘Betrayed By The Bitrate’.

The two tracks right after, ‘Sojourn/ Hava Hoke’ and ‘Floating For Tips’ bring a cheer to the project, while still retaining the characteristics of Ankit’s unique sound, giving you no warning for the next track, ‘1800-DRAGON’.

Almost K-Pop like on the initial hook, the vivid track paints quite the picture, especially with the line “Are you a judge and jury with no power at all?” Featuring vignettes of percussion, harmonies, empty spaces and full crescendos, the track is perhaps the peak of production on this album.

‘Swimming By’, the singer’s latest single, pairs perfectly with the last track, ‘B4U’, on the album, only in its peculiarity and lack of structure. Unbridled by any verse-chorus restrictions, both tracks roam free, both lyrically and sonically. The former features some really complex reflections presented in both Hindi and English, while ‘B4U’, a nearly 5 minuter, combines futuristic voice samples with flamenco interludes to deliver the quirkiest love song on the indie landscape these days.