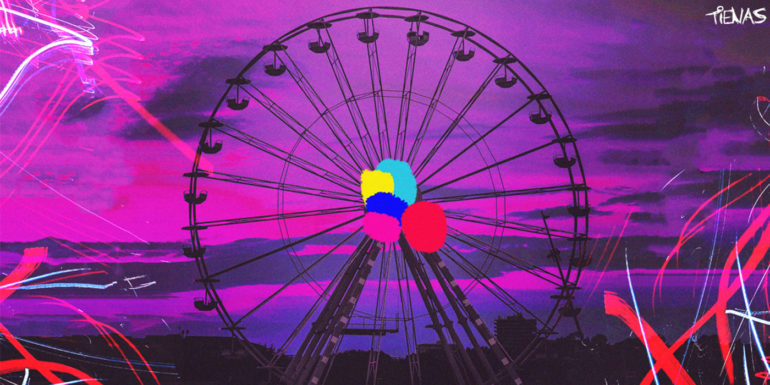 Half a decade ago, Tanmay Saxena was just another stuttering teenager in Mumbai. Like a lot of us, he remembers being transfixed at a tank top wearing B Rabbit (played by Eminem) spitting verse after verse of absolute fireballs at lesser poets in the acclaimed movie, 8 Mile. Eminem’s infectious energy hit him like a bolt of lighting through the screen and inspired him to follow in his idol’s footsteps, as seen from the origin of his stage name, Tienas (T ‘n’ S). The road ahead was paved clearly. He took to the studio to learn the art of music production, and the stage cured his stutters and turned heads everywhere. The biggest of these heads belonged to India’s most groundbreaking and relevant hip-hop record label, Azadi Records.

Under the tutelage of Azadi Records, the passion and energy in Tanmay had found the incubator of dreams. After honing his skills as a producer and a rapper, he dropped a mixtape titled, Unavailable in June 2018. On that project, the creative core of Tienas’ was striking. Here was an artist who didn’t shy away from collaboration, didn’t need to cater to mainstream forgettable club banger trends and didn’t shy away from wearing his many influences and emotions on his sleeve for the world to see. This was the inception of a journey that would be unbridled by his speech impediment and his humble origins. On his debut full-length album, O, Tienas emerges from the shadows and a wall of dry ice. The shadow he casts is larger than life, ambitious and deific. The mist clears to reveal a lone ranger clad in textured and rich emotion – a force to be reckoned with no less.

Yes, his voice is nasally and he’s far from being the best singer around. Tienas’ is aware and boldly flaunts the imperfections of his singing. This is done by his heavy use of autotune and other production tricks, taking a lot of influence by the emo-trap and emo hip-hop wave heralded by T-Pain and Kanye West.  The approach that Tienas takes isn’t wholly a chest-thumping mosh pit, although it does feature slight nods to the braggadocious attitude of his contemporaries from the same label. Instead, there’s obsessive attention to texture, emotional depth and atmosphere – thus effectively thrusting these batch of songs in the same light as their equivalents in the West. Through the meticulous attention to detail in his production, Tienas makes sure that every track feels native to the same soundscape while featuring distinct personalities and directions. We see extensive use of autotuned vocals, electronic loops and fuzzy synth lines at every nook in the album, as sonic motifs throughout the runtime. The production alone deserves an in-depth dissection as Tienas utilises interesting techniques like reversing an instrumental passage to add a lot of character and unpredictability to the tracks.

A significant chunk of the tracks barely crack the two-minute mark and exist merely as soundbites to express a very specific emotion or a passing thought. The low-key and understated ‘Flowers From An Old Manor’ allows Tienas to take a break from heaving himself to the top of the hip hop game to take a step back and lick his wounds. He then hits us with ‘Piece of Mind’ right after with its insane beat switch, driving the beat and rattling hi-hats to deliver the same vulnerability but enveloped in an aggressive and bold banger. ‘Nice Guy’ is another brief yet effective banger with its noisy, distorted and abrasive sound. This bipolar tendency of the album is reflected in the themes of the album, which deal with being unsure of yourself, being put down and being conflicted.

O is a cornucopia of his many rap influences. ’10-18′ is an aggressive and poignant stab at all those who stand to oppose him and is delivered in one clever bar after another with a buttery smooth flow lifted straight from the Lauryn Hill playbook. The track is a clever and insightful take on the effect of fame and mocks people who sell out and cash in on the hottest new trends. ‘Juju’ takes a lot of notes from Kendrick Lamar’s Good Kid, M.A.A.D City in the production and his flow down to subtle vocal inflexions. Tracks like ‘Lanos’ feature soaring autotuned vocals driving the pain and disillusionment in quite deep, taking cues from Kanye’s 808s & Heartbreak.

The emotional peaks, however, are the more low key, despondent and subtle moments on the album. Tienas’ allows his vocals to take centrestage as his insecurities, frustrations, pain and self-doubt are slowly dissected. This is where the autotuned vocals mature and blossom on ‘Backseat’ and ‘Of Queens and Kings Approximately’. The instrumental groundwork consists of intricately curated psychedelic and shimmering synths. The lyrics present a unique, down to earth and honest take on love, the path to success and betrayal.

A lot needs to be said of the near genius outro, ‘FTS Outro’ where Tienas’ propels himself into a progressive realm. The track features multiple movements featuring various moods and themes which have been strung together meticulously with every beat falling into place with surgical precision. The track is the most experimental and ambitious in the album featuring everything from playful jazzy keys to pulsating basslines to synthy and textured instrumental passages. Tienas’ manages an emotional paradox where abrupt and radical shifts in tone sound smooth and almost prophesied.

Perhaps Tienas’ greatest strength lies in his flair for collaboration. ‘Seedhe Maut Interlude’ surprise nobody when they bring their signature uptempo bars heavy with internal rhymes, hard-hitting lyrics and abrupt changes in tempo produced to perfection with Tienas’ psychedelic and shimmering synth lines. Sez on the Beat makes an appearance on ‘Die Romeo Die’ and helps Tienas’ create incredibly fun trap banger which is a poignant stab at the wealthy. The lyrics utilise vibrant imagery and destroy all political and religious symbols using Shakespearean characters. However, Prabh Deep and Shiloh Dynasty could not save the opener, ‘Cyclone’ from being a scattered, sprawling mess. The lazy beat and the staccato flow from all hands on deck have no payoff and meander throughout its runtime. ‘Dangerous’ follows ‘Cyclone’ and fails at adding anything to the album. We get a wafer-thin synth underbelly and patient percussion. Lyrically, the track features a tedious love song spread too thin with no real insight or anything unique or interesting. The weak chorus, “I got you / and you got me / and it is us / and I got the burner just in case the shit gets dangerous” is utterly forgettable and generic.

However, after getting past the two opening tracks and plunging into the lavish and soul-crushing universe crafted by Tienas, there is no turning back. The album is a masterclass in meticulous production and the power of collaboration. Tienas paints an honest and stripped back self-portrait in a hip-hop landscape that relies almost entirely on setting the competition on fire. Tienas’ approach is personal and intimate with each track revealing different aspects of fame, love, betrayal and heartbreak fleshed out in unique and thought-provoking ways.