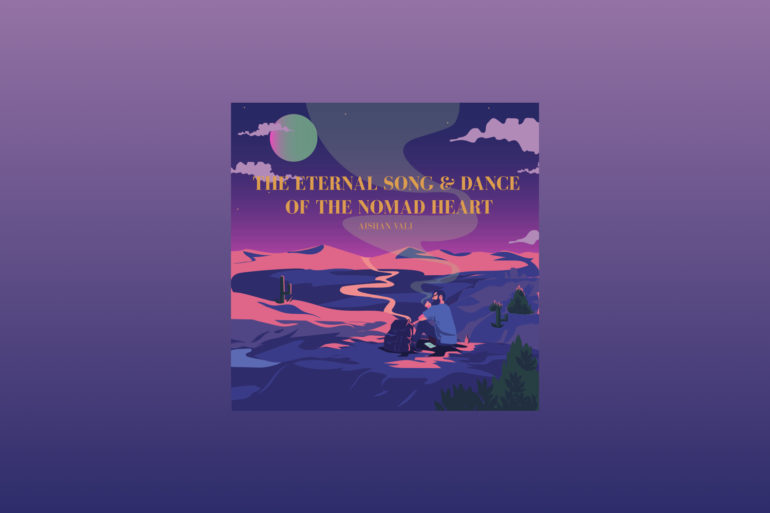 Two years in the making, Hyderabad-based Aishan Vali’s debut EP clocks in just shy of 15 minutes. Titled The Eternal Song and Dance of the Nomad Heart, it’s an impressive sonic bildungsroman and a portrait of an artist, deeply attuned to his inner life. Upon its release under Prototypal Records, Vali expressed, “The journey of this EP is the journey of my life,” and boy does it show. Yung.Raj, a friend and fellow Hyderabad native, on production duty, brings the rapper’s vision to life around melodic R&B, neo-soul, and chill-hop beats.

Opener ‘Breath to Breath’ has Vali grappling with the desire to possess time. The ephemeral nature of the universe frustrates him, and he broaches, “The things we seek only lastin’ for a second”. By the second verse, he finds solace in the changes the ticking clock brings, as he croons, “It’ll be ok by the morning, right?” The rhythmic but minimal bassline keeps things pedalling and groovy, with the chorus being an ode to staying present. Looped strings bring the track full circle as time is indeed fleeting, but this track has a lasting staying power.

The second track, ‘Chains’, is a percussion-heavy number that ups the tempo andante. It opens with a choice observation from the cult-classic Dazed and Confused on how societal norms restrict individuals. Vali wrestles his resultant inner demons and self-doubt when he sings, “I’ve never known what’s good for me.” He relinquishes his inner critic and envisions letting go as the production becomes more playful and airy. The boom-bap percussion recedes, with the drop in intensity, signalling a weight has been lifted off.

On ‘Joyride: A Passenger’, we ride shotgun in a Dickensian fever dream as the protagonist is visited by yesterday. This dreamlike state is heightened by Yung.Raj’s delayed melodic beats. Finding his way back to music, he shuttles from Banjara Hills to Hitech City – haunts in his home city of Hyderabad. Reborn as “the prodigal son of rap”, it’s hard not to cheer for our narrator with the outro that fades away as we emerge from the haze. The transition leaves the listener engulfed in thumping bass.

Armed with the affirmation he needed, ‘End and Begin’ marks a turning point as Vali banks on the rapport he has built with the listener. Here, his audience gets a direct address. He chooses conscious action to navigate life’s inherent chaos and embraces mindfulness. At his most playful, the track contains soul-stirring rhymes and a resounding sense of oneness with his fellow humans. Indeed, the themes here are a tad heavier, however if you tune out, the foot-tapping grooves will draw you back in.

Last but not least, ‘The Eternal Song and Dance’ is a soulful, lo-fi anthem outlining his return and his plans. The classical guitar evokes a lone ranger out on the frontier, and it’s just the right vibe to close out the collection. His humility is evident in the thank yous and godspeeds to fellow nomad hearts in the finale, with a spirit which sparks emotions that are left-to-be-continued.

To nuance, these hard-hitting themes in such a concise narrative arc is a feat. The Eternal Song and Dance of the Nomad Heart is disarmingly accessible as Vali knows where to pull back. The flow is deceptively easy-going with calculated breathing space, and the weight of the words hits over multiple listens. While emerging a modern-day epic hero, his musings never feel self-righteous. The lush textures in the instrumentals keep the songs from being too heavy and on the nose. Music is Vali’s way of giving back, and this debut shows there sure is a lot to take away.