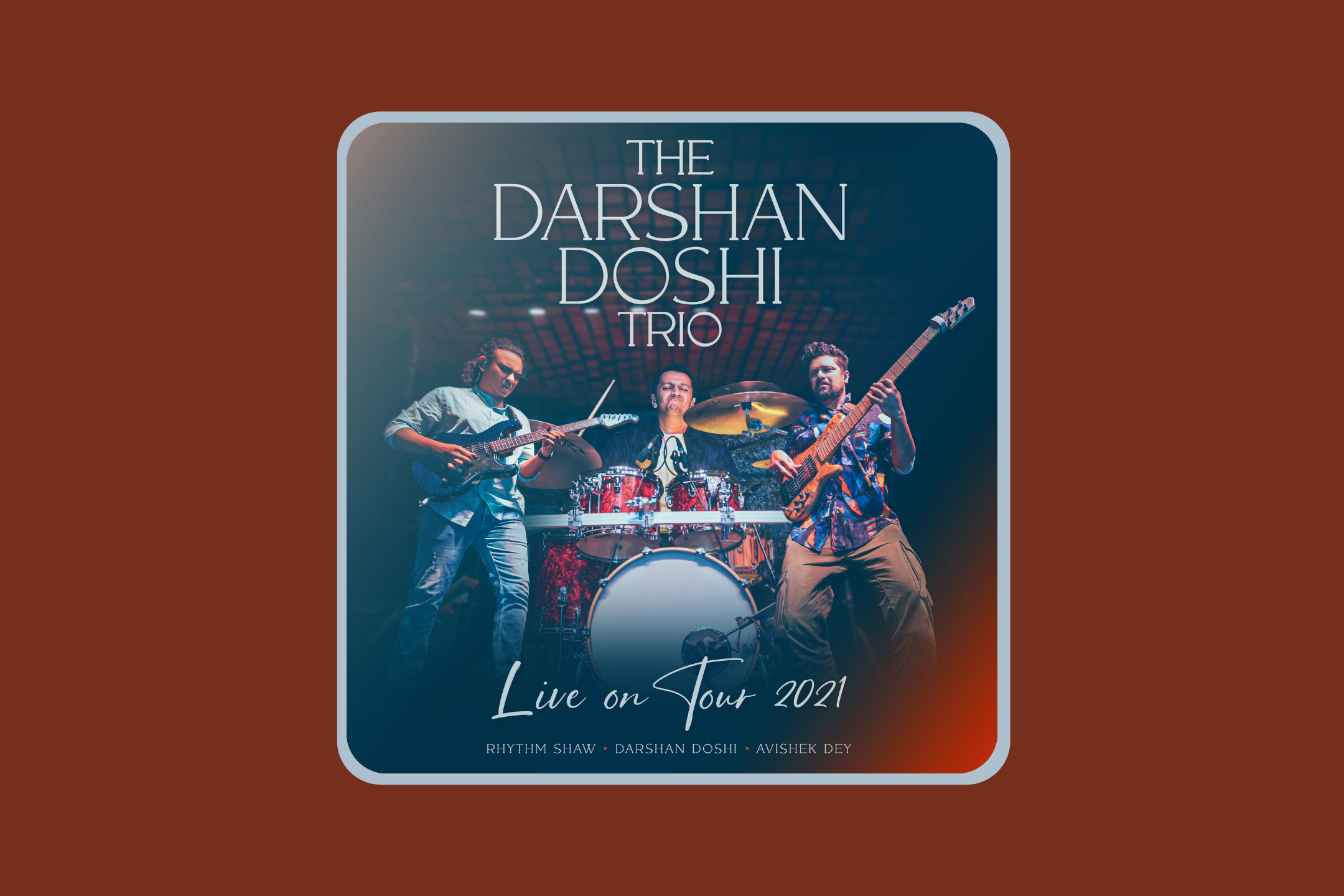 Renowned drummer Darshan Doshi and his jazz-fusion collective, the Darshan Doshi Trio, comprising guitarist Rhythm Shaw and bassist Avishek Dey, have released Live on Tour 2021. The 7-track album is a collection of their live performances, recorded during a four-city tour that commenced in October last year. It offers an adept fusion of jazz, blues and rock, all while being mindful of the accessibility factor.

It wouldn’t be a stretch to say that ‘Insrhy Master’ ushers an anthem for the album, with pulsating drums from Darshan and an exciting range of Rhythm’s tone syncopations, until about a minute in, when the elements gather and give rise to a much anticipated introductory riff. The rest of the track drips with expertise, all while Rhythm shreds lightning licks and sets the stage for the 40-minute journey. The bridge hosts an interplay between the bass guitar and the lead, the same kind that you would imagine between a set of two finalists.

‘Night in Tunisia’ welcomes you with timely arrangements to odd time signatures that extensively make up the track. Avishek’s bassline holds it everything together, laying a sweet foundation for Rhythm’s far-out improvisations. The symmetry in their coordination makes it fascinating how the album almost poses itself as a casual jam session between three first-rate musicians, with a nothing-to-lose-nothing-to-gain-mindset.

One of the trio’s original hits, ‘Four for One’, is very popular, to no one’s surprise. The accessible, headbang inducing riffs with a powerful chorus lead and a bridge that will leave you in utter awe of Rhythm’s skills as a guitarist. Darshan’s drumming provides a subtle yet sturdy backbone to the entirety of the album, the impact of which is arguably the most prominent in this song.

The intro of ‘The Shadow’ throws a taal count, hinting at the classical, before diving back into the jazz instrumental virtuosity that drenches the record. It offers a unique bass intro, swelling over onto itself and transforming into a supporting member for the rest of the song. What keeps the song dynamic despite the repeated licks toward the end is the variation in the drums, which turn into something completely unexpected and new, offering variety every time the listener may start to get used to the tones. Plenty of jazz improvisation predominates the general landscape of the record, but only up till this point.

The track ‘Run’ breaks the pattern by calling upon the vocalist Vasundhara Vee, who turns the song into her own little world of charm, growl and passion. Her almost RnB delivery fuses with a bit of rock-jazz, making the experience a pleasantly refreshing listen overall. You’d expect a chronological downer at this point on the album, which ‘Triple Threat’ lives up to, with an unexpected wave of blues that brings down the intensity of the listen. In a way, ‘Triple Threat’ sums up the essence of the whole album when it reaches an equilibrium, with jazz, rock and blues fusing into a high-quality harmony. Last but not the least, ‘Bandit Blues’ features classical vocalist Varijashree Venugopal and presents a one-of-a-kind output, a dazzling fusion of jazz, rock and classical music. Rhythm’s guitar tone complements Venugopal’s lush delivery with surprising ease. Both, the vocals and the instrumentals, alternate between taking the front seat, allowing space for the other to shine.

The act has an incredibly inviting feel to it, topped with a personal touch, as Darshan can be heard addressing the audience in the recordings. Live on Tour 2021 is quite a pleasant listen if you’re craving the likes of an outdoor gig, surely, and overall, a feat of undeniable virtuosity.