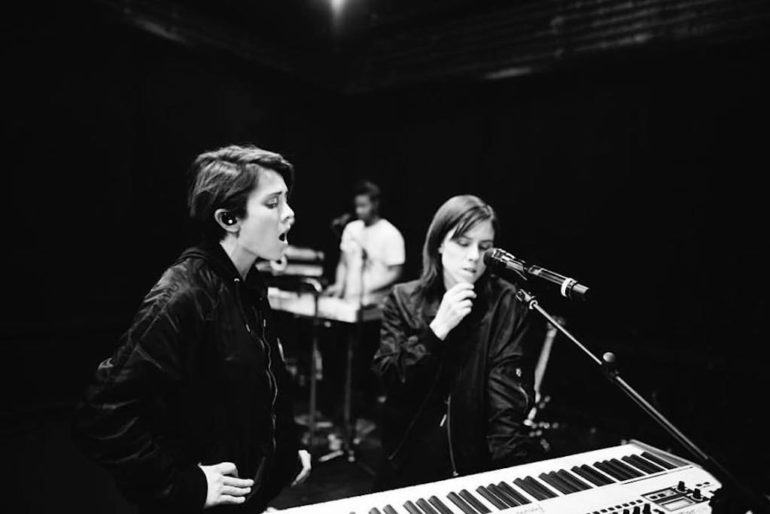 Tegan and Saras Love You To Death

In the past decade or so, Tegan and Sara had created a niche for themselves in the indie world. They were efficient purveyors of an often awkward compromise of pop and indie rock, with the hooks and melodies combined with persistent and angular guitars. However, by the end of Sainthood, the pair’s sixth LP that was released in 2009, they themselves recognized the want to breakout of the shell, which they had created, into poppier territories. They then collaborated with Greg Kurstin who had previously worked with Lily Allen, Kelly Clarkson, Sia, Beck, among others, to help them thrust into the pop stardom. It resulted in Heartthrob, one of the 2013’s surprisingly breakout album, full of melodies and hooks with their lyrics striking a delicate balance between insight and abandon, and their sound was so polished you could see your face in it. It was a reinvigoration of sorts, for a group who had seemingly reached a saturation point.

The duo, now with fresh legs, were on the up and up, releasing their biggest hit to date when they collaborated with The Lonely Island for Everything Is Awesome from The Lego Movie. They decided to collaborate again with Kurstin for their eighth album, who, himself, was having an autumn of sorts, producing and co-writing Adele’s “Hello”, which turned out to be the biggest hit of 2015.

The album starts off with That Girl, delving into self-introspection, whilst being restrained musically. It sets off a precursor to the album, with the running time being just short of 32 minutes. All the songs seems to have trimmed down, with the duo and Kurstin stripping away anything that wasn’t deemed entirely necessary. The album’s lead single Boyfriend, at first, seems disappointingly shallow, a casual inversion of society’s take on gender and sexuality. On repeated listening, however, one can argue that it would be a huge hit in 2007, perhaps with Jessica Simpson rollerblading in the one video. Dying To Know, a bumping electro-pop tune about wanting to reconnect with an ex, was a rarity, as it featured the sisters writing together, as opposed to their usual style of writing separately.

White Knuckles, one of the most honest songs on the album, details Sara and Tegan’s past conflicts and the fights that they had in the early years of the band. It is one of the very few indicators to Heartthrob, apart from the shift into pop sound. 100x, despite being the only ballad on the album, almost never sounds like one; it’s almost being sterile, despite there being genuine emotional exploration here, which has them turn meekly, but honestly, on each other. The sisters also are at their most expressive with regards to their sexuality, the song BWU sounding almost defiant to the conventional norms, of a relationship, of it not needing it to be validated through the institution of marriage, with the lyrics I don’t need a white wedding. U-Turn is another one of the introspection songs on the recording, musically drawing parallels to Chvrches’ sound on their first album.

Everything’s so slick, shiny and synth-driven, it feels like the emotional content is a bit of a bare-minimum job, compared to the broad confessions of old. There are moments, where it feels like they are ready to burst through into pop superstardom, but there are also moments where it feels like they are almost losing control of their identity and are dissolving into one of those middle of the road synth-pop groups, with one semi sleeper hit played in rotation on the radio. Still, they have shown the ability to mix it up and create works that they themselves are invested in, interested in and happy with, which points to an even brighter future for them.