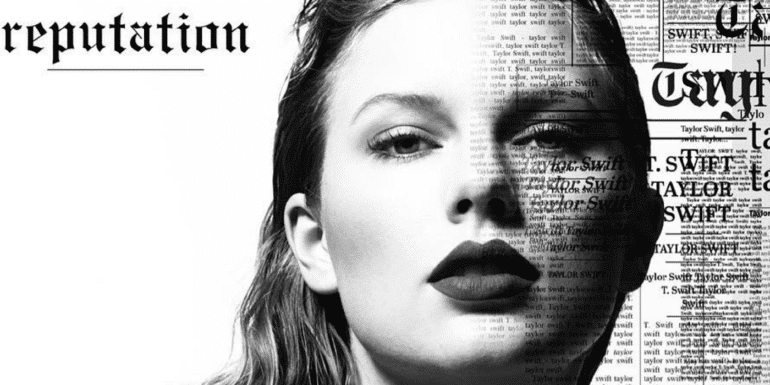 Reputation is the boldest statement made in the world of Pop music ever since Miley’s infamous performance at the VMAs alongside Robin Thicke in 2013. This is the rebranding of the decade and just in case you haven’t heard, the old Taylor is dead. Well, not entirely. Despite the over-elaborate and heavily marketed music videos, Taylor Swift’s Reputation is the most personal and upfront she has ever been on a record before.

‘…Ready For It?’ is a robust opener and cements the fact that this album is not going to be anything like the music we have heard from the ‘Lovestory’ singer. Lyrically, it serves a warning for what is about to happen on the one-hour long album as we are asked to “let the games begin”. Swift adds a certain kind of attitude to her vocals to match the newfound darkness in her music. This keeps up the new persona for a good portion of the album, especially on the first six tracks.

On ‘End Game’, which also features Ed Sheeran and Future, she talks more about her reputation and how it is so big and bad. But, as she goes on to claim in the next track, she likes it.

She has a bad reputation, aware of it, okay with it and she wants you to be okay with it too. She goes on to make that clear in every which way possible in the next few tracks. Anger and revenge are not conventional emotions to tap into to make chart-topping music but Taylor is more than up to the task. So, she put together a team to help her attack everything she has been criticised for and make it look and sound artistic.

It’s debatable whether ‘Look What You Made Me Do’ was a bold statement or downright petty. Although the level of sass is unmissable and even admirable, it is difficult to get used to her singing about coming back from the dead and the visual of snakes wrapped around her arms doesn’t help either.

From here on, the boldness starts getting a bit much and the album starts sounding stale. ‘So It Goes..’ is a little more of the same beats and makes you miss old Taylor’s guitar, even if it had teardrops on it. The songwriting on ‘Gorgeous’ and ‘King Of My Heart’, however, makes it clear that the old Taylor is not dead, but lurking in a corner somewhere. Her country roots resurface in the lyrics. However, she still relies on catchy but pompous beats to keep up the no-victim charade.

‘Dress’ is probably the closest this album gets to Swift’s Red days. The track adds an element of complexity to the hitherto one-dimensional album and gives more meaning to new Taylor’s existence. She gives us a peek into her soul on ‘Call It What You Want’ which makes it easier to understand her conflicts as someone who is always in the public eye. It implores you to feel some compassion for her. ‘New Year’s Day’, different from any other track on the album, serves as a mellow conclusion to a dynamic album.

Reputation is feisty in some places and reposeful in others. What it never loses throughout the course of thirteen songs, though, is passion. Taylor feels strongly and makes music that matches her personal state. The extravagant production and the style of her music strongly reflects the turbulence in her personal life. She is not a mellow person anymore, and neither is her music. Where the album lacks in melody, it makes up in terms of songwriting and vigour. It might bear the cost of excessive marketing and overplayed singles, but the album gives the sense that the old Taylor hasn’t died, but is transforming into a more self-aware and better adjusted artist. She is bolder and you just have to make peace with her new self.