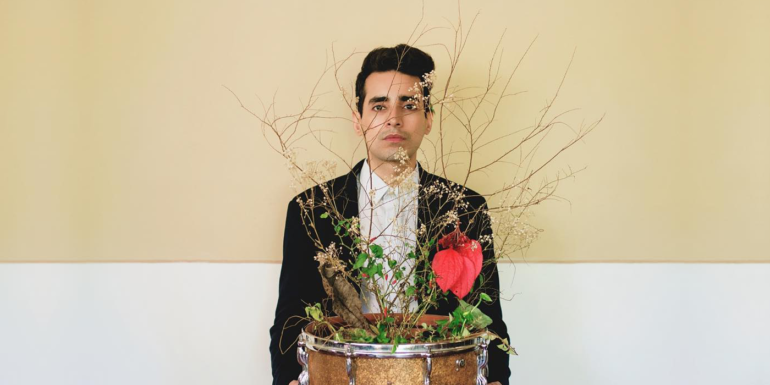 In an era dictated by marketability and superfluous appeal to the lowest common denominator, it takes a special set of skills and courage to go against the tide. New Delhi based Tarun Balani makes it look easy to swim against this tide by staying loyal to his passion for jazz music. At 18, Tarun attended Drummers Collective in New York City, an experience that drew him forever to jazz. This would lead him to study music at the prestigious Berklee College of Music in Boston a few years later. After developing an infatuation with drumming as well as performing and composition, he would go on to polish his skills by collaborating with various artists to create unique and boundary-pushing pieces of jazz music – a genre that many have considered to have sung its swan song ages ago.

In 2012 and at 27 years old, this collaborative work ethic would culminate with the release of his debut full-length album, Sacred World to widespread acclaim and a well-received live album, Live at Teatro Bismantova, Italy in 2014. His work was said ‘to point to the future of jazz’ and had taken the world of jazz by storm. His loyalty to his Indian roots infused into every nook of his compositions is a beacon of hope for a genre which has been relegated to a few niche communities in recent years. He conceptualised his latest full-length album, Dharma way back in 2016 and even released the title track in the same year. However, it would take seven long years for him to finally release his most complex and subtle work to date. Complemented by pianist Sharik Hasan, trumpeter Adam O’Farrill, guitarist Olli Hirvonen and bassist Raviv Markovitz, Dharma is as much an instrumental journey through the pressures of life as it is a voyage to the depths of his own psyche.

Dharma is a record that explores the pressure of life, a theme that has been time and again by the Dark Side of The Moons and the Downward Spirals of the world to great effect. However, on this record, Tarun strives to cut out the wordy middle man to deliver a purely visceral and emotional experience through a clever and heartfelt instrumental palette.

Like all concept albums, it would help to listen to the Dharma from start to finish as one cohesive audio essay. This is a testament to the smooth transitions between tracks and how all eight tracks unite to deliver a singular visceral experience. The opener, ‘Brooklyn Bound’, sets the tone beautifully with an incredible sense of urgency. The interplay between the pessimistic keys and the uplifting trumpet creates a yin-yang aesthetic with both emotions locked in an eternal tango. The percussion is introduced as a neutral element with a finicky sense of loyalty to either side as it alternated between being chaotic and steady.

The instrumentation throughout the record brims with time signatures shifts and improvisation which gives jazz its signature aesthetic. This is showcased best in ‘Impermanence’ with its unpredictable and temperamental time signatures. The melancholy keys and trumpet go one step further to deliver an experience similar to 40s noir films. This noir aesthetic is revisited on the title track with its moral ambiguity. The internal conflict is fleshed out beautifully by contrasting the naked keys clad in minimal and light background percussion with the subsequent keys shrouded by heavy percussion and trumpet.

Ideas related to exploration and liberation are also brought up. As the title suggests, ‘Samsara’ meanders and cruises through a cornucopia of emotions such as nostalgia and retrospection. The bassline and keys play off each other to compare and contrast the joy of exploration and the fear of the unknown. The more intense cousin of this track, ‘Gatha’ sees the keys break these shackles and indulge itself in blissful chaos and freedom. This is brought on by heavy and assertive keys soon to be followed by relentless hi-hats and syncopated drums.

Themes of inevitability and closure are explored at the tail end of the album, cementing its cinematic three-act structure. ‘Here We Go’ creates a facade of a flawless life while making it painfully obvious that this apparent perfection is not much more than a carefully curated illusion. The track is instrumentally simpler than other tracks with keys hogging the spotlight. ‘Malala’s Dream’ feels like a sequel to ‘Here We Go’ with subtle callbacks in the trumpet section. There is an air of Hitchcockian suspense as the muddy bassline trudges along with the help of persistent keys. The quiet guitar licks operate in what seems to be a different reality than the rest of the instrumentation but still maintains a paradoxical umbilical cord to them. The closer, ‘Planet Hunter’ is an optimistic yet sombre epilogue wherein the keys shimmer in the light cast by the trumpet.

Dharma is one of a kind in that it excavates a pathway straight to the listener’s repressed and seldom evaluated emotions. The tracks frequently feature clever interplay between contrasting moods that somehow complement each other (the yin-yang aesthetic mentioned above). As subjective as the above interpretation may seem, one thing is for certain – the album is as dense as a sparse instrumental jazz album can be. Speaking in tongues of elevator music, the record draws revelations and visceral reactions comparable to a spiritual awakening.

As pretentious as it may sound, the only fault of the album is its lack of indulgence. Its lack of extravagance. Its unwillingness to go that extra mile. Maybe that was the point all along. However, the album comes off as an eloquent writer who pens a political masterpiece with the potential to force change but lacks the punch and gall to actually start a revolution.

Needless to say, Tarun Balani and his exceptional quintet have created a batch of recordings that are as much about restraint as they are about pure emotion. Emotions that have existed long before language was a thing and will outlive it by aeons.