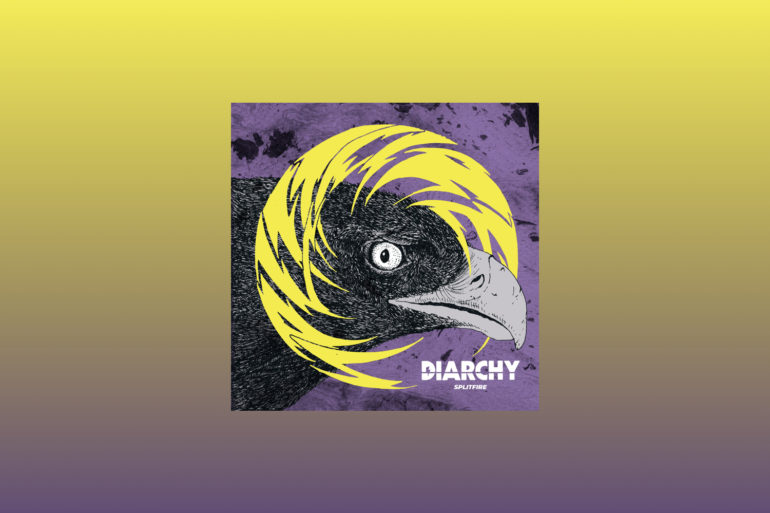 “Imagine a group of soldiers; tired and hurt after a day on the battlefield, spending the night in their trenches, knowing fully well that they are fighting a lost fight. The battle will begin again at daybreak, and they will not stand to see the next sunset. But that night, they celebrate.”

This is how Diarchy’s guitarist begins to explain the experimental outro of its sophomore album, Splitfire. The outro ‘Best Way Out Is Always Through’ finds itself in the league of compositions, which not many bands dare to break into. The first impression draws sonic and symbolic parallels with a song from one of the most memorable movies of recent times, 1917.

In the movie, the protagonist, against all odds, finds temporary comfort in a regime waiting to enter the battlefield one more time after a night of unsettled war, that will continue for another day. And while the soldier rests for the first time in the movie, Jos Slovick’s voice coupled with Craig Leon’s arrangement for ‘I am a Wayfaring Stranger’, drives the emotion home. It is not a usual war-cry, solidarity anthem or a typical cadence. Instead, it is a mild soothing voice passively reminding the few who survived so far that, before meeting their loved ones again, another cycle of turmoil and uncertainty awaits.

The scene is unique because of the movie’s evolution before it reaches the end. It is the first time that a frame did not include the two protagonists. The film went beyond that narrative.

Similarly, ‘Best Way Out Is Always Through’ is “experimental” because of the album’s evolution before it reaches the end. It is the first time the album does not include just its two protagonists. It impels the listener to hear the entire record once more.

The album begins with a different mood, one on the very other end of the spectrum. In the quintessential “stoner rock” ways, Splitfire opens with a track that introduces the band’s sound and style to the uninitiated: a gritty, intense welcome devoid of any repetition or predictability. ‘Kamal Hossen’, the opener, packs a punch with nothing less than a guitar-heavy track soon followed by drummer Tiwari’s ability to hold the listeners in thrall.

‘Tirunelveli’ brings the best of both the albums. The story behind ‘Tirunelveli’ is precisely the way it sounds. It is dark, enraging, and briefly vengeful. The song is based on one of the poems written by drummer Gaurav, after learning about an episode reflecting human tragedy. The album is filled with stories of societal and moral ills. Splitfire is not an escape, rather a confrontation.

The following track ‘Gone Too Late’ picks up where ‘Tirunelveli’ ends (and the same remains true across the album). In fact, the two tracks were earlier called ‘EQ1’ and ‘EQ2’. ‘Kraani’ and ‘Best Way Out Is Always Through’ pair up nicely. The song features Hindi news anchor Ravish Kumar’s voice before it enters a suitably powerful riff that fades out into the outro for the concluding track of the album.

‘Kamal Hossen’ came out of Hosenscheisser that translates to someone who poops in his pants, aka a coward in German. The duo, fairly connected to reality, has been honest to their perception of the society as we see it and did not shy from emoting their displeasure about it.

A careful selection of the first album Here Lost We Lie and Splitfire can translate into a protest album, but only ideologically. Lyrically, Diarchy continues to allow itself to roam freely within the emotions that derive inspiration for the two minds involved.

There’s an evolution beyond the music, within the ideology, as well. What makes Diarchy a force to reckon with, stems from their consistent agenda of creating a progressive, focused, and evolved form of songwriting. The songwriting has become fiercer and more tempestuous, like the artwork curated by the band’s manager and friend Anoop Bhatt. Rakagt, the two-headed eagle that features in their artworks, has evolved too. “He’s somewhat of a mascot,” informs Gaurav, and adds, “Anoop wants to continue using it on all our music.”

Mastered and produced with the assistance of Sridhar Varadrajan, Splitfire, unsurprisingly, highlights Diarchy’s identity. Owing to the current pandemic and the restrictions that followed, Diarchy has resorted to upping the social media game to promote the album. Lack of live gigs surely would hurt but, of course,  there is no expiry date for a showcase of a ‘recent’ release. The venues will wait for Splitfire. Diarchy waited three years to produce and release the effort, it is willing to wait for more. And so should you, if you are willing to listen to one of the finest rock albums, in the recent memory, with a live set-up.