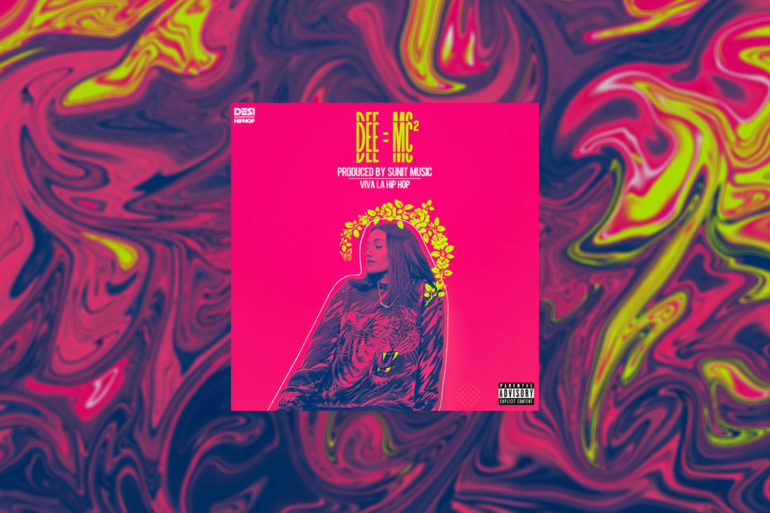 After dropping a slew of hit singles, touring in the UK, and talking South Asian hip-hop on BBC Radio, Deepa Unnikrishnan aka Dee MC has finally delivered. Her much-awaited debut album Dee=MC² launched to much fanfare last month in Mumbai, amidst the who’s who of urban contemporaries. Naezy and Raja Kumari came out to throw their support behind the young rapper who remains one of the first and strongest female pioneers of desi hip-hop.

The heart and hard work that has gone into making this album is evident. Deepa has been working on it for over two years, collaborating with peers like Poetik Justis (aka Trap Poju), D’evil, MC Altaf and Sense who feature on some of the songs. Long before it went into production, there was Dee’s clarity about how the album would sound. Incorporating lots of vibrant Indian elements so as to relate to the Indian audience was a top priority from the start. Deepa juxtaposes desi elements with codes of classic hip-hop. In the song ‘Rang’ and ‘Vadhaiyaan’, for instance, the intro constitutes a desi refrain played over beats that typically accompany freestyle. The diversity of themes, styles and voices is refreshing, and there is a delightful camaraderie among the artists. Dee also swings from rapping in Hindi to English, displaying a bilingual prowess that is reminiscent of Latinx rappers like Snow Tha Product.

The new album is produced by the UK-based Sunit Music whom Deepa met over the course of her tour, and whose repertoire includes working with MIA, Raxstar, Humble The Poet, Fateh and Badshah. The production on Dee=MC² , however, feels mostly uninspired and offers little new. Nonetheless, there are good moments, in songs like ‘Mumba’ where there are interesting vocal effects and dialogic samples, but especially when it falls away to allow Dee’s raps to breathe.

Deepa is not one to mince words. This candour, while welcome and reminiscent of a hip-hop lexicon from the early naughts, leaves much to be desired by fans of the genre today. Her style and delivery retain the same vibrancy of some of her earlier tracks like ‘Chaar Logo Ki Baatein’ and ‘Deeva’, which does adequate fan service now but also makes it difficult to chart her development as a musician. That explains why by the end of the album, the monotony of force and flow can hardly be ignored. Moreover, the project is largely devoid of any attempt to define or refine a unifying concept through allusions, anecdotes or poetic imagery, which conscious (western) hip-hop embraces over directness these days.

Instead, unsubtle and biting sarcasm cuts through each time Dee touches upon critical subjects such as generational divides, gender discrimination, colourism, privilege and positionality. More often than not, it’s the sustained impact of beats that propels the songs forward, except when Dee raps in English which is also when her flow and delivery improves. That said, the Hindi bits are significantly better-written. The lack of grace in the lyrics can also be seen as Dee’s way of letting feminine courtesy and the anxiety of politeness take a backseat.

To her credit, there is a witty play of words and cliches in most of the songs and Dee never stops having fun, even when she hangs fire with verses on womanhood or the intersections of gender, class and caste in India. All of this also lends her songs a loop value – they are never devastatingly gloomy or cynical like most works by her male counterparts, even while voicing grave concerns. Overall, she paints a picture of the “industry mayajaal”- her experience as a woman in hip-hop, how it empowers her and helps her channel the political and existential angst so common among youth today. ‘Vadhaiyaan’ satirises the older generations for offering unsolicited advice and making quick assumptions about millennial values, offering up a powerful stinker on how “riwaz ke pahiye” silences the rebel spirit. In ‘Rang’, she tackles society’s standards of feminine beauty, according to which fair is lovely. Gully Gang alumnus D’evil appears in ‘Mumba’, a catchy ode to the “sapno ki seher”. She specifically focuses on the invisible women of Bombay – like domestic and sanitation workers who work behind the scenes to keep the city moving in its electric pace – addressing labour rights and dignity for informal workers.

Cleverly alliterative and satisfyingly acerbic, Deepa also weaves the familiar note of braggadocio into some of the songs, positioning herself as a force in the hip-hop game to be reckoned with. In the title track which sets the tone of the album, she spits fiery bars about paving the way for future female rappers. ‘No More Running’ which features Poju is about setting your own pace without heeding to what’s expected or normative for aspiring musicians. She takes on budding rappers MC Altaf and Sense in ‘Piece of Mind’, going bar for bar while addressing the trials she underwent and sacrifices she made, as an up-and-coming rapper. It is perhaps the most diverse-sounding song, sampling Deep Jandu and Bohemia’s summer hit Arey Pagol Hoye Jabo’ as Dee trawls in search of a distinct artistic identity. In the seventh and final song, ‘Bars From The Heart’ we can hear the rapper tune out to affirmations – of her history and humble beginnings before going on to defy all expectations and winning by accepting challenges.

Drawing from a frame of easily accessible pop culture references, Dee=MC² thus paints a picture of pride, promise and anxiety that cuts across several identity lines – of Deepa Unnikrishnan as a brown woman, of Dee as a woke millennial, and of Dee MC as a hip-hop artist. Despite the album’s shortcomings, it has a lot of saving graces that casual listeners might enjoy and go back to, especially given the preponderance of issues relevant to the youth and the force with which they are presented – perhaps even jolting the listener, even if for a moment, out of apathy.