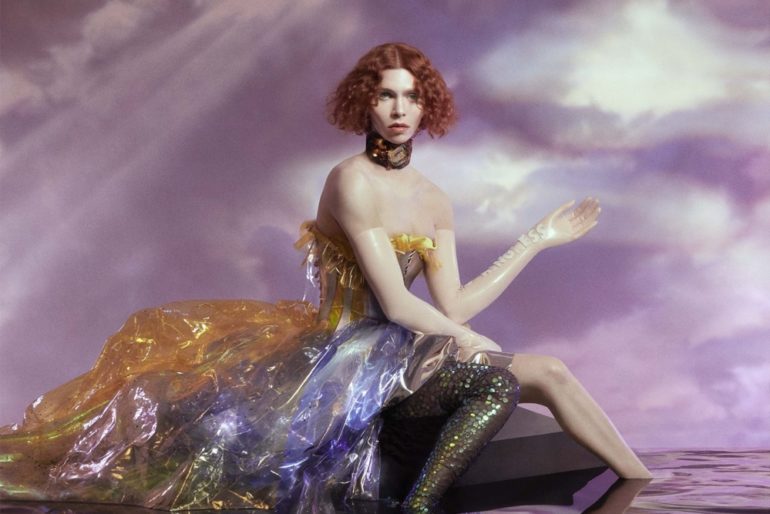 After producing music for acts such as Madonna, Charli XCX, Vince Staples and Let’s Eat Grandma, Sophie has established herself as one of the most exciting producers of the last five years. She had also released a compilation, Product in 2015. However, her image had always been shrouded in mystery, remaining in anonymity in front of the public eye and even in interviews.

This all changed last year when she released the single ‘It’s Okay To Cry’. The music video for the song marked the first time she had used her own voice and image in her work. It was a brilliant way to reveal oneself to the public and what followed is one of the most sonically transcendental and exciting albums of the year and perhaps the decade.

It’s only fitting that Oil of Every Pearl’s Un-Insides would start with ‘It’s Okay To Cry’. Merely classifying it as beautiful or tender won’t do it any justice at all. With twinkling synths and atmospheric sounds washing over the song, Sophie, for the first time in her own voice, talks about accepting one’s sadness in the midst of an identity crisis. It is a feeling that Sophie knows all too well and wants others to know that they are not alone. It is pop at its vulnerable best, yet it has that Sophie blueprint which makes it absolutely unique.

There aren’t enough adjectives to describe the next song ‘Ponyboy’, which is a BDSM-inspired banger. It has elements of J-pop and Eurodance all turned up to eleven, while also including elements of industrial music. It is arresting, surreal, explosive and dominating.

The jarring and punkish sound carries into the next song, ‘Faceshopping’. Accompanied by Cecile Believe, it is a social commentary and critique on the “personal branding” people carry out and the length to which they would alter themselves for maintaining the “brand”. The transition in the song to a more hyper-realistic, almost holy instrumentation with angelic, operatic vocals before disintegrating back into the main song is one of the album’s standout moments.

In ‘Is It Cold In The Water’, the song is surrounded by an ever-increasing crescendo of arpeggio synthesizer notes and repeating of the phrase with rising and falling vocals with SOPHIE experiencing extreme uncertainties and fears in anticipation of undergoing a change in self. It is a stunning track and feels ethereal. This also serves as a transition point in the album from the explosive to the more ambient. ‘Infatuation’ is the one true love song in the album with digitally synthesized voices later on giving way to an explosive and disorienting end to the song.

The most brilliant pieces of musical storytelling of this year are in the tracks ‘Pretending’, ‘Immaterial’ and ‘Whole New World/ Pretend World’. In ‘Pretending’ a six-minute instrumental with celestial synth sounds gradually increasing in volume, it feels like a world, and an identity is being built from the perspective from Sophie, even if there is a voice inside of her repeating that it isn’t real. However, it goes on for a bit too long and could have been trimmed down.

‘Pretending’ then transitions into ‘Immaterial’, a hyper-aggressive euro-pop and euro club bop, not dissimilar to Charli XCX. The song is a celebration of identities, with self-affirming lyrics, “I could be anything I want/ Immaterial boys, immaterial girls”. It is one of the smartest and most irresistible pop songs of this year.

The last track ‘Whole New World/Pretend World’ has a dual nature. ‘Whole New World’, with the influence of Autechre really showing in the track, is more comprehensible with shouts of “Whole new world” making it feel like a rallying war cry. However in ‘Pretend World’, the vocals get increasingly distorted while the instrumentation starts crumbling and fading, and the world built up in ‘Pretending’ starts to fade away, thus confirming her fears. It is a brilliant way to end the album on.

Sonically, the album pushes the barriers of what pop music can be, with hyper-realistic, hyper-aggressive and often surreal sounds of metal, latex and plastic. It also juxtaposes the aggressiveness with subtler sounds and instrumentations. It sounds nothing like anything in pop music, past or present. The album also confirms SOPHIE as one of the most exciting producers around. The album’s sonic transcendence coupled with the powerful statement of identity makes the album an absolute triumph and may be seen as a turning point in the trajectory of pop music.