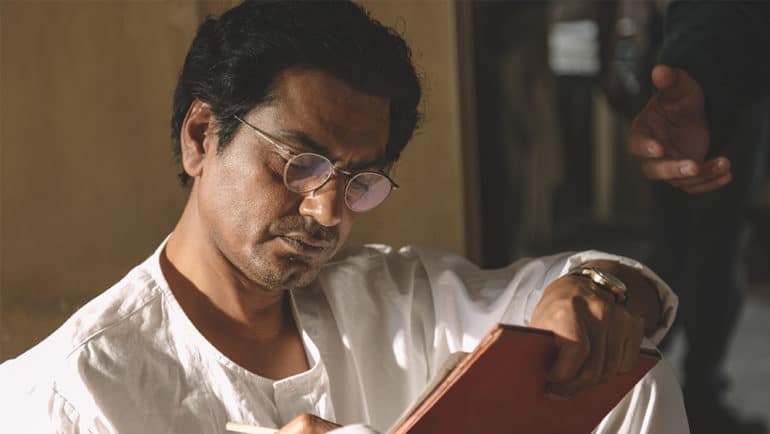 Nandita Das roped in Sneha Khanwalkar to compose the music for her much-anticipated film Manto. While it is tabla maestro Zakir Hussain’s background score that is a bigger part of the on-screen narrative than songs, understandably, Khanwalkar delivers the goods as far as the music album of the film is concerned, and the songs that do feature in the film fit the proceedings.

Written by Dibakar Banerjee and Sneha Khanwalkar, Rekha Bhardwaj opens the album crooning ‘Ban Titli (Gratis)’. The harmonium and tabla and Bhardwaj’s voice give the song the ‘retro’ feel but compared to ‘Ab Kya Bataaoon’ and ‘Nagri Nagri’, the production sounds more modern. The song, however, is very enjoyable.

Written by Simaab Akbarabadi in almost the same era as Manto lived, ‘Ab Kya Bataaoon’, sung by Shubha Joshi is a beautiful composition. The song manages to transport the listener to the 1950s. Khanwalkar mentioned in an interview with Mid-Day that in the past, “they would listen to jazz and Western music. Socialising for them meant having interesting discussions with great writers, directors and musicians at house parties. So, musically, I felt this could be interesting.” This is clearly evident in ‘Ab Kya Bataaoon’. The lovely use of Joseph Vessoaker’s trumpets accentuates the era, and also brings forth the world of Manto where there is Naushad, there is Hindustani classical but there is also the influences the musical influences the British brought with them, ones clearly part of Bombay Talkies of the time. Khanwalkar creates a lovely melody, for which Shubha Joshi’s accomplished voice is a great choice. It also fits Ila Arun’s on-screen persona, which is satisfying.

Sanaullah Sani Dar, popular by his penname ‘Meeraji’ wrote ‘Nagri Nagri’, a ghazal that has been rendered by many greats. Khanwalkar has composed a really wonderful version for Manto and is sung by the masterful Shankar Mahadevan. The ghazal has a 50s filmy touch, and Khanwalkar’s own style shines through the entire composition, with Shankar Mahadevan’s fast-paced vocals almost sounding like he is rapping towards the end of the track.

Faiz Ahmed Faiz’s ‘Bol Ke Lab Azaad Hain’ is used to end the film. Khanwalkar creates a befitting melody for the nazm that Rashid Khan & Vidya Shah croon. The song is perfect for a credit roll with still images from the film adorning the screen at the time.

Standing out from the rest of the album, and perhaps why it’s not even part of the YouTube ‘jukebox’ is ‘Mantoyiat’, composed and performed by Raftaar. The song was used as a clever promotional tool and works because Raftaar talks about contemporary societal issues in colloquial and arguably questionable lyrics, which are followed by Nawazuddin Siddiqui’s Manto voice and words, conveying how things haven’t changed much and the world we’re living in is still ‘Na Qabil-e-bardasht’.

Overall, the Manto album is an enjoyable one, and it is really good to have Sneha Khanwalkar back.