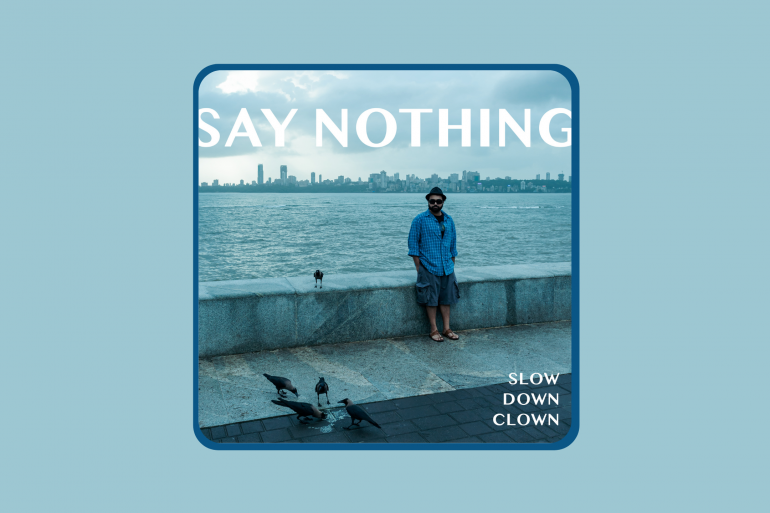 The Great Quarantine of 2020 took a lot away from us. Think of all the date nights and chill sessions with friends that you had to put off; travel plans that didn’t make it to reality, and couple’s nights with your significant other that you had to reschedule.

The global pandemic took away our shot at making new memories, but lucky for us Slow Down Clown’s Say Nothing gives us a chance to live out the memories we never got to make. Soaked in soft rock instrumentation and the warm sparkle of indie-folk songwriting, the Mumbai based band’s 2021 release – a remastered catalogue of all their biggest career hits – is a wave of nostalgia waiting to engulf you.

Slow Down Clown is often described as a genre-spanning group. Their music traverses rock, pop-rock, indie-folk, indie-rock, and everything in between. It’s no surprise then that their latest album, Say Nothing arrives as a star-spangled banner of music, with songs for everyone and every moment.

The first track, the self-titled ‘Say Nothing’, comes in strong, giving the listener no choice but to perk up and listen. Complete with rhythmic guitar riffs and high energy percussion, the album begins with a bang. A similar tone pulls you in on their second track, ‘Punch Drunk Love’, an upbeat, slightly pop-punk ode to young love. While listeners encounter familiar territory with the first two songs, it’s the work that follows that pulls you in into a songwriting rabbit hole, packed with evocative refrains and melancholic rhetoric.

In fact, think of this 8-track album as couplets of four moods; all associated with being in love. Where ‘Say Nothing’ and ‘Punch Drunk Love’ are unabashedly expressive, ‘Two Candles’ and ‘Heartstrings’ are slow-rock renditions of vivid contemplation. That mood carries on into ‘Just a Coincidence’, the four-member group’s brightest “songwriter” moment on the album. Reminiscent of the kind of indie acoustic-rock associated with Bon Iver and The Lumineers, ‘Just a Coincidence’ arrives at the perfect time, offering a moment of reflection in pace.

But if there’s one thing that Slow Down Clown do well, it’s being cheekily unpredictable. The quartet jolts you right out of those melancholic musings with the track, ‘Tonight (I Swear I’ll Get it Right)’. Packed with groovy guitar work, a rhythm that hooks you and moody vocals, the listener is led into the final tracks, ‘Keep You’ and ‘Stupid Sea’. The album ends on a high in every sense of the word.

Speaking of the release, Vitek Goyel, founder of the band, said “I’m excited about putting these albums out for a new generation of listeners who couldn’t be there ten years ago”, Vitek says. “Even our older fans who bought our CD’s or downloaded the music will find a lot to discover in these reissues, with Say Nothing sounding almost completely different from the original. We went back to the original recording session files and reimagined it to line up closer to what I had in mind at the time.”

He added, “It is exciting to have Slow Down Clown’s music available on all digital streaming platforms for our fans to have access to our earlier releases, as well as some new music that is in the works.”

Say Nothing, originally the band’s debut EP, has been remastered to form the 2021 version and is a celebration of the tenth year since its initial release. Fans can also look forward to the bands follow up full-length release, Forget the Night. The project will be reissued soon in a remastered format including live tracks taken from gigs around the time of its release.

The 8-track compilation, Say Nothing is a genre-spanning, mood making roller coaster. With every track tugging at a different heartstring, the Mumbai based group will have you craving moments that you haven’t lived yet. Dive in; Slow Down Clown is holding the door wide open.