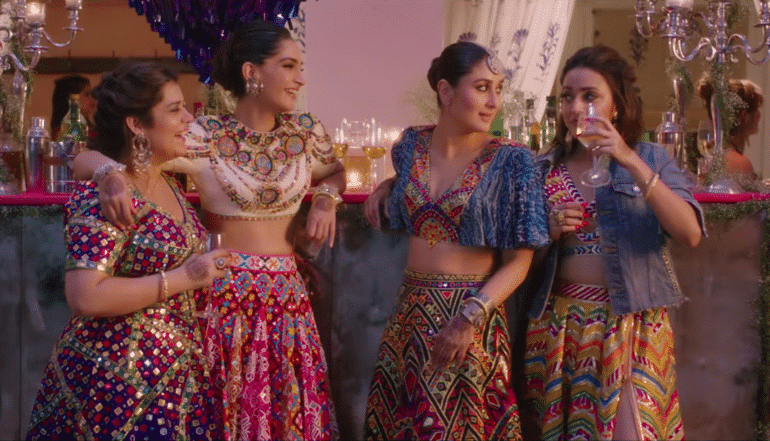 Bollywood is very comfortable going with multiple composers at the moment and the upcoming female buddy comedy film Veere Di Wedding sticks to this trend.

Qaran composed and Badshah sung ‘Tareefan’ was the lead single from the album and has already found great love among the masses – Sonam Kapoor dancing to it at her wedding also amplified the appeal. The song is already a party favourite, but there is nothing exceptional going on (it’s not to say a song in this genre can’t be better and sound different, Sachin-Jigar’s ‘Bandook Meri Laila’ is a great example to prove this).

Shashwat Sachdev composes a zingy electronic number in ‘Pappi Le Loon’, with Sunidhi Chauhan singing (almost rapping in periods) rapidly. The whacky lyrics composed by Shellee work for the track. It is, however,  too one-dimensional apart from the main ‘drop’. Sachdev ‘Bhangra Ta Sajda’ which employs Neha Kakkar and Romy (who was a mainstay in the composer’s Phillauri album) sounds like Kaalakandi‘s ‘Kaala Doreya’ but falls flat in comparison. Sachdev has composed, sung and penned ‘Bass Gira De Raja’ and it is an applaudable effort. The song is fun, and one can predict that it would fit perfectly in the premise of the movie. Sachdev’s fourth and final song on Veere di Wedding is Arijit Singh sung ‘Aa Jao Na’, a song that rests on an ambient musical arrangement.

White Noise, Sachin-Jigar’s artists and repertoire venture, has composed ‘Laaj Sharam’. The song starts with a great vibe and beat, and Jasleen Royal particularly sounds great on the vocals. However, the song vanes off to the similar Punjabi wedding dance territory and then falls flat. Eventually, with Divya Kumar’s forced chorus and Enbee’s rap, there seems to be a lot going on, and ends up resulting in an awkward mishmash of things.

Vishal Mishra has composed two tracks for the film. ‘Veere Veere’ is the soundtrack’s most instantly consumable one – it has a breezy vibe, the sort Vishal-Shekhar delivered with ease a few years ago. The song has a lot of singers coming behind the mic, but it is the distinct smooth voice of Aditi Singh Sharma that stands out. ‘Dagmag Dagmag’ is equally interesting, and Mishra sings alongside Payal Dev. There are resemblances to Amit Trivedi’s quintessential style, which is a good thing in this case, as the track doesn’t sound like a replica, instead thrives in what it is.

Overall, Veere di Wedding’s soundtrack promises to sit well within the movie. As an album, it is Vishal Mishra’s work that impresses the most, and after impressing in Qarib Qarib Singlle, Mishra proves that he is one to keep an eye on in the future.