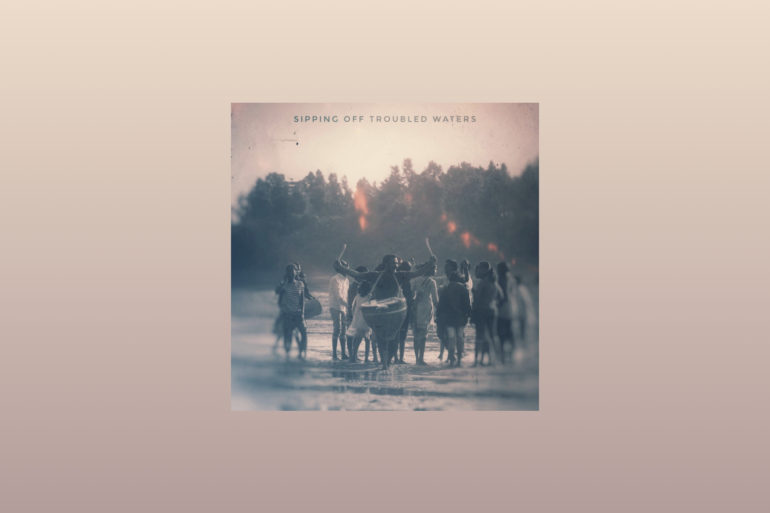 Ranchi-based producer and MC Sumit Singh Solanki released his debut full-length album Sipping Off Troubled Waters, which provides a personal account of the political violence of the rapper’s home state. The production by Solanki, who goes by the moniker of Tre Ess, evokes the rich musical tapestry of the region by cleverly weaving tribal percussion with more modern textures, from hip-hop beats to jangling guitar riffs.

Released under the experimental indie label nrtya, the album features a whole host of collaborators. Each brings their own unique flavour to their respective tracks, from Bangalore rapper Smokey The Ghost to sixteen-year-old Dheeraj Kumar Gupta, a visually impaired student and multi-instrumentalist from St. Michael’s School for the Blind in Jharkhand, who previously collaborated with Tre Ess on the single ‘Dil Aziz’.

The opening track ‘Drip’, true to its title, features an assemblage of trickling beats and whirling synths. The song continually shapeshifts between Tre Ess’ verses, a sample of female Hindi vocals and audio recordings meant to sound like an answering machine. It sets the tone for the album’s hazy quality, and like many of the tracks that follow, resists fitting neatly into any predictable form or structure.

While the second track ‘Dough’ is a playful take on consumerism and contains an irresistible hook sung in a chipmunk voice: “Whatever you do, gotta get that dough”, the third track ‘Aparna’ is more introspective. Neo-soul guitars and clinking beats play while Tre Ess waxes unapologetically about carving his own path and staying true to himself.

Next is an interesting track ‘What Do Kids Know’, which begins with an 808 drum machine layered over tribal percussion. This becomes both the track’s driving rhythm, as well as its main hook. It instantly recalls the ground-breaking Black Panther soundtrack, yet around the halfway mark, the beats suddenly stop, plunging the listener into a dark abyss of echoes and distorted synths. While the initial effect is impressive, the increasingly experimental direction that follows leaves the track disjointed altogether.

‘Mei X Superpower by 2020’ and ‘Owl Hours’ similarly play around freely with form and incorporate tribal sounds, whereas ‘Fakir’ follows a tighter structure. The choice to ground lilting Urdu vocals and dhol drums in hip-hop beats is an inspired one, sparking the kind of magic that happens when two worlds collide.

Tre Ess leaves the best for the last, with the standout ‘Troubled Waters’ closing the album. The sounds of gushing water, east Asian instrumentation, plucked double bass and syncopated pianos are slowly drip-fed before coming together to create a sizzling chorus that grooves and sputters.

At times, Tre Ess’ verses are either too heavily distorted to clearly make out or they are drowned out by the complex and busy production, with his delivery lacking the punch and flow of the jittery beats. The looseness of the songs’ structures, too, lead them to take unpredictable turns that sometimes hit the listener out of the left field.

As the album’s title suggests, the songs navigate the troubled relationship between the state and the indigenous people of Jharkhand. Yet the album’s political undercurrent, whilst ripe for hard-hitting lyricism, never feels fully fleshed out. For its sheer production and original sound alone, however, Sipping Off Troubled Waters signals an exciting new voice in the Indian hip-hop landscape.