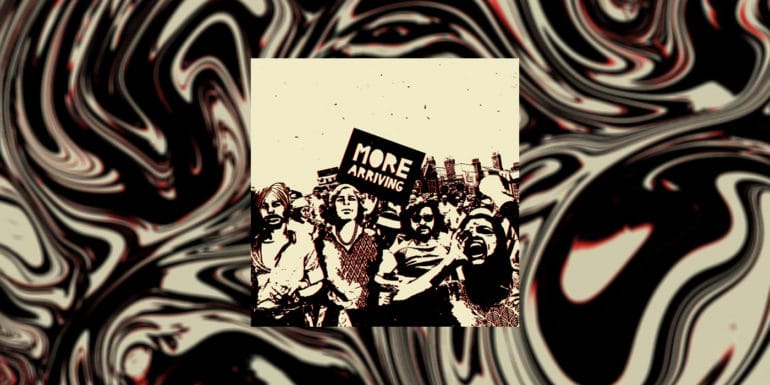 In the growing sonic sphere of Indian diaspora putting out music, some of them are clearly conflicted with what part of themselves they want to project. Some overuse desi tropes, others forcefully inject Indian classical instrumentation (samples, since that’s way easier) and don’t get us started on the music videos and visual aesthetic of it all.

Sarathy Korwar is not one of these, because as much as it’s understandable that diaspora Indians are perhaps seeking clarity on their Indian roots, at least your music needs less confusion and more conviction. Less mish-mash and more mashed up, for starters.

Even if Korwar has spent his time in Chennai, Ahmedabad, and was born in the U.S. and currently lives in London, the drummer/percussionist and producer’s latest album More Arriving brings together all the strong voices he needs to make his case for pluralism. Like on his debut album Day to Day – which featured folk musicians from the Sidi tribe/community – Korwar prefers to let these voices be as authentic and untouched as possible on More Arriving.

The first one is MC Mawali from hip-hop crew Swadesi, who paints the real deal portrait of Mumbai and Bombay on ‘Mumbay’ and how they’re not too different for him, as someone who learnt from the streets. The song introduces Korwar and his band as well, featuring Danalogue (from jazz/electronic/psych act The Comet Is Coming) on synth duties, baritone saxophonist Tamar Osborn and pianist-composer Al MacSween. ‘Mumbay’ zones out with Korwar familiar percussive style and into a short interlude called ‘Jallad’, a clip that transports us to a room where a young, unnamed rapper is talking about James Brown.

The menacing synth-sax combo sets the tone for ‘Coolie’, featuring two top-tier MCs sharing the mic – Delhi Sultanate (from The Ska Vengers) and Prabh Deep – uncovering the history of colonialism past, present and perhaps future in India. With a swirling synth line running in and out of the back, Delhi Sultanate brings his acerbic takedown of companies and governments, while Prabh Deep alludes to the anti-Sikh riots of 1984, rightly foreshadowing what his next lyrical material will bring.

From here, More Arriving weaves in and out of Korwar’s many worlds – concerning itself with immigration, class, cities and the brown identity. As a composer, Korwar pulls his weight whether he’s getting vocalist/MC friends or going fully instrumental. The powerful nine-minute harmonium-aided ‘Bol’ has Bangladeshi-origin poet and rapper Zia Ahmed over a seemingly A.R. Rahman-esque Bollywood bassline, as fusion vocalist Aditya Prakash goes off on a hair-raising range. Ahmed throws in all the desi stereotypes you can think of, except with (what we imagine to be) pokerfaced delivery – “I’m curry house of the year 2015. I am rogan josh. I am so damn lost.” – that heightens the mood.

Where ‘Bol’ ends on a cacophonous crescendo, Ahmed carries his verses into ‘Mango’, taking us through all the questions that non-white people have to field, over a tribal, folk and freeform percussive movement. On the cinematic, noir-jazz ‘City of Words’, Mumbai rapper Trap Poju seeks answers and hopes for solidarity but only briefly. The 12-minute track perhaps aims to be a mood-setter, but after the hectic pace of the preceding songs, a searing track like this might be a laborious listen to some. But it’s essentially prepping the listener to the closing part of the album – classical singer Mirande taking centerstage on ‘Good Ol’ Vilayati’, which is almost crafted like a subverted Indian classical piece and Abu Dhabi based writer Deepak Unnikrishnan speaking in alternating tones over a downcast riff on ‘Pravasis’.

More Arriving is undoubtedly a power-packed look into the brown identity that would educate anyone unaware about desi culture and subcultures. Even if the music is not exactly accessible throughout, Korwar walks the fine line between earworms and art-jazz, which is a pretty big net to cast.