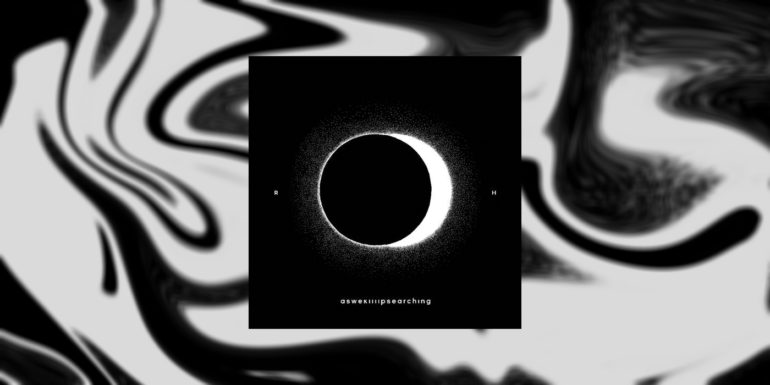 Around the midpoint of this decade, the plates beneath the Indian music industry began to shift ever so slightly. The explosion of musical virtuosity, adventurous concepts and a thriving desire to stand out and express oneself coupled with access to state of the art technology and of course, the internet, has led to a mini-renaissance in the scene. How does this relate to a couple of musicians in Ahmedabad back in 2015? In a few short years, the innocuous home studio project comprising guitarist, vocalist and songwriter Uddipan Sarmah and guitarist Shubham Gurung evolved and morphed into the post-rock quartet with bassist Robert Alex and drummer Gautam Deb under a uniquely minimalistic moniker, Aswekeepsearching. Ever since its inception, Aswekeepsearching has managed to appeal to listeners all around the globe with ever-increasing ambition and complexity.

Its breakthrough debut album, Khwaab, saw an uncharacteristically mature band boldly wear its influences on its sleeves. The dynamic soundscape of the album brought the band fame and recognition overnight in the airwaves as well as in the touring circuit. Its follow-up, Zia, saw the addition of electronic sounds, elements of synth and progressive rock into the mix. It also featured a bolder sonic direction with dense and introspective lyrics, lavish textures and enthralling emotional highs. With these two albums, Aswekeepsearching carved a unique identity, a passionate and rapidly growing fanbase and a reputation of being unpretentious and commercial without having to water down its sound. However, even at this point, it did feel like the band was holding back and not being as bold, emotive or personal as it could have been.

The recording of its latest release, Rooh has a lot to uncover. The departure of drummer Gautam Deb (replaced by Sambit Chatterjee) has left a deep scar in the band’s fabric. Behind the scenes, the conception, recording and mastering process of the album went through cycles of insecurity, uncertainty and incisive fissures. Overcoming these hurdles and coming out strong at the other end saw the release of one of the most ambitious, potent and game-changing musical escapades in recent memory. Rooh, in many ways, is an incredibly personal album. The songwriting on every track of the album is thoughtful, and almost impenetrable. The emotional depth underlying every verse is overwhelming, but manages not to appear to be vulnerable. The band wears these hardships and broken emotions as a badge of honour, and consequently, the album remains immune of the torrents of emotion that engulf it.

The album features eight tracks – four “main” songs with long, drawn-out themes and instrumentals which are interspersed with shorter, mostly instrumental “breathers” that give the album a sense of ebb and flow. It all starts with the opener, ‘Chasing Light’ that beckons us in with these enveloping and suspenseful synths with bits of static mixed in. As the track progresses, we see more and more instrumentals being stacked one after the other. The dense but patient progressions build up steadily and create a massive wall of suspense which coalesce into the introspective lyrics about being unable to decipher the meaning of life and the uncertainty behind every single step. The wall erupts into a magnificent eargasm, and the dust and debris of the aftermath create a suspended and expansive atmosphere which the vocals coarse through effortlessly. This leads into ‘Green and Blue’ which features a synthy, cyberpunk intro that leads to more textures and synthetic melodies. The magnificent vocals are accented by the soaring instrumentals. The incredibly raw lyrics pull off the impressive feat of traversing an entire character arc with the completion of this romantic odyssey in just over four minutes.

The intro of ‘Aas Paas’ feels very familiar and echoes some of the apparent progressive rock and post-rock influences on the band. We get the heavy drums and enveloping basslines that we should be used to by now, with some wailing synths hanging in the background. The introduction of a sarangi into the mix gives the track a sense of despondency and loneliness. Like all of the tracks on the album, the instrumentals and vocals blend seamlessly, owing to the meticulous production. Uddipan’s lyrics talk about how important it is to get lost once in a while as long as one does not fall asleep. Every prolonged note from the vocals and strings penetrates the soul with the zeal and grace that can only be replicated by someone who has indeed been lost and knows of the value of every experience along the way.

‘Eneke Najaaba’ is a short interlude, awash with glitzy, perforated synths offers a much-needed breather, allowing the listener to reflect on what just happened.

The title track features an energetic and marching rhythm section with the impatient drums and pulsing bassline. An interesting departure from the post-rock playbook, this track is carried by the vocals. Keeping with the themes of the album, the lyrics still feel uncertain and precarious. From seemingly out of nowhere, the song explodes into this haze of soaring instrumentation, leading up to a crescendo. ‘A Night in Zottegem’ is an instrumental interlude which is one of the more intimate cuts on the record, feeling more heady and cerebral. The hopelessness and uncertainty persist, but the glistening keys and guitars deliver a sense of acceptance with sparse amounts of hopes inscribed. It is a touching and pleasant breath of fresh air with an almost John Williams-esque orchestral quality to it. The lack of tangible lyricism does not hold the track back from bombarding the listener with sweeping pellets of ethereal ardour.

‘Aitbaar’ starts as a minimal track which is mostly acoustic but helps to preserve the spacey feel with some reverb added into the mix. The soulful vocals herald an intense build-up of the song with an ever-escalating tension that withholds the cathartic release that by now, we are conditioned to expect. The song crashes into a trough, and leads to an emotional outro. The track features some of the vaguest, and layered lyrics on the album. The desperation and despondence in the voice make for an emotionally authentic experience. The track ends with the sound of the singer getting up, leaving the studio and slamming the door, which is the perfect way to close a track with this level of potency.

The emotional authenticity behind the conception of every track is mesmerising. The theme of uncertainty and not being able to deal with a stage of life where your flashlight gives up on you is woven so masterfully into every track of the album. The musical virtuosity of every band member deserves praise. However, what ultimately sells the emotion of the album is Uddipan’s vocal performance and his capability to lay bare what he and the band is going through.

Nothing in the album feels out of place, nothing feels too long or too short, nothing feels pretentious, and nothing feels understated. Records like these are what makes the gold standard of what musicians need to aspire to be. Rooh is the inevitable addition to a discography that has been watertight from its inception and will be instrumental in lifting the veil of what lies ahead in Indian music for years to come.