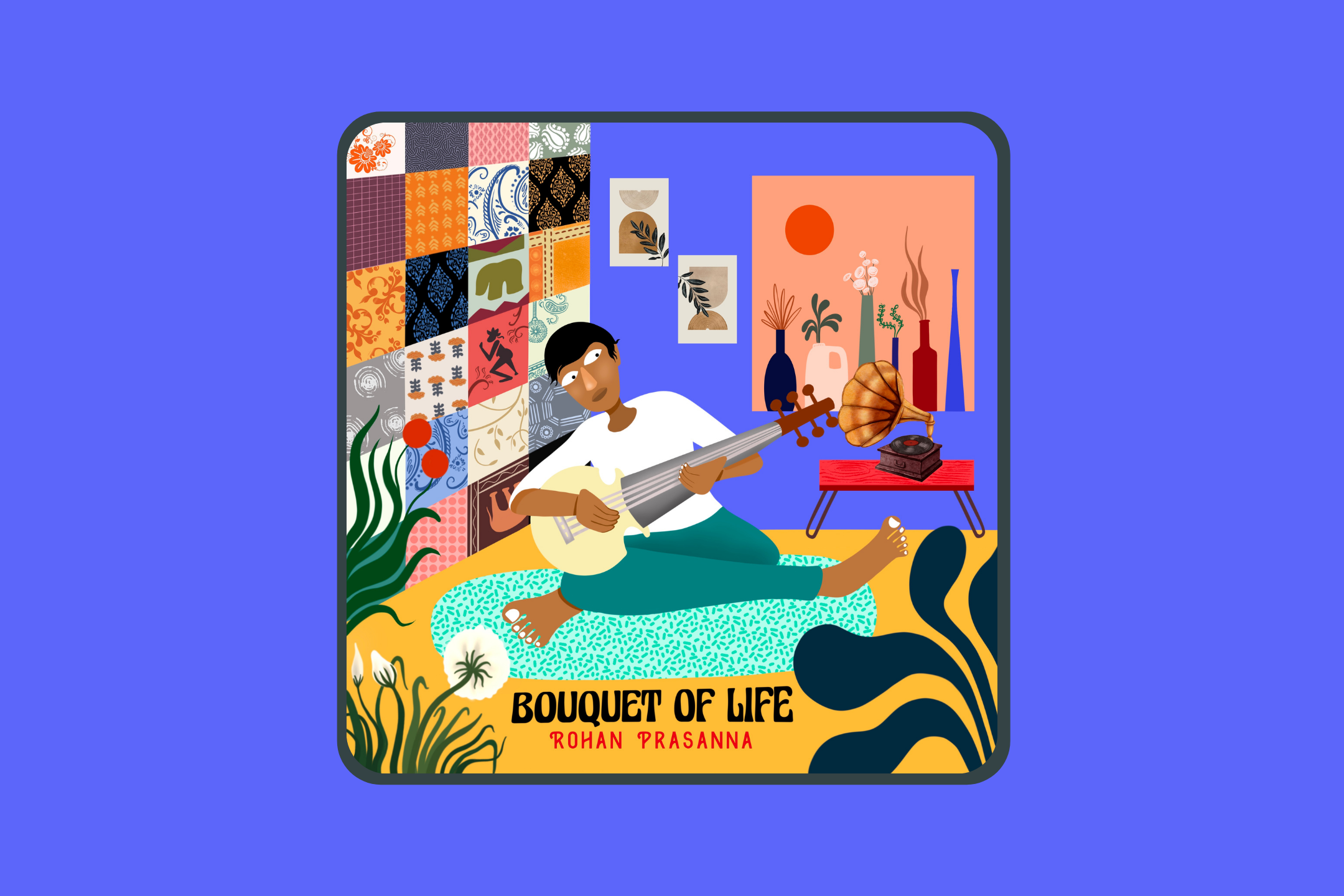 New Delhi artist Rohan Prasanna has had a long-standing training in sarod from the age of seven—by Ustad Amjad Ali Khan, no less—so it’s safe to say that he knows what it means to be rooted in classical norms, but also experiment.

His guru Amjad Ali Khan has had decades of formidable fusion excursions (most recently with guitarist Joe Walsh), and Prasanna is clearly no stranger to it either. He has collaborated with New Delhi artists such as Anirudh Varma and the Revisit Project. Most recently, his work with rock band Kitanu also came to the front, with the release of their debut self-titled EP.

Setting out on his own with his album Bouquet of Life clearly means being totally unrestricted, if stylistic
limitations were ever in fact an issue for Prasanna. As a vocalist, songs like ‘Out of Body’ and ‘She’s Like
a Breeze’ ease the listener into fairly new sonic terrain—there’s classical vocal melodies, whistling and
sarod, that’s almost played like a guitar. Then, on ‘Too Much Bro’, there’s a lot of abstraction, going from
funky grooves à la Jacob Collier or Vulfpeck to what seems like an intentionally discordant shift into a
classical sarod movement.

It’s confusing at this point, but in an intriguing way. Because we don’t hear that side present itself again
for a bit, given the tranquil and vibrant mood of ‘Melodies of Enlightenment’ and the transporting jazz-
fusion style of ‘Camel in A Club’, where Prasanna’s hushed a cappella sits subtly amidst swirling
Middle Eastern melodies.

Prasanna returns to that sneaky, unpredictable style we’d heard before when we get to
‘Intellidjentlewomen’. He picks away at glistening melodies and an (obviously) djent-
informed rhythmic pattern. It’s shapeshifting and ambitious, which means it could fail to hold one’s
attention for its seven-minute span but if you’re a fan of prog bands like Animals As Leaders, there’s
something in here that will keep you hooked.

After scaling what is arguably a summit of experimentation on ‘Intellidjentlewomen’, Bouquet of Life
wanders into the abstract space with mixed results. ‘Singing to You’ might stand out on its own, but in
the flow of the album, it does little to hold one’s attention. ‘Room Vibes’ maintains the jam-like
aesthetic that Prasanna has constructed on previous tracks, but doesn’t sound too different from what
we’ve heard before. ‘Why You Goin’, however, sees Prasanna bow out strongly. There are dance beats
straight out of an Indian street procession and jazz vocals going with strong keyboard melodies, with
Prasanna, phasing in and out of them.

The Collier influence is undeniable in Prasanna’s playfulness and while the sarod artist has got a lot more styles in the mix on Bouquet of Life, it could still do with some more finesse.