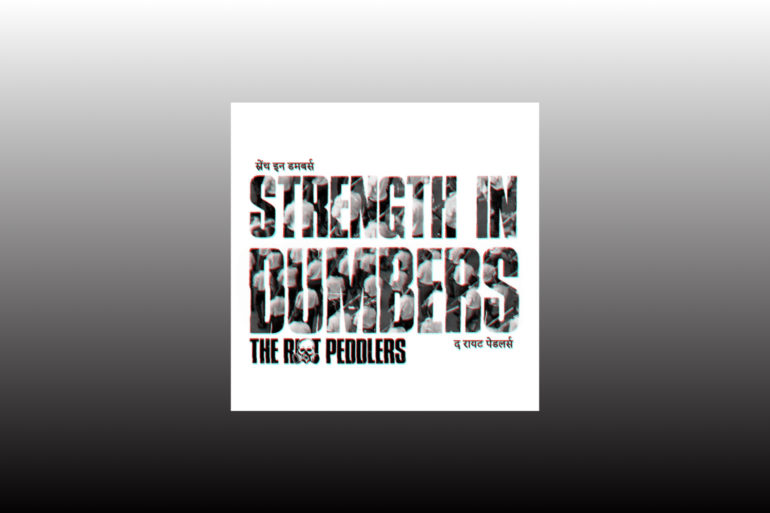 As far as time capsules go, music takes the cake. The cultural identity of us as a united species has a direct impact on the art that is conceived in any particular period. Turbulent political and social climate coupled with an increasing sense of pessimism and dread about the future of our race spawned the punk rock movement. The Riot Peddlers make their comeback in a stormy 2020. Disillusionment and angst lie at the core of the band’s energy. The band consists of Arun Ravi on vocals and guitar, Animesh Das on bass and Dhruv Sarker on drums. They made their explosive entry into the scene from their roots in Mumbai with their debut EP, Sarkarsm back in 2012. The energy and no bullshit attitude that the trio presented on the record was unprecedented in the Indian indie scene.

After a long hiatus, the band finally deliver their second body of work, Strength in Dumbers. Clocking in at just under 17 minutes, the EP has no time for frills and cheap thrills. From start to finish, the band gets right to the point – an approach that works perfectly given that the tracks barely cross the 150-second mark. The tracks feature heavy, angular guitars and no space to breathe. All five tracks come together to form a cohesive distortion soup that many soup veterans would fail to stomach. The raw emotion, honesty and incredible energy displayed by Arun dips its toes into horrorcore like in the track, “Insects Attack”. The song is unpredictable and keeps you on its toes for the entirety of its runtime. The angular and haunting guitars, along with Arun’s haunting vocals create some incredibly dark imagery by extrapolating the insect metaphor used to convey his disaffection with the current system. The versatile lyricism by Arun on “Muslim Dudes on Bikes” inserts a lot of tongue in cheek analogies with a sense of humour that would make the average samaritan recoil. The aggressive and dark lyricism embodies the violent, outrageous and offensive ethos of hardcore punk. The case is the same for the track, “Untitled”, which also has some great guitar interludes and riffs with distorted power chords that skirt the boundary between agony and pleasure.

However, the album does suffer from some flaws. Namely, the production choices do little to highlight Arun’s vocals and the message gets lost in the sea of distortion and noise. The tracks fail to stand out on their own right and instead blend into each other until it is nearly impossible to tell them apart. A prime example of this is the tack, “Your Love Songs”. Although the satirical portrayal of love is witty, the instrumentation morphs into a blistering trail of shredded guitars and broken drums. The compositions come off as slightly derivative and forgettable. The depictions of violence come off as a forced or desperate attempt to instigate backlash.

Strength in Dumbers finds the band playing to its strengths. Although the album isn’t cutting edge, it is still challenging for the uninitiated. The raw intensity delivered on all tracks is infectious. The lyrics are the embodiment of killing someone with the blunt end of a loaded pistol just because it takes longer for them to die. However, the album does suffer from a lack of originality in the instrumentation side and the production. Regardless, the band gives us 17 minutes of pure uncut anger, and we can do little more than be grateful to them for it.