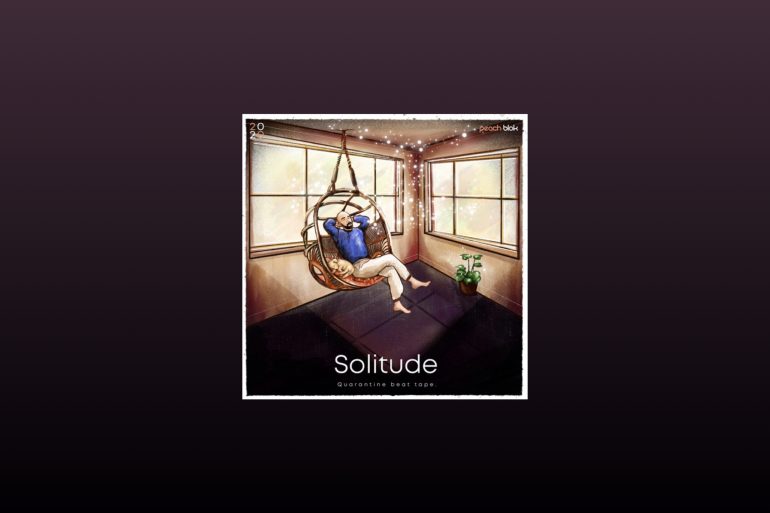 Instrumental hip-hop beats have experienced an explosive resurgence into the mainstream over the last few years. This new incarnation has indeed morphed into its own genre and is rooted in elements of old school hip-hop, jazz hop, and R&B. Needless to say, it wouldn’t have been possible without the pioneering work of legendary record producers like J Dilla, 9th Wonder, and Madlib. Bangalore-based DJ and producer Peach Blok aka Rishii Rohra pays homage to these greats and dishes out his take on the genre and more in his latest beat tape, aptly titled Solitude (Quarantine Beat Tape).

This is the producer’s second release of the year and his second beat tape in the span of the lockdown. Rohra mentions that the lockdown boosted his creative process, pushing him to take stock and finish the projects he had started. While he managed to wrap up his last release, That 90s Beat Tape, in a week, he wanted to take things slower with its follow up. “I wanted to put out something that I spent time learning, and wasn’t rushed”, he says. And this does check out in how meticulous, yet effortless, this project sounds.

“I wanted to write a beat tape which was primarily focused on implementing the different instruments that I picked up learning over the years”, he says. This sentiment comes across in the innovative ways he incorporates the instruments throughout the album. While the tape kicks things off on a rather cautious note, the second half is really where he appears to get more comfortable and experimental, as he lets go of some of those tighter structures and mixes up the arrangements.

The beat tape opens with ‘The Stairs’, a twinkling, classic boom-bap number. It’s pretty standard instrumental hip-hop fare and doesn’t quite set the bar for what’s to follow. Thankfully though, it’s all up from here. The two tracks that follow are definitely the stand-outs of the first leg of this collection. Track 2, ‘Low Hop’ features languid guitar grooves swimming around cascading sheaths of melodies and keys.

The follow-up ‘Lush Lush’ sounds just like the name suggests; the acoustic guitar is the hero of the track, with gentle strumming and dreamy plucking forming the backbone of this rhythmic journey. The influence of producer/singer Tom Misch, whom the beatmaker considers one of his inspirations, is clear as day on the soulful grooves of ’Mountain Mist’ and ‘Grow Some Plants’.

As he began working on the album, the producer plunged into the world of old-school beats and began digging up some inspiration in sounds from the ‘80s. This textured feel which he was going for is present throughout much of the collection. Also woven into the tracks are organic flourishes and ambient staples in the lo-fi genre like ocean waves and twittering birds that keep things earthy and seamless across the board.

The album’s high point comes halfway down the tracklist with bright piano splices on the funky ‘Eventide’, which unexpectedly breaks into a propulsive number. On the foot-tapping ‘Take a Break’, he incorporates playful vocal samples before switching it up with the more solemn ‘Recovery’. Things pick up again with the guitar-led ‘Grow Some Plants’, which also features plenty of tremolos and skittering percussion.

Rohra throws us a curveball with the bubbling ‘Our Flying Squirrel’, while ‘Autumn Memory’ is minimalistic and possibly the most lo-fi hip-hop beats to chill to of the bunch. Album closer ‘A Love Bird’ wraps things up on a high note and reflects the overall feel of the project quite well. The producer throws a bongo into this buoyant, lo-fi track with the song’s glitchy and abrupt ending working as a sonic portal, zapping you out of this world and back into real life. A rude awakening? Maybe. But it just amplifies how serene and atmospheric the beats are.

Rohra recognizes that the game with beat tapes is to keep the audience engaged throughout. Still, a few tracks do sound a tad cookie-cutter compared to the others, so the tracklist itself could have used some editing. That said, Solitude’s 20ish minute runtime is more than enough as an effective sampler of Peach Blok’s production chops. He has also taken care to create a beat tape that is best enjoyed in a single sitting. So, much like the album art, find a quiet spot and just let the beats shape-shift and wash over you.