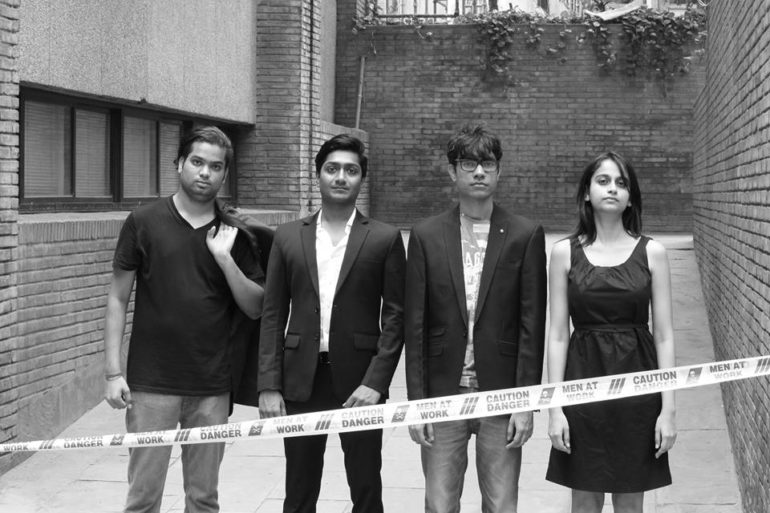 Religion by 4th Axis is ambition and experimentation at its finest

The produce section at supermarkets has more in common with how we evaluate music than you think. All it takes is a bite to peel back the veneer of faux freshness. Just when it seems like we have reached a creative impasse after decades of rock and roll, 4th Axis kindles the flame with their debut full-length album, Religion. The record features refreshingly bold experimentation, bordering on an almost avant-garde approach to nearly every lyrical theme and instrumental passage.

4th Axis is an art rock band from New Delhi, India. Formed in 2015, it comprises Bardar (guitars), Anupreet (vocals and keyboards) Sarthak (drums) and Ashwini (bass guitar). The band defines its music as a mix of dream pop and progressive rock, with philosophical themes for lyrics and continuous layers of harmony that have subtle shades of jazz. Their music is heavily influenced by progressive rock’s revered forefathers from the 70s and 80s as well as multiple experimental acts from the late 90s and early 2000s.

The plot twists and surprises hit us right from the get-go with the curious opener, ‘Mr. Bill Maher’. The track is (you guessed it) a “song for Mr. Bill Maher”, the famous comedian and Fox News anchor. The song is possibly the only prog rock nursery rhyme to ever grace our ears with its cute keyboard solos and choruses. Lyrically, however, the band’s attempt to tie it in with the overall themes of the record lands flat on its face. Although it sticks out like a sore thumb from the rest of the album, the track gets a pass due to its eccentric sense of humour.

Things get serious with the despair-heavy prog-metal track, ‘Freedom’. Anupreet’s sweet, yet powerful vocals confront our conformist society head on and pine for a sweet release. The track is textbook prog with the orchestral guitar solo layered over a melodic piano chord progression. The Doors swing open wide as we are treated to the beautiful and intimate keyboard intro in ‘Speak with me’. It has an interesting structure which echoes classical music pieces and movies from the golden age with a piano overture and an intermission. The latter consists of hypnotic vocal harmonies, which leads the listener into the upbeat and guitar heavy third act. The titular chorus bodes well over the mellow and bendy instrumentation.

Midway through the album, we stand in awe of the mammoth 12-minute-long ‘Entropy’. In true prog rock tradition, it encompasses elements of hard rock, jazz, a pinch of shoe-gaze, garnished with synth pop and served with a side of atmospheric and bass-heavy grooves. It is the most ambitious and daring track of the record. The track also has an interesting structure, with “chapters” about different moods and sub-themes. Each chapter is its own contained track with unique instrumental passages, which seamlessly blends into the next. The track also deals with deep philosophical themes about chaos the human condition with a deft and visceral hand.

The band throws out the ethereal and intimate sound out the window as we are treated to the arena rock riffs of ‘Northern Lights’. It features a glistening piano over thrash metal guitar riffs and a driving bass-drum duet. The track features minimal vocals with extended heavy metal instrumental passages in between. The track features ideas lifted off other genre favourites but blends these elements seamlessly with rich and tight production. The closer, ‘Conflict’ is much more intimate and personal with its lullaby-like quality. Like all the other tracks, this one is dominated by a minimalistic piano melody. However, it has a pleasant surprise when the tabla kicks in, followed by Anupreet’s beautiful Hindi vocals in the middle. The track’s bilingual nature and classical touch add many layers of nuance for a truly transcendental experience. Substituting drums for a tabla gives it a rustic aesthetic.

All in all, the record is one of the most daring and uncompromising projects in a while. The band paradoxically upends the status quo by incorporating elements and ideas from all of their clear influences, while still breathing new life into it. 4th Axis is not bound by any incessant desire to be accessible and commercial to the everyday audiophile. Music is served best when it is about nothing else apart from self-expression – an attribute which the band nails eloquently.