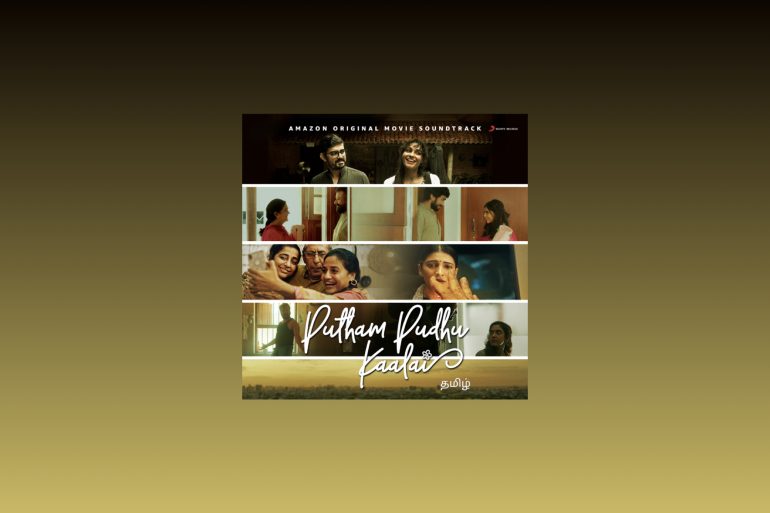 In Avarum Naanum/Avalum Naanum, Gautham Vasudev Menon’s short film from the recently released Tamil anthology Putham Pudhu Kaalai, a granddaughter spends the coronavirus induced lockdown in India with her estranged, maternal grandfather. They reconcile in a few days, but their personalities remain bifurcated and mutually exclusive yet respectful; a sinewy amalgam of modern pragmatism and old-world indubitability. The film’s soundtrack, composed by G.V. Prakash Kumar and Govind Vasantha captures that very essence.

‘Putham Pudhu Kaalai’ brims with hope, much like the recurring theme in the movie. G.V. Prakash Kumar, who’s also sung the song, has rendered it with all the euphoric exuberance he could possibly conjure, aiding his vocal and choral explorations with simple yet effective synth and bass chords. The keys play a crucial role in building towards the symphonic ambitions of the song’s core orchestration. The percussion gains strength as the song progresses and the song does succeed in filling you with credulous positivity, much like the younger characters from across the five films in the anthology.

Govind Vasantha’s solitary song in the album features in the aforementioned Gautam Vasudev Menon directorial, Avarum Naanum/Avalum Naanum. A quintessential Carnatic number, ‘Kanna Thoodhu Po Da’ is another expedition by the composer towards exploring darker scales, a trend uniform across his discography. The song is set in Raga Dharmavathi, an arena he’s previously explored, especially in the phenomenal ‘Seethakathi’. Sung by the legendary Bombay Jayashree, the song kicks off evocatively, with the veteran capturing the melancholy of the composition splendidly. The flute and kanjira also play perfect bolsters to the song’s root orchestration.

The rest of the songs composed by GV Prakash Kumar, mostly sound like reverential odes to the rich history of Tamil film music of yore. ‘Manmadhan Naan Dhana,’ sung by SPB Charan, for example, is reminiscent of the 1979 hit ‘Namma Ooru Singaari,’ sung by his father SP Balasubramaniam. The uncanny similarities in the vocal texture of the father and son render the soundtrack an unofficial yet timely tribute to SPB, who has a mind-boggling forty thousand odd songs to his credit, a record unlikely to ever be surpassed.

‘Kulfi Kuchchi’ a song structured around a tango based groove, is reminiscent of the grossly underrated ‘Masala Chaya’ from the Malayalam movie Thamaasha. The composer GVP is again on vocal duty, being joined by Bhavani Sre. The song is lax and affable, leaving behind a pleasant after taste post its brief runtime.

‘Kannam Adhil Vannam’ once again sounds like a tribute to another yesteryear Tamil hit. The song, heavily reminiscent of Ilaiyaraja’s cult ‘Mandram Vandha’ from Mouna Ragam, has GVP and Bhavani reuniting on vocals. Courtesy the incredible charm of the core melody and minimal orchestration, one ends up wishing the song would’ve lasted longer.

The fact that most of these songs appear through the films’ progressions is commendable, considering the runtime apprehensions the crew must have faced on the edit table. ‘Oho Endhan Baby,’ the pick of the album, is a quintessential song and dance number that serves that very purpose in a 20-minute short film. The protagonist grooves and blushes as fresh, pristine love enamour him while the beautifully corny lyrics and infectious tunes embrace him. An obvious tribute to its eponymous predecessor from the 1961 film ‘Then Nilavu,’ the song has a catchy synthwave groove accompanying the apt vocalisations of GVP, SPB Charan and Bhavani Sre.

GV Prakash Kumar and Govind Vasantha have proven their mettle already, not needing to submit completely to an anthology film that was never destined to release with much fanfare. However, the two have produced a soundtrack that they both can be mighty proud of. The songs and the movie are both available for streaming, but it’s the soundtrack that’s likelier to charm the audiences.