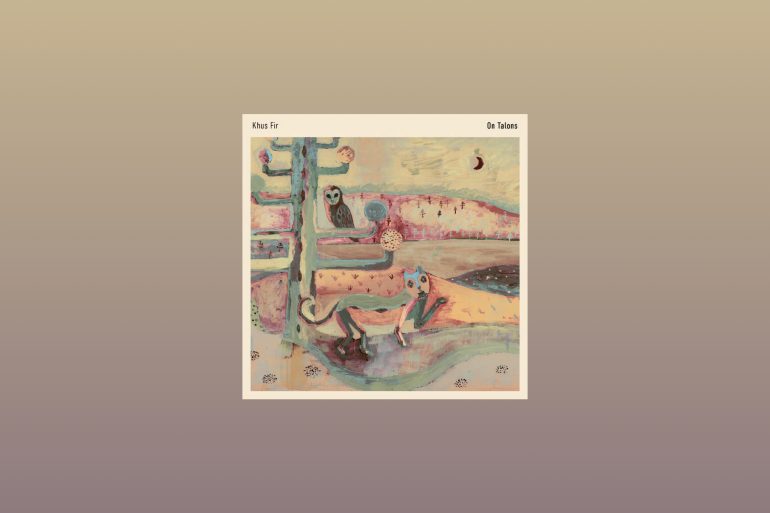 We’ve seen it before – producers and artists in general who don’t want to be clubbed into a certain sound or are just regularly reinventing their music, hopping on to new projects when they see fit. Bangalore-based artist Rishabh Iyer is not so much a drifter on the highway of sounds. He’s perhaps more closely likened to a sonic vagabond.

Previously releasing music as Worms’ Cottage (whose last release came in 2017’s To Each Their Own) and Chir Pine (also in 2017), Iyer is now creating moody new genre-hopping tunes as Khus Fir. His debut offering On Talons may take a few unexpectedly delightful turns in the beginning, but by the latter half of six tracks, there’s a clearer grasp that Iyer crafts surreal, journeying electronic music.

A visual artist as well, Iyer has things to communicate sonically and graphically with On Talons. The seemingly inverted colours of the night in the artwork feature an owl and what looks like a feline species.

The twinkly percussion of ‘Buriakhop’ acts as an enchanting bedrock for Iyer’s synth flourishes, leading listeners to that very Sikkimese town which serves as the song’s title. The producer pivots to more familiar clappers and dancefloor-friendly beat patterns on ‘Fading Memory’, digging his heels into an unshakeable house rhythm.

The next turn comes with the guitar, bass and vocal-anchored ‘Hollow,’ which also weaves in a slight swelling horn-like lead. He asks in an almost omnipotent, bass-heavy voice, “Do you see me clearly?” and “Do my words seem hollow?” as quickened guitar lines bubble in over rising synth, all communicating an ethereal trip that winds its way down after the 4:45 mark.

He brings back the familiar loop from ‘Fading Memory’ on to ‘Barn Owl Eyes’, this time stretching it out and taking turns with throwing in intricate as well as sprawling electronic experiments. The final movement is a guitar, which adds to the earthiness of it all.

A few blips and phases start off ‘Cat Claws’ abruptly, in which Iyer deftly pulls and warps a blob of synth and on ‘Spinning Compass’, there’s a dawning ambience as the producer-vocalist opines in a somewhat obfuscating manner, conveying more mood than actual words.

The artist seems to arrive at a sort of realization, as the sound of crashing waves see the record fade out. An ever-changing listen that can be suited to a live performance as well as the solitary headphone listening experience, On Talons is yet another testament to Iyer’s meticulous and intelligent sense of music making.