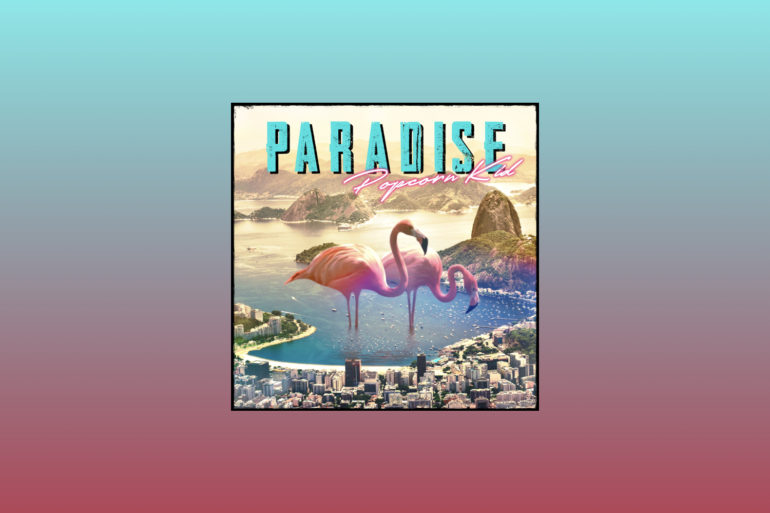 Popcorn Kid dreams of disco, synthwave and funk on ‘Paradise’

In the world of synthwave, retrowave and other wave suffixed subgenres, geographical boundaries don’t matter. That might be true of most music, but how else do you explain the sashaying 1980s sound of disco, funk and electronic music finding a home across the world, including India? It might usually evoke the visual aesthetics of beaches and palm trees, but India’s tropical climes and humid nights are not ill-fitting either.

23 years old producer, pianist and drummer Nikhil Narayan, aka Popcorn Kid, knows this all too well. Releasing music that delved into swivelling retrowave and synthwave since 2018, his third album Paradise incorporates heavier electronic elements that escape the synthwave tropes.

Composed and arranged by Narayan, Paradise also includes a major assist from his childhood friend and fellow Chennai-bred guitarist-producer Noxigen. The 10-track record opens to guitar shred skills by Noxigen on ‘Discotown’ and enters the glimmering night out soundtrack that’s ‘Freak Like Me’, with Noxigen’s vocals. The shiny staccato guitar lines are the best part, but there’s just a spot of cringe lyrics when Noxigen mouths off, “I feel these things, in my body/Oh baby let’s get naughty.” It might add to the pop appeal, but it’s not exactly inventive.

Popcorn Kid and Noxigen also collaborate with songwriter/vocalists such as Sarah Kneeland, Katherine Hb, Kay Taleas and Lyn Hesper across Paradise to add the much-needed diversity. Over a four-on-the-floor groovy beat, Kneeland, with her South American vocals, and Noxigen add a celebratory vibe on ‘Chance’.

Sprawling synth lines give away to some indefatigable sub-bass on ‘Flamingo Dance’ which almost runs the risk of using a similar template to ‘Chance’, save for a sharp-suited horn lead. ‘Pink Champagne’, however, offers a real high point, with its unshakeable synth bends and shimmering layers for Kay Taleas and Noxigen to belt out a hope-filled duet over.

From thereon, Paradise does well to transport you to different places; ‘Franklins In Stacks’ emits a strong Miami dancefloor vibe with its soul/funk energy, chorused vocals and strong saxophone mid-section. ‘Sunset Drive’ sees Popcorn Kid fully grow out of the synthwave bracket for a disco/house friendly shaker, Noxigen perhaps aiming for an Adam Levine-esque vocal croon. By this point, Popcorn Kid is ready to take over any club dancefloor, with a playful disco/funk weapon like ‘Unicorn Hair’ in his inventory.

But he’s wrapping up by now. Noxigen rips out another solo on ‘Skylines’ which is probably for anyone who didn’t get enough of that main synth melody on ‘Pink Champagne’. Los Angeles singer Lyn Hesper duets with Noxigen about escapist fantasies on ‘Together’, which lands at just the right blend of Popcorn Kid’s former sound and future sound. Paradise might just be a good sign that the young are growing up all right. The love for retrofuturism is intact and there’s nothing stopping them from exploring further.