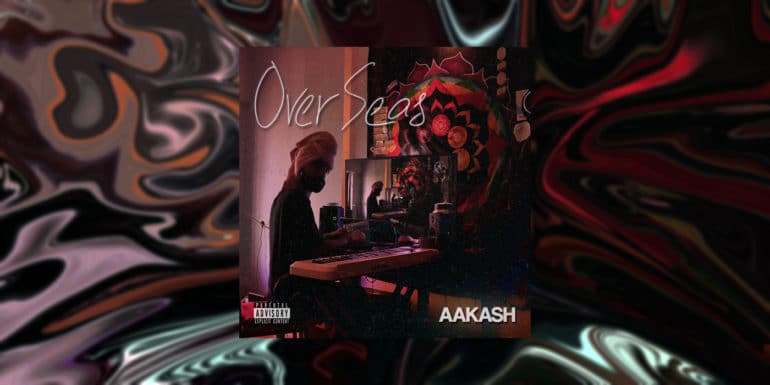 Over Seas by Aakash is a disingenuous misfire

One does not have to follow the charts to have an idea of what’s going on in the music world. Any mall or club that you walk in, any restaurant you dine at and any fun Instagram story will tell you what’s hip and what’s trending. We have entered a new era of escapism — one that is being increasingly split down the middle. There seem to be two very different schools of entertainment – the cerebral and the irreverent. Unfortunately, Over Seas fails to do justice to neither of these forms of escapism.

Aakash Ravikrishnan, aka AAKASH, is just one of the many producers who have been infatuated with the trend of music curation through collaboration. His goal to mirror DJ Khaled comes through in every aspect of his approach to production and features. He rode in on his breakthrough single, ‘Wazan Hai’ featuring MC Altaf and D’Evil showcased his knack for creating enjoyable albeit generic hip hop songs that cast massive nets over the hip hop scene.

However, his debut full-length album Over Seas is a shallow attempt at apeing the trap and emo rap hits in the west. The gargantuan 16-track album is firmly rooted in trap cliche’s, and half-hearted attempts at being trendy. Aakash’s production choices on almost all tracks feature shallow trap beats with booming bass and skipping hi-hats with a simple set of keys on loop. Each track features either a prominent or up and coming rapper in the nation and aims to provide a platform to elevate their skills as lyricists and MCs. Unfortunately, the lyrics and flow of these rappers do little to nothing in the way of adding anything of substance to the stale production.

Over Seas, in essence, is a party record – or atleast it hopes to be one. A bulk of the album features rappers lazily crooning about how much they like to party, drink alcohol and smoke marijuana. ‘Marley’ with Bombay Lokal features his lazy, phoned-in lyrics and flow which tries so hard to be a drinking song. Unfortunately, the tedious beats and braindead lyricism take anything enjoyable out of the activity. The following track, ‘Bounce’ with Dopeadelicz is a Tamil rap song which features possibly the worst chorus to be written in a long time: “Bounce, Bounce /Let’s make the crowd shake / Bounce, Bounce / Like it’s an earthquake”. The lyrical atrocities continue on the cannabis obsessed songs ‘Game Over’ and ‘Running Through Mumbai’. The latter features the cringe-worthy opener, “Ring around the rosies, pocket full of OG / Everbody know me, But I been feeling lonely”. The generic bassline and rattling hi-hats are reminiscent of the early days of Dr. Dre and Snoop Dogg. However, these are two artists who embraced cannabis culture and churned out tracks with forward-thinking and intricate production and witty lyricism.

It is at this point in the album that we get a peek behind the curtain of what’s actually going on. Over Seas is an album that appears to be designed by a committee after surveying tracks that seem to appeal to party-goers and the lowest common denominator without understanding the essence of what makes a track enjoyable and catchy. There is an abundance of party and drinking/drug-related songs that are enjoyable and loved by the general public out there. In contrast, most tracks on the album are a chore to get through as they offer little in the way of mildly enjoyable bars or beats. Over Seas is exactly what happened back in the 90s when hundreds of filmmakers made pale imitations of Tarantino’s Pulp Fiction without having the faintest clue of what made the movie so great. Over Seas‘ desperation to be a party mix makes it come off as an album with a mid-life crisis.

There are places where we see some of the features trying to reanimate dead production. We get a couple of aggressive gangsta rap cuts like ‘Darr’ with Dogz Music and ‘Kaala Jaadu’ with November. The features bring a lot of clever wordplays, flow changes, and internal rhymes to keep the tracks brimming with energy. We also get philosophical and introspective tracks like the opener ‘Khamkha’ with Sahir and ‘Khauf’ with Maharya. The former sticks out like a sore thumb from the rest of the album with its incorporation of strings and catchy melodies. The tracks reach some emotional peaks with their personal and intimate lyricism which seem to be a meditation on fame, relevance and even on party culture.

The final batch of tracks are admittedly enjoyable and well-crafted tracks. ‘Aadatein’ with Dee MC wth her melodious vocals and bilingual lyrics approaches cannabis party culture tastefully. The harmonies and dreamy production make it the most enjoyable track on the album. ‘Udh Chale’ disowns the aesthetic of the rest of the album with an indie pop/alt-rock inspired instrumental. Bonz N Robz and Sid J come through with engaging flows and tight, motivational wordplay.

In a nutshell, Over Seas is a well-intentioned album without focus or a direction. Playing the part of DJ Khaled, Aakash loses sight of making a cohesive and enjoyable album. With a few exceptions, the many features fail to bring anything new or exciting to the table. The beats seem to be replicated across most tracks with minor tweaks and changes. The album’s tiresome obsession with partying makes it fall flat on its face. Cutting out most of the fat of this mammoth album and presenting us with just the bare essentials would have done favours to a lot of people.