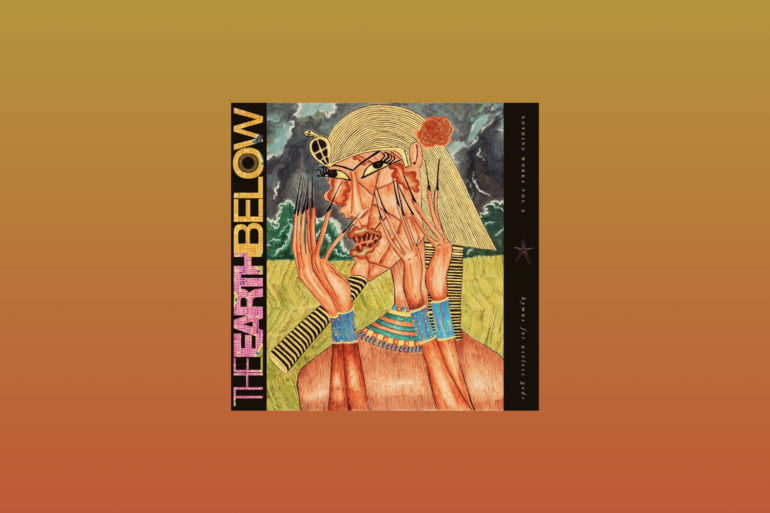 Nothing Works Vol. 2: Hymns for the Useless Gods by The Earth Below

First impressions can be funny! Stuck home during these chaotic moments, it is obvious to venture out into an endless maze of new releases. It is then that you might stumble upon an album like Nothing Works Vol. 2: Hymns for the Useless Gods. Everything that strikes you, even before giving the record a spin, feels off-kilter. The artwork features what looks like an Egyptian nightmare with multiple limbs and daggers for nails.

The tracklist includes names like ‘Rhythm of Pain’, which suggests an expectation of a dark and grim nature for the record. Speaking of first impressions; the artist is The Earth Below, who channels obvious references to hell and so on. The Earth Below is basically singer-songwriter and prolific drummer, Deepak Raghu.

Deepak’s reputation grew as the drummer of not one, but two pretty successful bands – Bevar Sea and Shepherd. His prolific output as a musician only served to sharpen and hone his skills as a songwriter. The heavy influence of industrial music on his debut EP Aleph morphed and changed over the decade. This found him exploring different genres and styles on the next couple of EPs that he dropped.

2020 saw the world being as pessimistic as ever about its future. That makes it an interesting era to see the release of The Earth Below’s first full-length album. The album features guest appearances by guitarist Ramanan Chandramouli of Blushing Satellite fame and bassist Leslie Charles from Thermal and a Quarter!

Nothing Works.. is a tough album to put your fingers on. Usually, writers are used to the collage of words that flutter through the mind’s eye as one tries to define every experience using language. However, the album eludes the very basis of a writer’s instinct. One could call it a “focussed” album after listening to tracks like ‘Brave Noise’ and ‘Abydos’. The dreary guitar lines, the stubborn bass lines and manic drums add to the doom and gloom of the sludge metal/stoner rock ethos of the record.

But then, the album presents cuts like ‘Come to Me’ which has charming bells and smooth guitar melody as an intro. The track could either be a confusing non-sequitur or a refreshing change in pace. It is dreamy and markedly less intense than the other ones on the record. Regardless of the pain-stricken vocals about romance, it makes you want to sway from side to side.

The low key cuts continue to hit you at odd moments in the album like in ‘Ceremony of Ash’ and ‘Strangers at Sea’. A thought could occur that maybe the album is about conflict or the bipolar nature of humans. A strong sense of optimism is found in the ‘Strangers at Sea’, where the lyrics seem to be about wanting a second chance.

But then you observe that for the most part, this album is drenched in pathos and pessimism. The opener, ‘Brave Noise’ has angular guitars and drums pounding with an erratic vocal performance. However, the songwriting is disappointing, with its very straightforward and barebones approach. This is in stark contrast to the very meaty instrumentation on the album.

However, it is not to say that there aren’t any highlights on the songwriting front. Take the track, ‘Crimson Gold’, for example, where the energy of grunge meets sludge metal. Various vivid images, like bodies drowning in rivers, are presented. The lyrics could be construed to be falling from grace, while the title alludes to the symbolism of gold being drenched in blood, implying the loss that encompasses every gain.

Sadly, this is the only moment of complexity and depth on the songwriting front. We get painfully shallow lyricism like on ‘Rhythm of Pain’. “I feel my way to the misty haze / A strange deadly graze fell upon her face/I know I’ve made mistakes,” the lyricist writes. The approach is straightforward indeed, but it is hard to draw listeners back for multiple listens.

Glimmers of optimism can be found in ‘Perpetual Prayer’, with its repeated “You’re not alone” refrain. However, the spoken word interludes on the track make its pace a bit choppy. Also, the production choices on most of the album are questionable, as the heavy compression buries the vocals in the mix at a lot of places.

It is true that the album is hard to pin down. It does seem gloomy and dreary now and then, but also manages to be charming and fun. It is at this point where you have an epiphany. The album could be perceived in two ways – an ode to confusion, chaos and conflict or just an incoherent collection of singles. As much as you can appreciate Deepak striving for the former, the album ends up being the latter.

That is not to say, it is without its acmes. ‘Ceremony of Ash’ and ‘Crimson Gold’ are solid tracks, along with Deepak’s drumming, which shines throughout the tracklisting. His efforts sure are valiant but misguided. The album tries to be too many things at once and fails at shining in any particular direction.