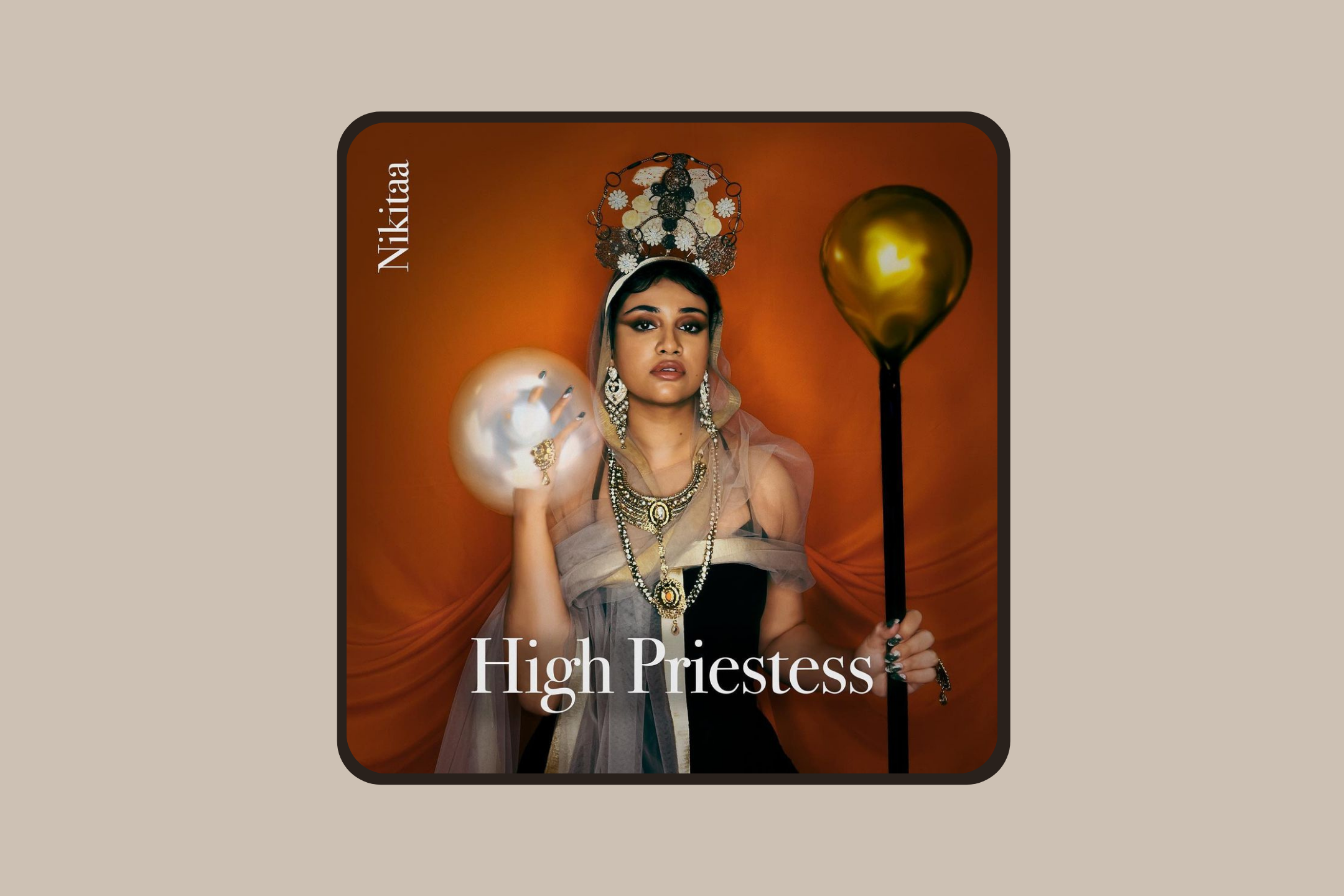 In a day and age wherein one-hit wonders and singles often rule out full-length album making, Nikitaa’s whopping 12-track record High Priestess is a standout. The 27-year-old who juggles her time between Mumbai and Los Angeles launched her solo career in 2018 and released 11 singles spanning genres and languages, before dipping into the making of the debut album.

It wouldn’t be much of an assumption to say that High Priestess underscores themes that feel informed by works from Beyoncé, with ‘inclusive, female-driven music’. Musically, the record boasts splashes of R&B and pop fused with hip-hop, birthing a unique albeit eventually forgettable show of force.

‘Clutch’, which was previously released as a single in 2020, serves as an appropriate appetizer when it smirks a controversial line, one that’s all too familiar to several women in this nation—“Besharam! Log kya kahenge?”. One of Nikitaa’s favourite songs off the album, ‘Clutch’ was written as a response to the sense of frustration she felt at being fetishized as a South Asian woman in LA at the time. Although the song is mostly feel-good and flirty, what makes it so powerful is that it talks about those parts of a woman’s sexuality and agency that don’t just revolve around satisfying a man, but also celebrates her individuality and authenticity.

While each track relays a unique, powerful message, the feisty, fighter undertones from ‘Clutch’ more or less bleed into the rest of the record. Both ‘Boomerang’ and ‘Farewell’ swoon lyrically about boundaries and the bittersweet feeling that comes with saying goodbyes, but the latter presents an unfamiliar sonic territory for the listener, bearing acoustic, pop-folk influences. ‘Farewell’ is composed in a major scale, which is in dashing contrast to the tension-heavy, minor scale dominated record. However, ‘DITK’ or Dancing in the Kitchen brings this flow back and shoves it right onto the dance floor. With pop-electronic synths, simple drums and Nikitaa’s pop vocal delivery taking over the chorus, it’s a no-nonsense, foot-tapping number.

‘Queen of Coins’ is built on the foundation of a lavish sitar lead, expressing abundance, manifesting riches using simple, solemn arrangements. The happiness notch is turned slightly up in the next song, ‘Goddess’, which platforms a tabla in the chorus and runs on a mid-tempo guitar lead, oozing pop genericness. With ‘Empress’, the album takes another bassy, impish turn, exuding an essence reminiscent of ‘Clutch’. It puts on an ethereal, shimmery background and flaunts sensuality. It’s at this point that the weight of the 12-tracked album starts to feel heavy, with most of the tracks reminding the listener of another one from the record. The personal significance of the songs and the lessons conveyed through them, however, don’t end here.

Nikitaa pays homage to Los Angeles on the track ‘City of Angels’. She goes on to scatter motivation on ‘Wolf’, encouraging her listeners to face their fears with valiance and balance. The track is fairly dry regarding production, except the bridge on which she gasps, “Kaun darta hai bhediye se?” (who’s scared of wolves?). The sparseness carries forward onto ‘Voodoo Man’, which falls just short of the kind of fullness you’d look for considering the song’s meant to talk about calling in a deserving romantic partner.

Another sonic shift is seen with the advent of ‘Bluebeard’, in which Nikitaa croons the French folktale by Charles Perrault. It talks about how curbing one’s curiosity isn’t always the ideal scenario; How, especially as a woman, asking too many questions isn’t too much of a bad thing and might actually be the right thing to do sometimes. About three minutes of ethereal vocals are layered in with samples of nature sounds, generating a meditative space. Surprisingly, the final track, ‘High Priestess’ was actually the first song that Nikitaa wrote for the album. It started with a simple horn section, around which the rest of the layers were built. She describes it as “Get out of your car, blast it on your speakers and dance in the street kind of music”

The album offers a range of interesting sounds and is well-thought-out in terms of production. High Priestess embodies growth, power and learning, while also holding an undeniable undertone of everything fun, flirty and emotional, which is formidable. What it falls short of in terms of sonic contemplation, it makes up in its empowering lyric and pointed storytelling, a definite one-of-a-kind in the pool.