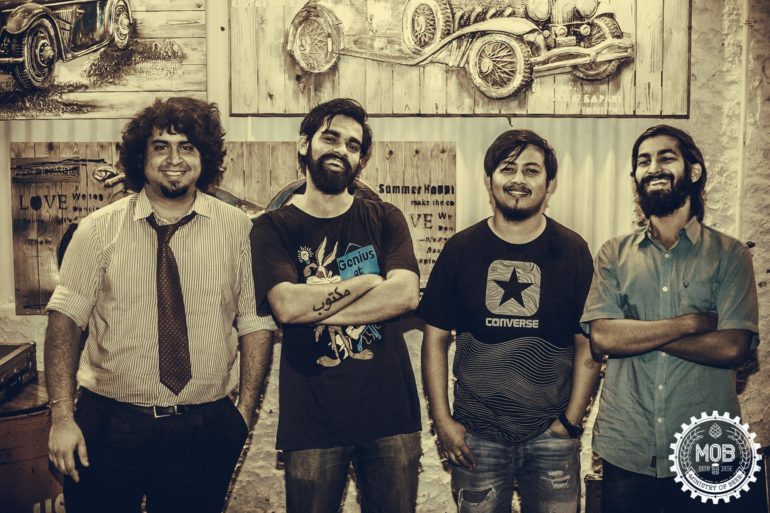 What does it take for a piece of music to move you? Like literally move you out of your couch and motivate you to get somewhere in life? Delhi based hard rock and pop-rock outfit, Moongphali has the idea down to a science. The quartet comprises Soham Mallick on vocals, Joel Lepcha on guitars, Salil Mehrotra on bass and Naman Datta on drums. Over the past three years, the band has consistently enthralled audiences all over the country with its catchy melodies and high-voltage live performances. It turned heads in their early days with acclaimed covers of famous hindi songs like ‘Dil Se’. The band’s signature blend of pop-rock, progressive rock and blues bleeds into every melody and riff that is crafted on debut album, Charchebaazi.

Moongphali approaches the album through the lens of maximum impact on every verse. The powerful riffs and soaring vocals of each track on the album suggest that the sound of this album was crafted through the perspective of a live performance. This approach leads to a set of seven crowd-pleasing bangers that pulls no punches. However, this energy and panache does come at the expense of a slightly generic and formulaic experience. The album tackles a wide array of themes from believing in yourself to social media addicts and the pitfalls of a romantic relationship.

Charchebaazi features heavy influence from blues-rock acts of the 60s and 70s with its slick basslines and infectious grooves. This is exploited to its fullest extent in the track ‘Behtareen’ which basically goes hand in hand with any movie montage featuring men in expensive tuxedos walking into a casino. The lyrics seem a bit incoherent and try to flesh out a spoiled rich brat who cannot care less about those around him. The band makes a curious choice by referencing seemingly random bits like Gandhi, Ashok and so on. The title track is another classic blues-rock anthem, with slightly moodier guitar tones. The band rebels against society which is quick to judge you for doing things like dating women or playing loud music. The band take their catchy social commentary one step further on the track ‘Tumse Na Ho Payi’. The track features equally catchy basslines and grooves and essentially exposes a social media addict who tries to put on a ‘cool’ facade.

The album is full of arena rock anthems like the energetic and optimistic ‘Jee Aao’. The track’s shimmering guitars and soulful vocals give it an upbeat, soulful and uplifting demeanour. The track is essentially a ‘pick-me-up’ which motivates you to live life to the fullest even if it means you need to take the road not taken. The energy only goes up from here on ‘Laparwah Yeh Dil’ with its prog inspired song structure and guitar solo at the end. The lyrics talk of a story of unrequited love and pining for your lover.

In a complete sonic and thematic contrast, the track ‘Pyaar Ek Dhoka Hai’ is a simpler and mostly acoustic track. The harmonicas and sparkling chorus give it a raw and rustic aesthetic. The song essentially berates the idea of love and how it’s the last thing you should do before contradicting itself in the last worse. The closer, ‘Laapata’ is a more intimate, low key and ambient track which reaches insane and poignant emotional heights towards the end with the orchestral choruses and dense instrumentation. The track portrays internal conflict and the path to peace effectively using the character’s state of deep sleep as a device.

Charchebaazi is a self-aware, no-nonsense, all killer no filler project. However, this could be seen as a fault in that the lyrics do appear to be superficial and trite with no discernable depth to any of them. Although highly entertaining, the riffs and melodies don’t see the band experimenting or taking too many risks. The album reaches straight down the middle of the road for the widest possible appeal with safe and crowd-pleasing bangers.