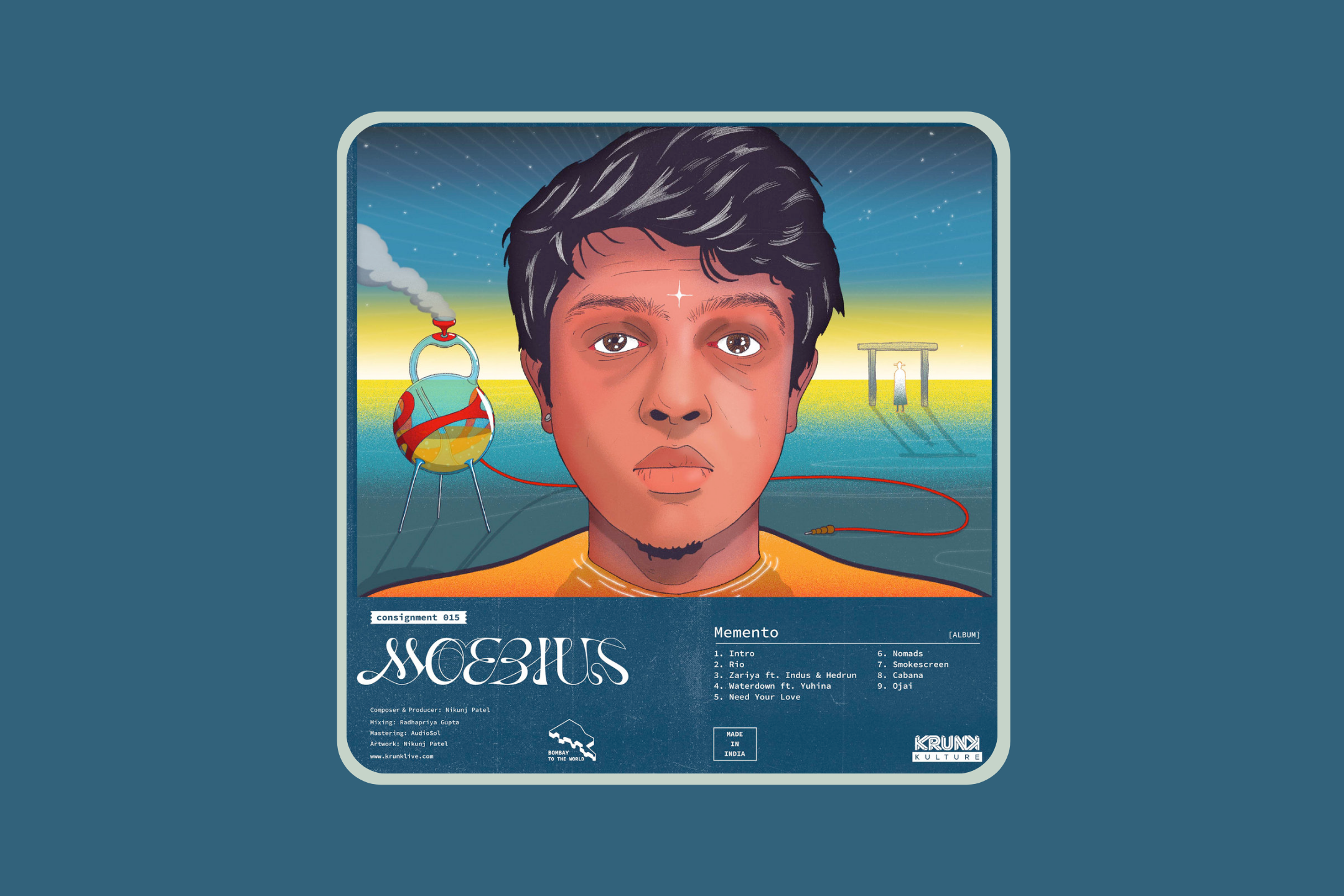 About a week ago, Nikunj Patel, aka Moebius, made his groovy debut on mainstream streaming platforms with Memento. The Mumbai-based producer has been a familiar name in music, primarily, by virtue of his striking animation and design skills, lending his talent to other musicians and bringing their work to life, visually.

The album explores the relationship between art and memory; the artist and their memories. Sonically, Memento features an assortment of electronic, house, and tropical house elements, with random samples of music that catch you off guard—from dream pop to Hindustani vocals, and more.

The name of the album is a word of Latin origin, refers to “an object kept as a reminder of a person or event.” Each track offers a glimpse into some specific memory, emotion or feeling, and together they make a whole—the artist’s keepsake; a memento.

While memory and emotion are cohesive threads that tie all of Memento together, the album seems disjointed. Memories exist in bits and pieces, vignettes that rarely appear as a whole. Our relationship with them, even more complex. So, at this point, it seems almost unlikely that an album playing with such delicate experiences could be unified.

In that vein, Memento features some stand-out tracks. ‘Rio’ is a Sunday brunch in the form of a song. ‘Zariya’, the first single from the album, featuring Indus and Hedrun, is a calming number that will have you swaying. Layered with a mesmerizing Hindustani vocal sample, and backed by intelligent production, it’s a track that proves to be as versatile as it is specific.

‘Waterdown’ featuring singer-songwriter, Yuhina, disrupts the album with its darker tone and mood. ‘Need Your Love’ and ‘Nomads’—the most cohesive tracks on the album—lift the spirits immediately with fast-paced rhythm and funky starts and stops; almost alternative in style.

‘Smokescreen’, unfortunately, gets lost in the mix. But, only before bringing with the most “rainbows and sunshine” track on Memento—‘Cabana’. It is is intricate, well-thought-out and sincere in its effort to have listeners grooving, but doing so, calmly.

‘Ojai’, the closing track on Memento, registers, perhaps, as the most emotional one, bringing to life the artist’s effort in dissecting memory and thought through music.

Memento is a thought experiment, in music. And while it’s a valiant experiment that toys with intriguing ideas, it ends with room for improvement. The missing pieces on this album don’t go unnoticed. But for Moebius, armed with sincerity and quality of thought, it wouldn’t be amiss to say that those pieces will eventually fall into place.