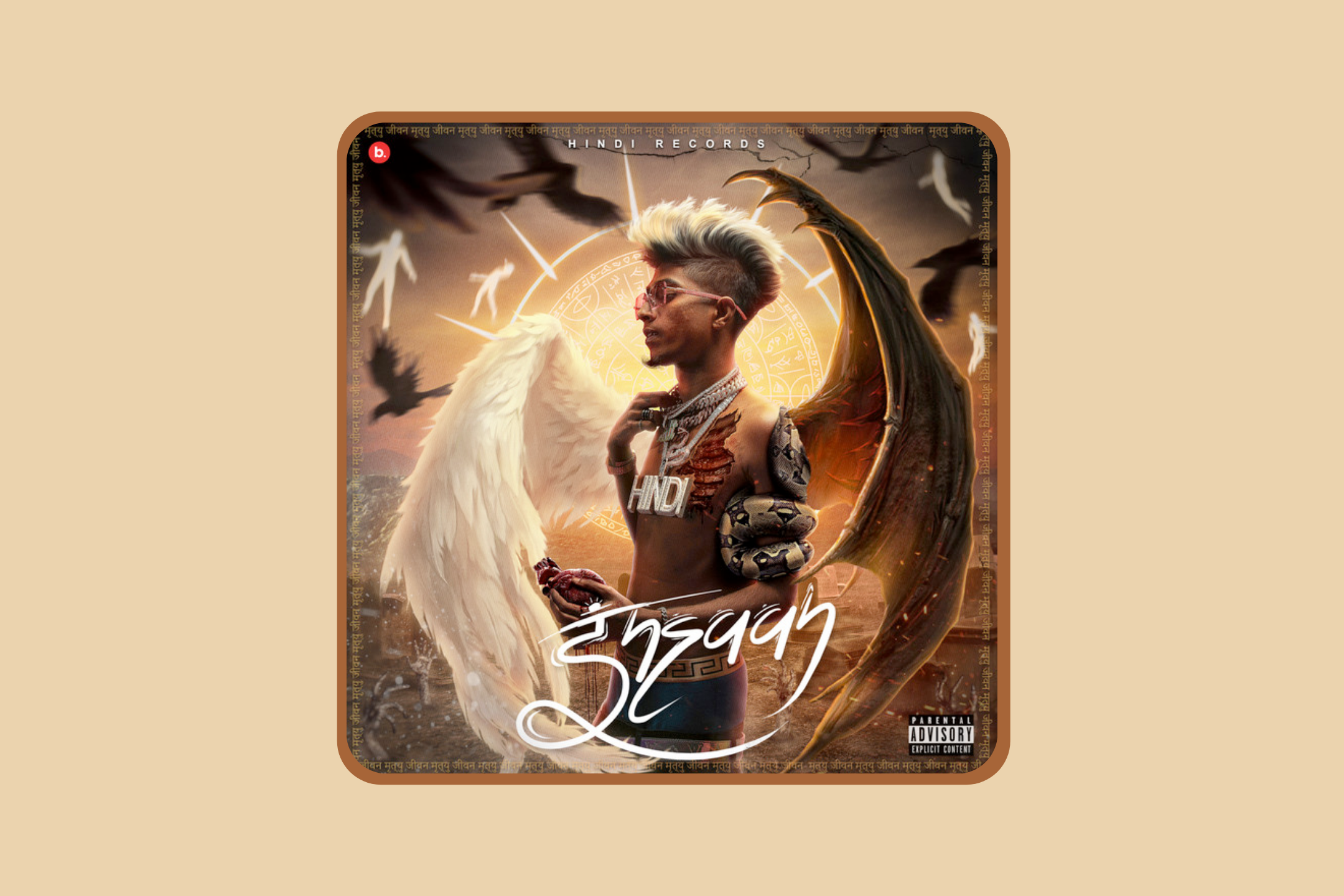 MC STAN is definitely an outlier. You’d think it’s an easy task to accomplish, considering the myopic stances taken by most within the Desi hip-hop spectrum. Altaf Shaikh began his climb upwards as the poster-child of the diss track, a concept that was still finding its feet and ironing itself out at the time. Not constricted by language either, MC STAN found himself at ease with either Marathi or Hindi with enough English inflections to cover all his bases. While other rappers of his ilk kept within their individual artistic boundaries, each MC STAN release sounded more unhinged, untethered.

These traits present themselves in spades on Insaan. Released via his in-house label Hindi Records and produced by MC STAN, the 11-track offering wastes no time in pushing us into the sonic deep end. Beginning with an oft-repeated sample of “Dekho, woh aa gaya”, the opener and title track begins with chaotic autotune, much like a cat walking over the controls, as the rapper gets philosophical on human nature and his pursuit of the worldly.

A little heavy-handed for a starting point, clearly the man has stuff to say. Tracks like ‘Gender’, ‘Fuckk Love’, ‘Regret’ nudge themselves into the emo realm. Sampled elementary piano or Spanish guitar blurb footnotes great lines like “Call mat kar bitch, leave me alone” and “Every bro is not your Bruhhh” (from ‘Kai Hai Mera Show’). ‘Basti Ki Hasti’ turns up the grime and aggression in a love letter to hustling in Pune (or P-Town), while ‘One Day Uh Gonna Pay’ is a tasty vow of revenge towards a double-crosser, a recurrent theme in this record. MC STAN seems to have been messed with a lot.

The album comes with a couple of features, namely Raftaar on ‘How To Hate’ and Ikka on ‘Maa Baap’. STAN and Raftaar’s trade-offs make for one of the better moments on the record, and STAN’s Marathi-laced verse is a stand-out. ‘Bitch’ is interesting enough on its own, but carries more complexity and baggage following recent abuse allegations laid against the rapper.

There is an air of fearlessness on this record that manifests itself in strange and perhaps unintended ways. While his 2020 release Tadipaar had songs that were lengthy and meandered, the pacing of this record is near-perfect. MC STAN does not waste a single second with bloated instrumentals or sprawling and unnecessary experimentation. The songs are jam-packed with humour and insight, even if both those things are occasionally juvenile, a little childish. But hey, way to give an audience what they want! At the time of writing this, the album had clocked a million plus streams within the first weekend of its release. The unfettered autotune still manages to burn a hole in my brain and play on loop, mostly against my will. And for all its baggage, ‘Bitch’ is a very competent song.

The beats across this album are top-tier, even when they are at their most bizarre and stuttered, and run toe-to-toe with STAN’s hobbling flow. Which is more than what can be said about the general instrumentation. The janky pianos and guitars, straight from a free loop pack, undermine the work done everywhere else. STAN’s rapping prowess is leagues above this, so it matters less, a lesser rapper would implode. It does falter in places, the rapper’s flow holding on for dear life as he trips over coffee table after coffee table. STAN’s tag, a high-pitched call of “Stanny, inki m** ch** daal”, shows up often enough to grate the senses. But it’s a tag, how else will I know that it’s him?

The last observation made it clear that it does not help to be pedantic. My understanding of hip-hop ticks certain boxes but clearly not all of them. While a lot of Desi hip-hop albums stay in lanes to minimize fallout, MC STAN has made an album that is firmly rooted in the present. My reaction to it softened from a “kids these days…” reaction to one of curiosity, if not immediate acceptance and devotion. It’s temperamental, hard to pin down.

The album closer, ‘Insaaniyat’, has a section where the only vocals are repeating the phrase “Suck my dick” over and over. Why this phrase is on a sombre(ish) track about humanity and human failings, is beyond me. This record made me feel many things, but most of all it made me realise: maybe I’m Danny Glover—too old for this shit.