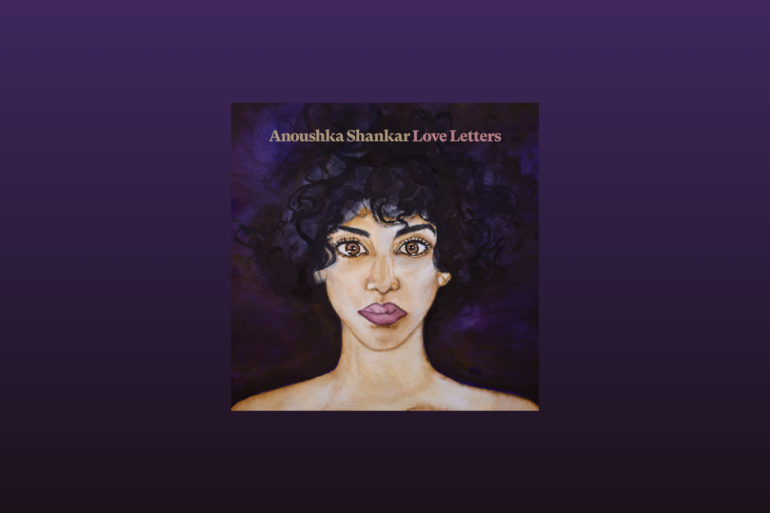 “There is great strength in vulnerability,” said Anoushka Shankar when speaking on her most personal album yet. Love Letters is, unashamedly and unabashedly, a heartbreak album. Built from domestic upheaval and resultant self-reflection, it exhibits a rare brand of fearlessness.

The opening sitar salvo of ‘Bright Eyes’ hails the coming of a new Anoushka, hurt but not bitter. Alev Lenz voices the pain of abandonment, “Does she feel younger than me/As you’re lying in your bed/Does she feel younger than me/Or is that in my head?” Shankar’s sitar glides through, steady, pensive and reflective of the emptiness that emerges from a deep, almost unspeakable loss.

The depth of this loss becomes emphatic in ‘Loveable’. While the music meanders along romantic flutters, the words (harmonised by Ibeyi) reveal a wounding of self-worth – “Am I still loveable, if you stop loving me?” Yet, there is no anger. The artist simply uses the song to look at herself and redefine her life outside what was once familiar but is now lost.

‘In Space’, however, Alev Lenz continues to explore grief, but by taking a stand. It starts with “There’s no space for me, there’s just space for you,” and ends with “Now there’s space for me, no more space for you.” The process of healing is long and arduous, but in this song, the listener recognises that it begins (and ends) with giving yourself permission to take up space. The lack of space is the lack of one’s identity, and all hope of putting oneself back together must involve taking the stand to show up as oneself.

‘Wallet’ is a song of haunting.  It is also a song of righteous anger. In this track, the scorned valkyrie lets loose, railing (without a graceful step out of place) at the injustice of absolving a man of everything as long as he pays his way out. She is left in the aftermath of emotional devastation, and all she can expect as recompense is the contents of his wallet.

Love Letters is the story of a woman, told by women. Shankar began her songwriting with female musicians who she confided in, and drew upon their perspective in motherhood, music and relationships. But it isn’t just the voices that are female. Shankar involved female engineers, thus creating an album that came from a safe space for women. Needless to say, female listeners will find their heartstring tugged in an entirely unique way.

Moreover, Shankar lets her virtuosity step into the shade. Instead of the sitar being a source of exotic wonder to the Western listeners, it becomes a harmoniser that binds together vocals and genre-crossing elements to accomplish the simple objective of expression.

While Shankar has certainly drawn upon personal experience to create her music – music becomes catharsis for her father’s passing in Traces of You – Love Letters comes from a deeper, more intimate place. To step into the light and let it divulge the self-doubt and unanswerable questions that plague a heartbroken human is an act of courage. Embodying this courage brings hope. The healing has already begun.