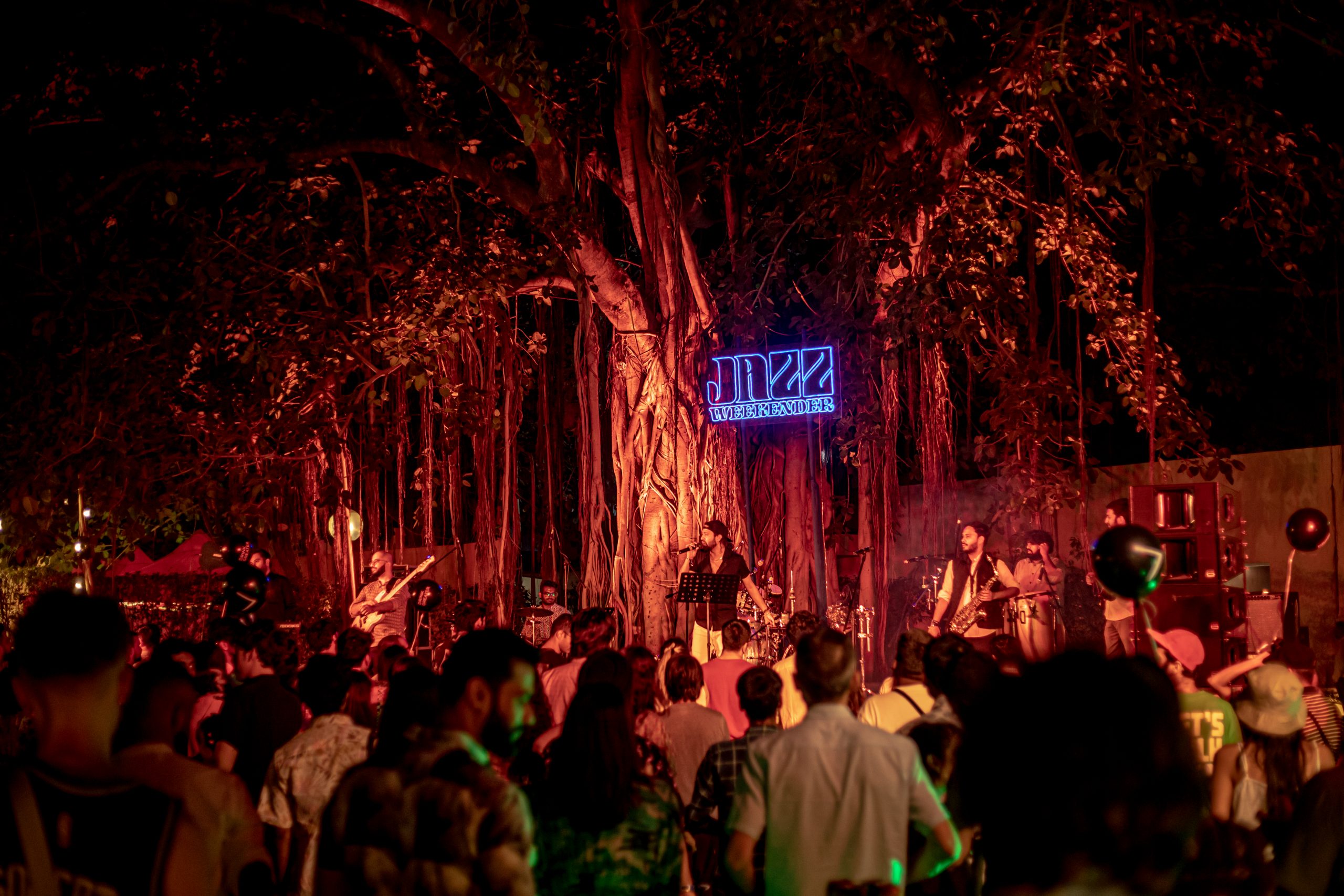 Evidently, people are craving social interaction, live music and other reasons to step outdoors. The lack of such experiences during the pandemic is a big reason why hundreds of people purchased tickets to a newly launched Jazz Festival, fought the heatwave in the country’s capital and actually showed up.

The Jazz Weekender is a new festival organised by The Wild City, Boxout.fm and Gatecrash. Nicely placed on the occasion of International Jazz Day and a long weekend, this is a three-day festival featuring Indian as well as international acts taking place at 1AQ, Mehrauli in New Delhi. We attended the first day of the event, and it was a refreshing experience.

The venue is a green and open space built around a huge banyan tree, the highlight of the space. 1AQ proved to be an ideal setting for the musicians of the jazz fest, as well as the small businesses and sponsors who put up stalls at the event. Talking about why they chose this venue, Munbir Chawla, founder of Wild City said, “We wanted something to represent the event that we aspire to be. 1AQ does that well. We wanted it to feel new and exciting, exhausted by relentless uninspiring DJ focused events/tours. We wanted to put back focus on live music and bring that open-air live music experience back to the city. Both the event and the venue provide an opportunity for its music community across genres to reconnect like this after a long time.”

Notably, there was space for proper security, something I truly miss at most gigs in Delhi, as well as a mobile washroom (on the wheels) that was clean. The standout thing for me, though, was the ample trash cans around the venue, which were being cleaned and replaced regularly throughout the night. Most festival organisers and goers end up with a dirty pile of beer bottles all around, but this place stayed clean until the very end.

The event has been in the works for the past couple of months and the high temperature is something that they had thought through. On their efforts to combat the heat, Munbir said, “The venue is located under a beautiful and big banyan tree that is surrounded by greenery. The day one weather was very pleasant. We have shading, cooler and mist fans and very cold drinks. By all accounts, it felt like a respite when you got there!”

These arrangements did make me forget about the heatwave for a while and allowed me, and everyone else around me, to focus on the music.

The first two acts – Raj, a producer whose music intersects between jazz and hip-hop, followed by Boi Akih, a duo of guitarist and composer Neils Brouwer and vocalist and lyricist Monika Akihary from the Netherlands were great in setting the vibe and getting people in the groove. The lush green lawn in front of the banyan tree was filled with people by the third act, the powerful instrumental duo of drummer Gino Banks and guitarist Rhythm Shaw. Their instrumental back and forth and unbeatable chemistry was more than enough to get people’s attention. Most of the songs they played were composed by Rhythm Shaw, including songs from his debut album Opening Act. By the time the Revisit Project took the stage, people were on their feet and grooving along to one of New Delhi’s favourite jazz/funk bands. Despite a hard cut-off set at 10 pm, the live music show ended late by half an hour. The band had to end their set, leaving the crowd wanting more.

This festival benefitted from the thoughtfulness and foresight brought in by each organiser, all of whom have put up successful events in the past—The Wild City runs the annual electronic music festival Magnetic Fields and piloted Magnetic Fields Nomads (their new limited capacity event) last year, Gatecrash has brought in some of the most interesting jazz acts from across the world over to India, and Boxout.fm is no stranger to music events. For them, Delhi is home turf and to find a venue like 1AQ, that just fits, is the perfect mix. “We feel that we bring a variety of different skill sets / experience to make an event like this a success—from marketing to production, design, programming and production. Wild City and Boxout always had synergy. It made sense that we do this together, and Gatecrash was the perfect curation partner for us,” said Munbir.

The lineup for the following two days looks promising too:

Tanish Thakker, Director at Gatecrash, said, “We are hoping that we can make this into a bi-annual festival, and do two editions – a winter edition and a summer edition. We would also like to do this across multiple cities.” If they can accomplish that, and take this to more cities over the next few years, this might just become the most exciting and aspirational festival in the Indian independent scene, where there is definitely space for more.