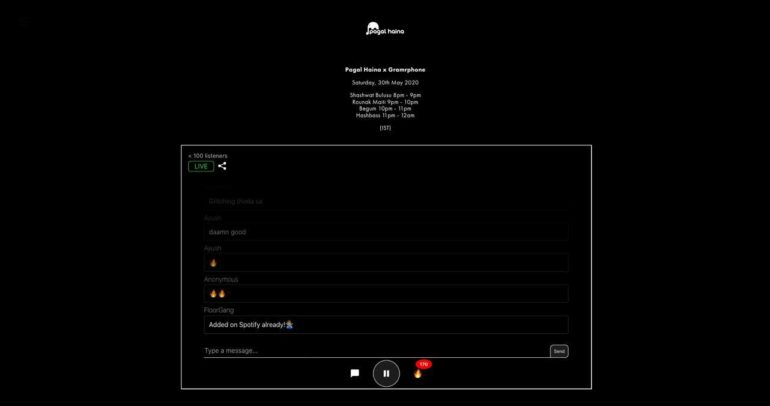 Indie label Pagal Haina, in collaboration with UK-based live streaming platform Gramrphone, threw a virtual concert last Saturday. It was a quasi-music festival with four hour-long sets and a lively audience kicking back to live music behind their laptop screens. A smattering of about hundred listeners had tuned in by the half-hour mark and stayed till the very end, which seemed a good enough crowd for an intimate gig. Because in a way, that’s what it was.

Folk-pop singer-songwriter Shashwat Bulusu opened the live stream at 8 PM sharp, belting out a mix of old and new material from his bedroom studio in Baroda. Bulusu in his element seemed to prefer this setup, of not having to see each other, “taking it back to how it was supposed to be.”

In between his bilingual songs, he talked a bit about himself, weaving stories behind some of the tracks. Classical touches dovetailed into harsher and ambient effects, brewing dreamy concoctions that complemented Bulusu’s raspy voice. A rich experimental sound defined his set, notable highlights of which included the live renditions of ‘Raani’, ‘Tiny Man’, ‘Finding Shalimar’, and ‘Holy Water’, ending with a radical interlude ‘Zindabad Ho’.

Listeners lingered in the virtual lounge, awaiting Pagal Haina veterans Rounak Maiti and Begum with bated breath. Sprucing up his mellow first act with arresting drum intros in the latter half of the set, Maiti swung to and from his earlier country songs (‘A House with a View,’ ‘My Diary’ and ‘Turn Inside’), and hits from his recent rock album Waiting on the Comedown.

He also surprised his listeners with some recent electronic experiments (on the unreleased ‘Outsiders’) that he got around to fine-tuning whilst in quarantine. It marks a self-assured departure from his usual style while retaining the lyrical grace he is well-known for, as the Bengali Cowboy croons on ‘Enlightened’, “The memory of my former self is a pixelated dream.”

This mood paved the way for a more playful variant of the same cynicism, as Delhi-based experimental rock band Begum brought their cheeky songs from live albums Bagh and W.A.E., along with new lo-fi ambient tracks. Dreamy psychedelic sounds wafted in through the airwaves as Karan Singh and Kartik S Pillai (also members of Peter Cat Recording Co.) hit the jazz tempo, bringing the big brass to their live studio, throwing back to the recording of their debut album.

The fans dug their claws into the set no sooner than Begum had hit the first note, on the wildly popular and eponymous “All My Friends Are Sluts and I Don’t Have Friends.” The set did take a discursive turn to discuss atheistic propaganda but it was also pliant enough to include the lullaby-esque ‘Sleepy’.

By the time beatmaker-producer Hashbass took over and spun the plates, fever pitch excitement was palpable in the chat section. Starting with ‘Pineapple’, the New Delhi-based artist played a woozy electronic set featuring some of his independent material.

The set ended only after multiple calls for an encore. A friend who had tuned in texted saying that these were the “lo-fi beats to study and work to.” Speaking for myself, I took turns letting it wash over me as if I’d put on a live record next to my work tab, switching back to read some of the comments and focus on some of the songs that stood out. Gramrphone presents the listeners the ability to engage and enjoy a live performance the way you want to.

Self-described as the easiest way for musicians to stream high-quality live audio directly to fans, Gramrphone lives up to this promise but little else. Occasional and remediable glitches aside, the lack of a visual element says that it may be some time before live music enthusiasts choose audiophilia over lisztomania. Audio-only streaming services stand to take a beating from Periscope and Twitch, both of which offer live video broadcasts.

From the artists’ perspective, the event on Saturday was a pretty good primer on what sort of audience interaction works in this type of performance space. One thing’s for sure that this quarantine is doing a good job of preparing us for a future where live streams become a permanent fixture of our weekends. It certainly won’t be anachronistic or inconsistent with the times. Perhaps the novelty will be infectious and we’ll get used to it. Or maybe it will be the silent disco of our generation. *Wince*