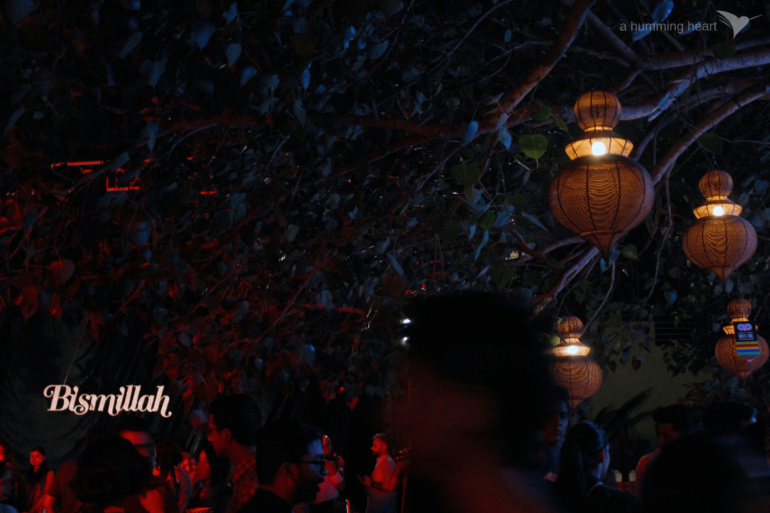 “We’re selling money; no really, we are actually selling some money at the merch desk, along with lyric books and T-shirts,” Peter Cat Recording Co. frontman Suryakant Sawhney drawled, as the Delhi-based ‘jajj’ quintet opened a three-city tour at Qla, to celebrate the success of their four-month-old third album Bismillah.

Only a few weeks back, he had told A Humming Heart how there’s nothing more satisfying than making a sale. For further context, fake banknotes fell with confetti on Sunday, October 6, as PCRC kicked the show off with ‘Where The Money Flows’, their hit single from earlier this year. Setting the tone for an electrifying performance, the band eventually got everyone to sway and shuffle their feet for the better part of the next couple hours.

Riding on the rave reviews and a packed rooftop in Delhi (tickets for which sold out in a matter of days), it is safe to assume that 2019 has indeed been the year of the cat. For a band that is morbidly obsessed with kicking the bucket, postmodern ennui, anxiety, desolation and self-destruction, PCRC is also all about love, romance, hard-ons, marriage and beach vacations – finding the bittersweet spots intersecting the two that often hide in plain sight. In the same way, they blur the lines between high and low brow art.

PCRC’s love for kitsch – as epitomised by pop culture, especially Bollywood – is well documented in their music, their interviews, promotional material and music videos. Sawhney’s wedding film doubles as the video for ‘Floated By’, a song almost everyone at Qla knew the lyrics to, nearly drowning out the singer-guitarist’s rum-soaked vocals.

The open-air setting and backdrop for the New Delhi edition could not have been more fitting – there were velveteen curtains, glittery thermocol plaques, booze, the Qutub and an autumnal half-moon affixed against a sky studded with a-dime-a-dozen aeroplanes.

As tunes from the five-piece maudlin jukebox filled the air, it soon became exceedingly clear how far Peter Cat Recording Co. had come in trademarking the sound they invented a decade ago. The band brought out all their big guns – harmonium, ghungroo, tambourine, flute, trumpet et al. – to recreate for a live audience what has been their most complete, characteristic and polished album till date.

The setlist was a generous mix of old classics and new songs. Besides all the tracks off Bismillah, the band threw classics like ‘Love Demons’, ‘Copulations’, ‘I’m Home’ and ‘Portrait of a Time’ into the mix, as well as some tracks from the grossly under-heard Sinema, Wall of Want and Climax. Some of these traditionally structured songs like ‘There Is No Love Here’ and ‘Namonia’ fit in perfectly with their recent, more experimental numbers – owing to a signature tinkering crucial detail in most.

Coming to the performance, the less said, the better. Seasoned live performers, our kurta-clad boys knew what they were doing – shuttling between instruments, sipping beer and apologising for going up a little late – sneering and sighing and dancing to their rhyme, gently cussing in the end as the audience demanded an encore.

By the time the band began belting out some of their more challenging and impressive compositions with quiet confidence and poise, an easy-going mood had set in. Sawhney entered Lifafa-mode for the electronic outro of ‘Love Demons’ (that got off to a rocky start but soon picked up momentum), sending the crowd into a frenzy. The horn section led by Rohit Gupta and Kartik Pillai was terrific throughout the show, filling the spaces where Sawhney’s lyrics demand it with swoony precision. The trumpets in ‘There Is No Love Here’ sent everyone, fishing out their recording devices.

Among the new tracks, the crowd seemed to enjoy ‘Remain in Me’, ‘I’m Home’ and ‘Memory Box’ the most, although the languid ‘I’m This’ and the cheeky ‘Heera’ also stood out for me. Also worth mentioning was the switch between ‘Shit I’m Dreaming’ and ‘Memory Box’, shortly after the laser beams came on.

The band also debuted a new track, called ‘We’re Getting Married’. It felt like an epilogue to the show and Bismillah – a toast capturing a private moment between the newlyweds, an aside to the matrimonial pageantry that readjusts focus on the point of it all – love. “(We’re) Starting a journey, on our own/Well, I found you oh/Amongst a billion paths,” Sawhney serenaded the crowd before melting away at half-past ten.

If not for the stellar musicianship, go for the feelers and a great atmosphere.  There were games, beverages and food arrangements before the gig. The stage, sound, and lighting were as good as it gets, with key strobes twinkling in pace with the swiftly changing pace of the songs. Lending a smoky touch was a masterstroke – the performance seemed to belong in a bygone era just as well as it fits in a future timeline. Overall operations were mostly smooth, pulling off a multi-instrumental set like PCRC’s without major hitches – although the band did complain of low light on stage in between songs, and feed from one of the trumpets was turned on/up mid-section, on one occasion at least.

Pagal Haina, Raw Live, White Owl, and the security personnel at Qla deserve a massive shout-out. The ticket prices were competitive yet affordable and frankly worth it. The unreleased song is embedded into the wristband, I was told at the ticketing counter.

It is a sweet, sweet feeling, watching Peter Cat Recording Co. live. Their songs are like quicksand, vats of lost time and romance that you willingly drown in, regardless of your age, music taste, sexuality, BAC levels or marital status. The band puts up the kind of show where you’d wish you ran into your favourite professor/part-time blues guitarist, the neo-Beatnik chap you exchanged Soundcloud playlists with or an old girlfriend with whom you caught a Lifafa show. Their waltzes will remind you of those that saved a dance for you. And long after the gig is over, you’ll be thinking about the peculiar ways in which Indians celebrate new beginnings and old remembrances – even at world’s end.

Peter Cat Recording Co. performs next in Bangalore on Sunday, October 13 and have a sold-out show lined up in Mumbai next weekend, October 18-19.