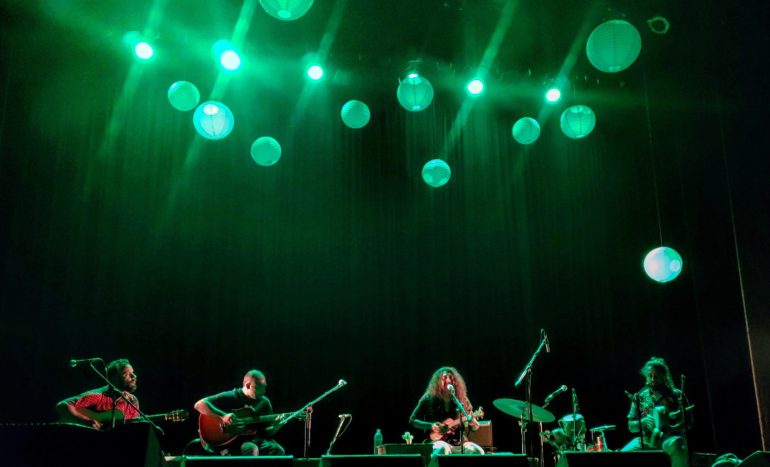 Keeping in line with the established custom of never starting on time, ‘Kinchit Sukhi Pakhider Shongbeg’ – a concert featuring two acts – Arko Mukhaerjee and the Borno Anonyo ensemble – started an hour later, taking into account the screening of a documentary on saving trees at Jessore Road. The venue was the auditorium of Academy of Fine Arts, Kolkata; usually reserved for theatre performances. But when a concert’s nature is akin to an audio play, it seemed quite fitting.

Now, at the beginning of the concert, the emcee announced loudly that this concert is political – a protest against rising fascism in the country, the current central government’s policies like NRC in Assam, extra-judicial killings, abrogation of Article 370 in Kashmir and the slow infiltration of divisive communal politics. And the concert did voice the pains of the voiceless, though in an intelligent and melodic manner.

The first act, Arko Mukhaerjee, played with a shortened lineup of his band with Koustav Dey on guitars and Sajib Sarkar on dhol, kortal, dubki and assorted Indian percussion instruments. Having formed this new line-up a few months back, Arko’s sound is has the meditatively monotonous quality of African music juxtaposed with Indian sentiments, making it feel truly global.

Declaring that he would talk more than sing, Arko touched upon sensitive issues like global inequality and the pain of migration. When he broke into a rendition of ‘Chol Mini Assam Jabo’, the ensuing applause nearly drowned out guest guitarist Arinjoy Sarkar, who was busy phrasing like Ali Farka Toure. From singing songs of Ireland to Mali and ‘bauls’ to Kabir, Arko was equal parts entertaining and enchanting.

Indeed, when the alternating blue and red light fell on his lion’s mane-like hair in the big, dark stage, the shouts of ‘joy guru’ from the audience seemed to make him almost saintlike. But he is merely human, with an extremely gifted voice which can traverse different pitches, diverse accents and a plethora of emotions which encouraged the crowd to join him wherever they knew the lyrics.

But this participation had its downfall too, with the claps drowning out the music at times and muddling the voice. However, the technical snags can be forgiven if the crowd has a blast. And they did. Satyaki Banerjee, Koustav, Nabamita Das and percussionist Dwaipayan Saha performed songs from their album Borno Anonyo – A Song Letter, which put into context the crises of the present with texts, poems and songs from the past.

When topics of poverty, impending water crisis, the call to arms and societal revolution are brandished in the faces of an emotionally charged crowd, it can only result in goosebumps and standing ovations at the end of the set.

With the help of Rabindranath Tagore and Mohiner Ghoraguli among others, and interesting soundscapes created by the oud, dotara, guitar and flute, the message was driven in hard that music can still move people. The surreal stage setting – sometimes orchestrated in a manner so that the artistes appeared to float in darkness – only added to the aura.

The percussion parts – designed as a companion and sometimes, a reaction to the rest of the sound – was frighteningly invigorating. The wooden brushes became a brown blur as Dwaipayan built up speed, only to find some strands flying off the oval hand drum and cymbal as he broke into fury rousing rhythms.

At that moment, it seemed that the fear gripping the nation today could be overturned. If people come together in strength like they did to watch a concert on a rainy day, then perhaps this concert would have done its job well.

Because in that moment, hope glowed much brighter than the suspended, spherical paper-lamp shades.