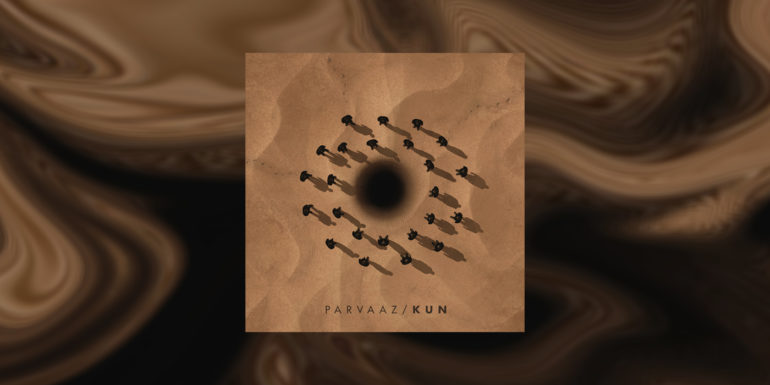 Since their formation in 2010, Parvaaz has worn their influences of progressive rock, psychedelic rock and blues rock very clearly on their sleeves and also weaving in plenty of local sounds into the mix, particularly those of Kashmiri and Sufi folk music.

Their explosive 2014 debut album, Baran showcased this to a great extent with catchy melodies which served to accent their deep and thought-provoking lyricism. This ethos was responsible for their biggest single, the upbeat and bluesy ‘Beparwah’. In the years since the release of Baran, their eclectic genre fusion and lyrical music earned critical acclaim and awards.

Their sophomore outing, Kun, has been two years in the making. The album’s title literally means “to exist” and comes as no surprise when one attempts to excavate the depths of the album. It boasts more ambitious production than their previous effort and incorporates many big talents such as Mumbai-based Sameer Rahat (from rock band Joshish), long-time producer and keyboardist Jason Zachariah, Akshay Dhabadkar and bassist, composer and producer Leslie Charles (from rock band Thermal and a Quarter) who add piano, string and orchestral flourishes throughout the album.

Beneath the orchestral, almost cinematic harmonies and immaculate vocals in every track lie a plethora of subtleties in both the instrumentals and the lyrics. The underlying themes and emotions of the album begin to materialise soon after the listener sits and attentively listens to the album and understands the lyrics, perhaps best with help of some translation.

After the title track leads us in with a spooky and atmospheric instrumental buildup, we are confronted with ‘Harf’. The feedback-laden intro gives way into a fast, passionate song with desperate vocals and glistening keys. The song has a unique structure akin to a stream of consciousness with no choruses. After hours of analysis and being able to merely scratch the surface of the lyrical themes, the song appears to be the dissection of a complex character who is being tested by various hurdles of life. The song is essentially an examination of the soul and about your ‘Harf’ or spirit being your guide. The use of tension and suspense throughout the album is worth noting, especially in tracks like ‘Shabaan’ with its larger than life and epic stature.  Perhaps the best example of this lies in the album’s most instrumentally and lyrically complex track, ‘Katyi Rov’. The slow and intimate intro builds up in complexity as more harmonies and instrumentals are added. The structure of the song is unconventional and challenging with a powerful and engaging guitar solo at the end.

Not all songs here are as dense and complex. The shortest track on the album, ‘Mushq-e Gul’ is minimalistic and mostly acoustic with some nice vocal harmonies. Lyrically, it seems to be an examination of the beauty of your soul and about devoting our soul to the pursuit and prayer of the bucolic aspects of life. ‘Soye Ja’ is another passionate song that reaches unprecedented emotional epochs. With the help of some floral imagery, the narrator talks about his struggles with losing hope and losing strength. He implores to not let your memories be a fleeting train of thoughts. He wishes these memories of a loved one don’t fade away. The song employs plenty of floral imagery.

A bulk of the album’s songs feature upbeat and energetic instrumentals, which are in complete contrast to their thematic subtext. For instance, ‘Zindaano”s epic and arena sized instrumentals accents a set of disjointed and almost Thom Yorke – esque incoherent lyrics. They talk about the feeling of being caged inside a body or being caged by the pressures of life. Kashif’s soul feels like a castaway boat in this universe without support or help, making him feel trapped and insignificant. The gravitas of the lyrics pulls the listener down with it hard with the fun instrumentals being the only life raft in these icy lyrical depths.

Thankfully, ‘Mastaan’ offers a temporary relief from these nihilistic ploddings with its bouncy beats and campfire acoustic progressions. The powerful vocals wail about the world drowning in apathy. The world is caged in its own counterfeit facade while the narrator wants to break free from this phony world and keep flying by claiming the sky to be his home: away from the desaturated and grim world. He envisions himself to be outside the system and gives us a bird’s eye view of the way he sees the world. The closer, ‘Dasht – Be – Dasht’ and its radio edit feels like two songs rolled into one. The first half has upbeat and urgent beats that are very prog-rock inspired, contrasted with the mellower second half comprising of a lot of layered vocals and some ambient synths. The vague lyrics talk about the fact that the story behind every one of his scars is out there. The track reads as him fighting his own soul with each attempt being fruitless. He questions the moral fabric of society and how people seem to reject people with different or anti-conformist ideals. “I would rather die than blindly believe in what you do”, he proclaims boldly.

Clearly the album’s greatest strength lies in its lyrics. With Kun, the band finds a way to shove a camera into the depths of our souls to expose the cinematic complexities that permeate each and every one of us. The interplay of harmonies, instrumental progressions and the powerful vocals throughout the run time is a testament to the passion and commitment that clearly went into crafting every single song. The production does take a slight back seat as it tries to put the vocals in the spotlight, with the instrumentals acting as accompaniments without having any personality of their own. Kun wouldn’t exist without its vocals and thematic complexity. With this latest effort, the band proves that Baran wasn’t a fluke. Once again, Parvaaz gives us an album with the ductility of a spider’s web which definitely will not wear thin with multiple spins.