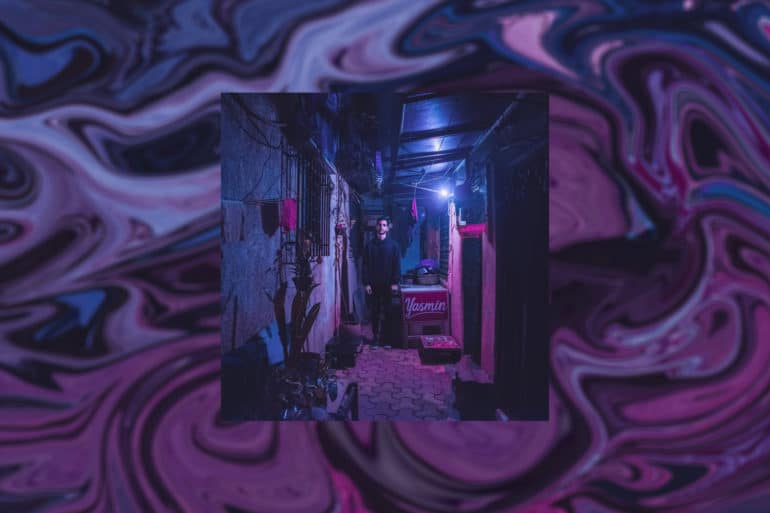 Kumail Hamid is a music producer and DJ from Mumbai, prominent for his atmospheric electronic tunes. Having started his career diving deep into lo-fi ambient electronica, Kumail is what GenX would call, a “mood”. His music gleans heavily from lo-fi, hip-hop, and jazz owing to forces like Knxwledge, King Krule, and Shigeto. More relevant artists on his playlists include Obongjayar, Channel Tres, Mndsgn, JPEGMAFIA, Tony Allen and “always some D’Angelo”.

Kumail has co-founded Knowmad Records, an independent record label, in 2016 with partner Aazin Printer. He released the impressionable Links in 2016 and the trenchant From You To Blue in 2017. The latter release saw him tackle the dark, murky waters of a relationship gone awry in a crisp 21-minute record.

His atmospheric creations possess a melancholic incisiveness that can cut through metal. Notwithstanding his aesthetic, Kumail has never felt hamstrung by labels. “I just make what naturally comes to me and my aesthetic follows”, he adds. His latest release, Yasmin, sees Kumail embody a new sound. Having employed textural ambient lo-fi for years, Kumail went “searching for a new sound more in-tune with his older, more mature, and more thoughtful self.”

Having teased his new sound on his Weekender set from last December, Kumail has had fans hyped for his upcoming full length since. Released by Brooklyn-based label Bastard Jazz Recordings, the nine tracks featured on Yasmin are an eclectic bunch, to say the least. With the runtime cutting in at 22 minutes, Kumail crafts shorter, slower hook-jams (all but one shy of the three-minute mark). For instance, the production on second track ‘Kkwy’ is in classic Kumail fashion with a twist. Clean, pristine, and deliberate yet strapped with blithe piano synths. Heavily drawing from more R&B and soul roots, the album is also embellished with the zest of a gamut of influences across space and time. From Japanese funk to 80’s disco to LA beat music and the omnipresence of Dilla.

Yasmin features more vocals than all of Kumail’s past records combined. It’s his most accessible body of work yet. The vocals open up the album, allowing Kumail to interest a slightly wider audience. Yasmin was never meant to feature Kumail’s singing. “I think playing with a band has really had an impact on this release. You hear more of my voice, more music and more of me.” He has also worked with a number of vocalists on the record. On ‘Same Shit’, the lead single off Yasmin, L.A. rapper Pink Siifu and Kumail spit out a cutting L.A. beat inspired riff-raff. The cross-country collaboration makes for an abrasive yet welcome break in the album’s course.

‘Obota’ is easily the ear-hook of the album. The track features a compelling sample from Pierre Akendengue’s ‘Olatano, w’intye so du s’ Afrika’, vocals from singer-songwriter Azamaan Hoyvoy, and a sick soul-inspired flute beat. On ‘Ease Up’, Kumail paired up with fellow Mumbai producer Sid Vashi on what could be called the love-child of Kumail’s new R&B sound on Yasmin and backing vocal loop befitting of Azuma Kazuma. “It’s pretty collaborative. I’ve worked with a couple of musicians on the album so there’s a lot of live instrumentation going on that I haven’t explored before.”

The creative process for Yasmin was not all fun and games. “I was almost defeated before I started work on Yasmin. I had an entire album that I decided to trash because I wasn’t happy with it. It was a weird time. I couldn’t sleep, so I’d stay up and make beats which eventually turned into songs over time”, tells Kumail. “I invited a couple of musicians to contribute to the album and there’s been a lot of back and forth since, a lot of versions and a lot of patience.” Perhaps the eponymous ‘3AM’ is a reflection of Kumail’s midnight meditations on insomnia, anxiety, and the call for inner peace. Many a night, cooped up in a room in Bombay, has been invested in this project. It is equally a labour of patience as it is a labour of love.