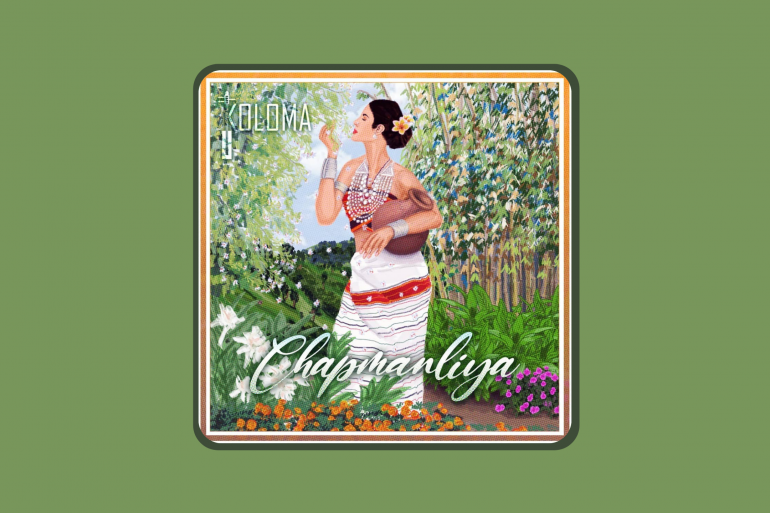 On their latest EP Chapmanliya, Tripura-based Koloma, comprising friends Rumio Debbarma on vocals, Bhaskar J. Debbarma on lead guitar and Shimul Debbarma on drums, transports listeners to the misty skies and plunging valleys of their home state. Driven by the desire to preserve the Kokborok language, which is increasingly in danger of vanishing as well present Tripuri folk music in a contemporary form, Koloma blends traditional folk instruments with breezy, hummable melodies, departing from their previous forays into rock and reggae.

The national lockdown earlier this year presented the band with an opportunity. Finally being able to carve out time to sit down together in a room, they began working on the EP using a basic home studio setup, before going on to finish the record at Hill Folk Studio after restrictions eased in the state’s capital city of Agartala. The EP’s five songs, sung in the band’s native language, explore the topic of love and its many facets including homesickness, long-distance relationships, and the giddy excitement of falling in love.

Describing their music as ‘folk fusion’, Koloma creates a sound that is truly global with the EP’s opening track ‘Naira Naira’. Upon first listen, it hits you like a cool breeze. The feel-good tune contains shades of country music, Afropop-rock, and sounds from the South Pacific islands, with shimmery guitars, vocal harmonies, and rhythmically sung melodies. Vocalist Rumio sings about the period of waiting to find a special someone with an innocence that is sure to turn any hard-nosed listener’s frown into a smile.

The folksy, nursery rhyme-like ‘Khatiuwi’ explores the all-too-familiar feeling of unrequited love. Rumio’s playful vocal delivery of the track’s tongue twister lyrics would not be out of place in a classic children’s film. Together, the acoustic guitar tuned percussion, and plucking of the Chong Preng – a three-stringed instrument from Tripura – conjure the childlike joy of splashing through mud puddles.

The EP’s title track, which translates to a ‘state of confusion’, is the most rock-influenced of the lot. The pulsating beat, carried by Shimul, along with twinkling guitars and subtle electronic elements – a sound reminiscent of early Coldplay – captures the feeling of watching the sunset and basking in the hope of a better day. An immediate calmness washes over the listener with Rumio’s vocals vibrating like a violin and Bhaskar’s playing mimicking the carefree sound of Hawaiian steel guitars.

Shifting gears, ‘Teisi Uphilwi’ ushers in a darker sound with its bare-bones instrumentation, comprising little more than the acoustic guitar and percussion. Rumio sings about the art of flirtation with a mischievous glint in his voice, while the rolling percussion provided by Shimul add to the song’s rustic feel. Listening to it, one could imagine a ragtag group of cowboys settling down in front of a bonfire to warm themselves up before resuming their journey into the night.

Closing the EP, ‘Khunai Kwrwi’ returns to the ethereal atmosphere of the earlier tracks. The song touches upon the experience of living miles away from home and the difficulties of remaining connected to one’s roots. A bobbing bassline from a friend of the band Binoy Debbarma keeps the song tightly held together. Meanwhile, traces of classical Indian music, from the shaking of the ghungroo to the use of the mallet, decorate the floating melody.

Waving the flag for Tripura and hoping to put the state’s rich musical tradition on the indie music map in the way other contemporary folk artists have done for their respective languages and hometowns (the band counts Papon and The East India Company among their musical influences), Koloma delivers a solid effort with Chapmanliya. As strong as the EP’s tracks are collectively, however, it is the opener ‘Naira Naira’ that makes the most memorable impression.

The EP’s exploration of love melds perfectly with the sensitivity displayed towards preserving the rich musical legacy of Tripuri culture, and there is an inexplicable sweetness to the songs. It would have been interesting to see the band be a little more daring with the production, for instance, by merging traditional instruments such as the Wakhrop (bamboo flute) and Sarinda (fiddle) with electronic textures or experimenting with recording techniques. Perhaps we will have to wait and see what they have up their sleeves. For now, Koloma can stand proud knowing that their language will not be forgotten so easily.