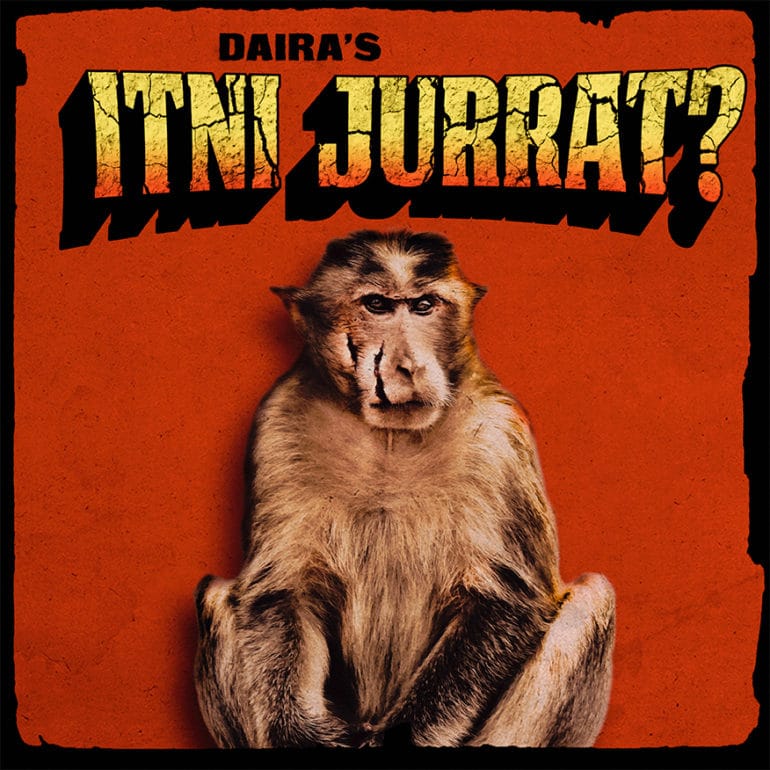 Itni Jurrat is a dark and wild chapter in Dairas discography

The energetic string shredding outfit, Daira is back with their third and darkest album yet, Itni Jurrat?. The avant-garde art rock outfit hails from Mumbai and consists of a core quartet which includes the lead vocalist, lyricist and multi-instrumentalist, Piyush Kapoor, guitarists Vikalp Sharma and Shivam Pant and Pratik Kulgod on the drums. The album that was mixed, mastered and co-produced by the famous Serbian producer/engineer Vojislav Aralica, is a nihilistic and self-destructive meditation on the human condition from start to finish filled with wild, unpredictable instrumentation which is only accentuated by Piyush’s raspy growls.

We are air-dropped into the total banger ‘Bhookamp’, a track featuring passionate vocals about Orwellian themes of the nature of truth that are layered over a groovy bass over unrelenting percussion which follows the lead guitar to powerful effect. The drumming throughout the record stands out consistently due to its powerful presence and unwavering creativity. The track is marked by the steady rise in intensity and tempo, as it finishes off with a very passionate guitar solo. There is a sudden shift in tone with ‘Mahaul’, as it starts off with a plucky bassline and a curious blend of prog rock, funk and an overall salsa vibe. The track also features energetic drums and a catchy chorus which lead to an ethereal and grandiose finale marked by electronic blemishes over a hypnotic bass. Lyrically, the song deals with self-loathing and isolation, almost to the point of being self-destructive.

The theme of self-loathing is revisited multiple times; most notably in ‘Lailaaj’. The track is one of the more lacklustre cuts on the album. The weird warbles at the beginning and the generic guitar riffs lend to a forgettable listen. However, the raspy and intense vocals about personal identity are the light at the end of a dark tunnel. The weird and creepy warbly guitars are a recurring idea throughout the album, like on the track ‘Ailaan’. This artsy mammoth nine-minute cut is mostly a slow burner. The track ends with a politically charged and slightly cartoony speech which doesn’t really land as well as the band might have intended and definitely sticks out like a sore thumb in the context of the rest of the album.

Thankfully, the lacklustre moments are scant. The band is at its best when it sticks to its powerful and animalistic guns. The track ‘Mazedaar’ is a notable example with its electrifying chorus, layered over an effective set of instrumentation. It might sound like an everyday pick-me-up party song but features lyrics that endorse living wild and chaotic lives and calls out those who are too overcome with greed to live in the present. The track ‘Raat ka Kinaara’ is the high point of the album. An arena rock song with powerful vocals set on top of a soulful and plucky bassline, it features an unpredictable instrumental passage which bounces between bass and guitar, with a jazzy intermission. ‘Mazedaar’ finally explodes into this incredibly vibrant and awe-inspiring chorus and is one of those tracks that can quickly put entire stadiums in a trance as you relinquish all control and are swept away for an interstellar odyssey.

Jazzy instrumental licks with plucky basslines are aplenty throughout the record in tracks like ‘Sahaafi’, which is an intense banger with a groovy instrumental interlude featuring eerie synths in the background, eventually leading into a wild finale. Like the rest of the record, the track is dark, nihilistic and is a meditation on the transient nature of existence. ‘Poshaaq’ is the most intriguing cut on the album. Although the instrumentation is passable at best, we witness an exciting staccato, fast-paced chord progression with the intensity building up continuously and finally exploding into a very entertaining and soulful guitar solo. The album then ends on a high note, the trumpets being a nice touch.

Overall, the album spares no expense at being a dark and pessimistic outlook on the human condition. Daira justifies its reputation of being a wild and energetic band with a very respectable boldness and drive to experiment. The outlandish experimentation does come back to haunt it, especially in the second half of the record where some of the risks don’t really land as well, and it is clear that the band is at its best when it sticks to its uncompromising guns. The record, on the whole, is bold and energetic, the raspy and pain struck lead vocals and powerful percussion being the most notable stand-outs.