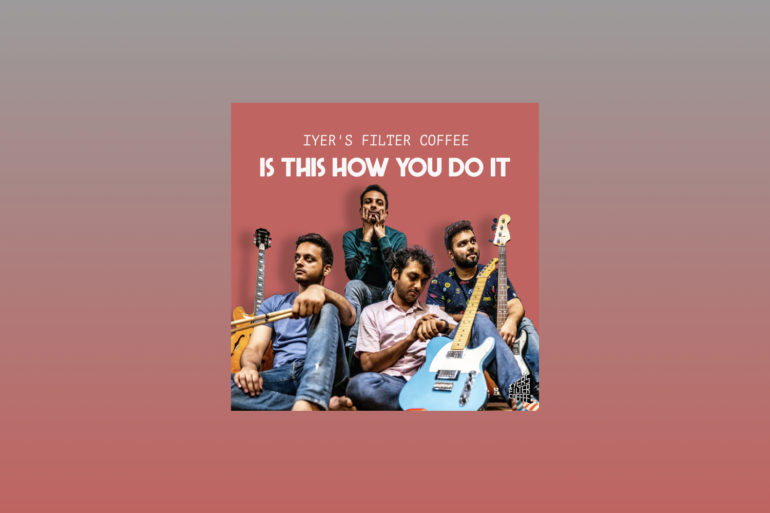 Let’s cut to the chase – this album is awe-inspiring. But not quite why you think it is. Yes, it is a stellar album and we’ll get to that. But first, let’s rewind back to a year ago, to early 2019. Rushil Mishra (guitar and vocals), Pushkar Ravindra (guitar and vocals), Dennis Dey (bass and vocals) and Sachin Iyer (drums) came together to form what we now know as the Bangalore based indie rock band, Iyer’s Filter Coffee.

Inspired by other bands that typically influence independent rock bands like RHCP and the Strokes, Iyer’s Filter Coffee put out their debut EP, coldturkey. Reception of the EP (particularly by yours truly) was lukewarm at best, owing to the lazy songwriting, lack of original ideas, rushed production and a general lack of identity. It was quickly relegated to the indie backburner and the conversation shifted elsewhere.

However, it would appear that Iyer’s Filter Coffee spent the next year quietly brewing a storm. Their debut full-length project, Is This How You Do It, is perhaps one of the most drastic leaps in artistic achievement in recent memory. There are eight tracks, filled to the brim with jaw-dropping performances all around, lovely melodies, a guitar solo in every single track and presented with stellar mixing and production work.

To be clear, the band is not reinventing the wheel at all. Their artistic influences are clear as day. However, they manage to internalise their rock fantasies and forge a unique musical identity for themselves. The whole thing kicks off with the amazing opener ‘Weather Update’. The intro is heavy, yet melodic over a dynamic beat. The song is heavily grunge-inspired but has an infectious energy and sets the tone for the rest of the album perfectly. The confessional, straightforward lyrics need to be mentioned like “It’s 9 o clock/I am better off drinking alone watching Game of Thrones”.

A major issue on coldturkey was the annoying repetition of verses, which came off as lazy. ‘Newnew’ does just that but it is done in an interesting way. The first verse seems to be about a lonely protagonist sick of the status quo. The second verse repeats the lyrics in the first verse but appends it with a bit more context. This extra content creates a shifting narrative of him wanting to get away from his loneliness through another person. The level of complexity and forethought that went into the lyrics is a vast improvement from the previous work. The song also features an amazingly melodic solo at the end.

The band turns up the cheese in the awkward and charming ‘Evasive Maneuvers’, which is a cheesy love song in all the right ways. The melody is catchy and carries the song and allows the desperation-soaked vocals to shine through. Rushil makes an awkward attempt at rapping but the intentionally fiddly lyrics are charming. However, the song features a great chorus and a Random Access Memories-esque funk rhythm section. The intro of ‘Lazy Day’ sounds almost just like the intro of ‘Welcome Home (Sanitarium)’ by Metallica. The songwriting on the track is tepid, at best.

The band reels it in towards the final leg of the album. ‘Deytime’, the penultimate track is very interesting from a songwriting and production standpoint. The guitars are intimate and all mostly have clean tones. Lyrically, it appears to be a self-healing song with the protagonist telling himself that he’s “feeling alright”. ‘Noize’ is a heavy, distorted ode to 80s hair metal and ‘Nitetime’ is a melodic piano lullaby, closing the album out perfectly.

In a way, Iyer’s Filter Coffee are just being themselves. The difference from their previous release is that they managed to overhaul every single department of the musical process to create what could possibly end up being one of the best independent rock releases of the year.