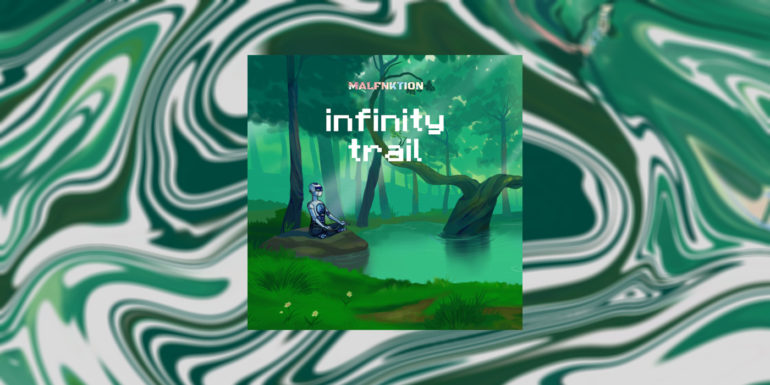 Somewhere over the course of the past seven years, Aditya Alamuru aka MALFNKTION began to develop and metamorphosise into one of the country’s most recognisable names in the sphere of electronic music. The inception of his career in Pittsburgh eventually lead to the release of two EPs in 2015 and 2016. The former titled Hindustani Rascal drew the attention of many following the scene closesly due to his knack of mixing vocal samples, nostalgic film samples and period sounds and layering them on top of glitchy electronic sounds. Through collaborations with multiple producers and artists like Shayan Roy on the hugely popular single, ‘Charlie’ a few months ago, Aditya has been able to steadily build and solidify his brand in the landscape of electronic music in India.

The process of crafting his debut full length album has been two years in the making. To find inspiration, Aditya took to traveling the country to soak in the diverse sounds that the diverse array of cultures have to offer. He calls it “Tribal Futurism”, the utopian intersection of humans and planet Earth in the distant future. The concept of the album comes from filtering sounds inspired by nature and a rustic lifestyle and filtering them through an electronic lens. This interplay of the natural and the synthetic is evident from the album art, which features an android meditating in a seemingly serene landscape. From the lush jungles of Arunachal Pradesh to the Dakinis and Tibetan stringed instruments, his debut album, Infinity Trail definitely stems from a unique point of inception.

The idea of traveling and exploration is ingrained deeply into the album, with most of the tracks named after villages and cities in north east India. The 13 tracks on the album barely cross the four minute mark. Each track features production which isn’t remotely dense or overwhelming, nor does it intend to be these things. Instead, each track features production which feels wafer thin and sparse with a lot of white spaces. There is a heavy incorporation of trap beats into the mix on every single tracks. The pummeling beats and pulsating basslines which we have heard countless times before are accompanied with an interesting palette of synths. The beats comprise 808 drum loops and even tribal drum samples. Where the album stands out is in the complete unpredictability of each track with varying synth progressions and beat switch ups.

The tracks all follow a unified template which gives the album an unprecedented homogeneity. The incorporation of natural and traditional sounds is evident right from the opener, ‘Samsara’. This is carried forth on tracks like ‘Dakini’ and ‘Shillong’ with their folk influences and Aditya’s attempt at capturing the local sounds. ‘Chopta’ with contributions from Aerate Sound, features sounds inspired by oriental and Tibetan music over a glitchy, skipping synth progression. All of the tracks on the album feature a warbling bassline and trap beats without a lot of distracting bells and whistles. However, 47 minutes filled with these repetitive ideas makes the album feel longer than it actually is. Each track features some variation of skipping keys and synth passages with enough variety to distinguish them. To the point where tracks like ‘Guwahati’ and ‘Mollynong’ feel redundant and do not validate their existence in the album at all.

‘Neuromancer’ is a relatively upbeat song with horn sections and catchy, fluidic beats and psychedelic vocal samples. The track has got a dance music feel because of contributions from producer Riatsu. The horns find a resurgence in ‘Serangga’ where they are expertly blended with some vocal samples and morsing. However, the lazy beats leave a lot to be desired in terms of an emotional experience.

Most tracks on the album have a knack of keeping listeners on their toes due to frequent beat switch ups and temperamental synth passages. This is evident in the weird and glitchy “Dentam” and the suspenseful synths of “Dirang”.  “Shillong”, with an albeit generic trap beat” features steely synth embellishments and a great beat switch up in the middle. The pulsating synths phasing in and out over the folk inspired keys are an interesting, but underdeveloped set of ideas. The album also features a couple of hip hop tracks that stick out like sore thumbs. “Bomdila” featuring MC Malicious’ debut outing features generic lyricism lacking in depth or nuance but comes with some great wordplay and rhyme schemes. “Haathi” marks MALFNKTION’s second collaboration with Shayan Roy after the single “Charlie” that dropped earlier this year. Shayan spits some aggressive bars over the somewhat generic production.

In a nutshell, the ambition and creative risks taken in the album are admirable. The tracks change direction frequently and multiple times in many tracks. However, the tracks offer little in terms of an emotional experience or a reason to resonate with the sounds. Each track comes off as a set of undercooked and underdeveloped ideas over some catchy beats that grow stale over the course of the album due to the repetition of many ideas. Infinity Trail is ambitious in scope and conception but falls short in execution. MALFNKTION is definitely to be applauded for the creative risks and the unique inspiration of the album and will definitely be an interesting figure in Indian electronic music in the years to come.