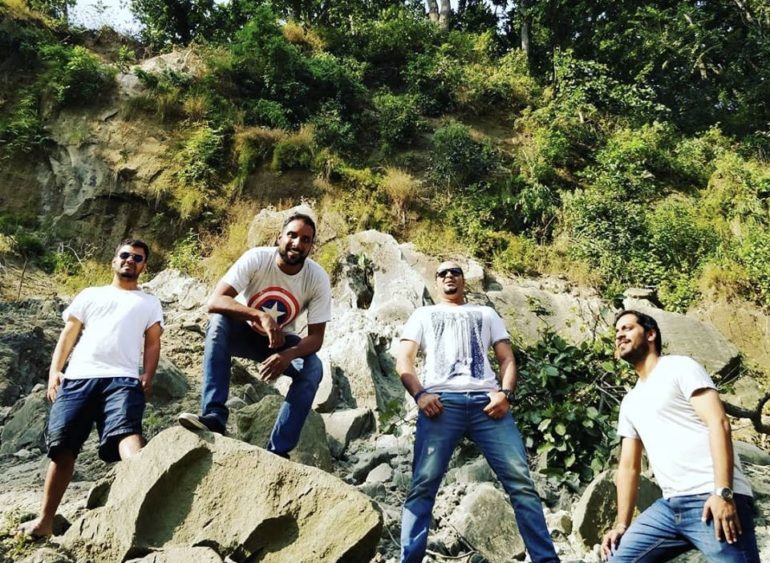 Every once in a while, we have the fortune to bear witness to a handful of creative masterpieces that would come to enchant and stupefy humanity for generations to come. These moments are marked by a degree of perfection in their various elements wherein their mere existence feels so improbable that they must have been scripted. With its exquisite blend of 80s hard rock, Carnatic and Hindi pop, Indi Graffiti’s Tumse Na Ho Payega drops more jaws than your favourite dentist.

Formed in late 2007 under a different name and hood, the four-piece began writing and composing original music blended with Hindi lyrics. The music evolved over a period and it eventually came to the shape and form it is in today. Indi Graffiti is still a four-piece collaboration but with years of composing and performing experience under its badge.

The album opens with a brief tongue in cheek piano lullaby, which quickly segues into a love letter to our favourite testosterone fuelled 80s rock bands. ‘Woh’ features hard-hitting guitar riffs and a punchy bass line, garnished with an electrifying set of vocals about heartbreak and loss. The band refuses to let the adrenaline dissipate with the follow-up, ‘Safar’. We join the protagonist as he travels across the land, looking for new stories to tell and rediscover his origins while looking for new faces and forging new bonds. The track reaches a crescendo with a trippy bassline and an uncompromising guitar solo. After just two tracks into the record, the
band’s agenda to shake up the music scene becomes apparent with its passionate lyrics and innovative instrumentation.

The album then shifts away from the hard-hitting arena rock to a more intimate sound in ‘Haeli Maeri’. The instrumentals are lush, with callbacks to the alternative and post-punk sound that dominated the charts in the early 2000s. The psychedelic guitar riffs run circles around the driving drums. The vocals resonate with raw emotion on every note as he sings about a lively and cheerful love interest. The lyrics draw interesting parallels with oceans to depict the passage of time in one’s life. The band then one-ups itself with the Carnatic influenced ‘Barsaat’. It is filled with incredibly endearing and passionate vocals that draw analogies from the transition from a storm to a rainbow to signify hope after despair. The instrumentation is minimalistic initially but quickly gives into wild and abrasive guitar solos with psychedelic synths hanging in the background.

The tone takes an abrupt shift again with the track, ‘Tum Hi Ho’. The track begins with a funky bassline which later gets accompanied with a very melodious acoustic guitar. The themes of the song include an almost maniacal obsession with a love interest and her place in the singer’s life. The track, ‘Dekh Zara’ sounds more like a campfire song with its alternative-rock/garage-rock sound. The song is upbeat and optimistic with its catchy riffs and motivational lyrics.

Things then get slower with ‘Haseen Zindagi’ which is an ode to the prettier aspects of life. The track is laced with a soothing bassline and lush synths twinkling away in the background over a very cute and melodic acoustic guitar. Towards the end of the track, we are treated to a surprising and bendy guitar solo when the track comes back for an epic encore. The funky bass and psychedelic guitars and synth make a reappearance in the track, ‘Khwaab’. The sweet vocals voice out the singer’s aspirations to be a beloved performer and his ardent desire to influence entire generations (a desire that is clearly not that far-fetched).

In the closer, ‘Jeetunga’, we return to the arena rock sound and grungy guitar licks for one last time. The track is upbeat and aims to complete its tenure on a high note. The track features severely empowering lyrical themes of succeeding against all odds and winning people’s hearts in one way or the other.

The record is peppered with themes of unrequited love, the yearning to explore and the motivation to dream and attain those aspirations. The themes are presented with profound and thought-provoking lyricism. The band conjures up instrumentation drawing inspiration from the 80s rock bands with a Hindi pop and classical Carnatic flair. These elements come together so perfectly and seamlessly that not a single note or verse seems out of place. The album features tight and meticulous production and might just be the saving grace of a stagnating music industry.