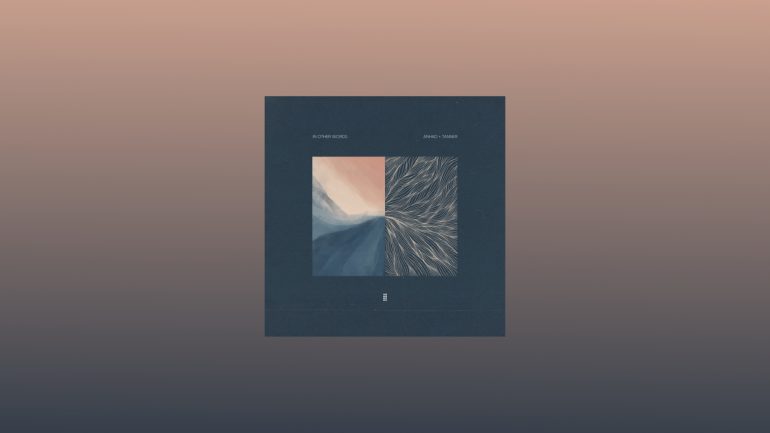 The debut effort from collaborators Anhad Khanna and Tanner Willeford spans over two years, straddles different time-zones and is another ornament in the electronic fusion mantle.

Having first met at Music Basti, a non-profit endeavour in 2016, their collaboration may have been slow to gestate: Tanner resides in Durham, North Carolina while Anhad lives in New Delhi. Further along, the duo decided to devote a certain number of months towards the project, trading ideas and sketches through the good ole online interwebz. Their standalone single ‘Jiya’, featuring Isheeta Chakrvarty got the ball rolling and spurred the pair on towards actualizing a full album.

Taking out around 3 months in 2018, Anhad + Tanner set off on writing In Other Words. Seven tracks long, and with plenty of features, the album is bluntly an electronic fusion record, with Indian Classical, World Music and cinema providing foundational support. Isheeta reprises her role on a couple of tracks here, such as opener ‘Jiya II’, the symbolic sequel to her first outing with the duo. Other vocal features on the record include familiar names like Pavithra Chari, Kamakshi Khanna and Saptak Chatterjee. Instrumental features include flautist Vibhor Mathur, tabla player Sarthak Pahwa and inputs from guitarist Aditya Balani.

‘Haari’, the next tune and first single released in favour of this album, has Pavithra’s vocalizations jousting with some frenetic percussion from Sarthak, set against ambient and occasionally glitchy production. A pleasant juxtaposition, although not something pulled out of the ether. Anhad and Tanner draw noticeably from precedents in the space like Karsh Kale, Talvin Singh and Midival Punditz. It is a winning formula after all. ‘Gum’ picks up right where ‘Haari’ leaves us. The longest track on the album offers more airy vocals courtesy Kamakshi Khanna, with an even meatier contribution from Vibhor. The flautist carries the second half of the song with soul and dollops of flash. ‘Gum’ has a lot of the same tropes of the previous song, perhaps two sides of a longer master track.

‘Coming Home’, a feature with singer Akanksha Grover, offers a slight deviation. Interesting sitar melodies are paired with interesting harmonies at the start of the song, providing welcome dissonance when coupled with the vocals. The differences also include little piano interludes along with Aditya Balani’s sparse guitar, culminating in a pleasant listen. On ‘Asheville’, the only tune without a feature, the duo throws everything but the kitchen sink in a trippy mash of synths and arps. Melodically it still retains the album’s Hindustani core and aesthetic with more sitar but is a welcome break from the vocalizing in the tracks so far. ‘Naina’ has Isheeta return to her duties in a more subdued performance, the instrumentals taking centerstage, the production providing plenty more glitch and texture. There is even a lovely little string section in the final third, till Isheeta returns to retain more foreground.

It is around this point that the record starts to weigh you down. There hasn’t been much by way of variety so far. The duo seems to have found this aforementioned formula championed by veterans like Karsh Kale and used it to death. The individual performances are still great, with both Tanner and Anhad more than proving themselves. Production and arrangement-wise, the record features plenty of moments that are worthy of aspiration, and those are soon overshadowed by saturation as the ideas are run through the mill again as each song completes its duration.

Ambient intro, instrumental passage, vocal gymnastics, more instrumental, final vocal flourish, lather, rinse, repeat. Not necessarily a stain on the duo, this might just be a by-product of the genre itself. The final song, ‘Childhood’ features Saptak Chatterjee’s vocals. As the production initially feels like your underwater, the lyrics offer familiar reminiscence of a time long passed. As far as finales go, the song is a little underwhelming. Which may have been the case with any finale, if the listener has already begun checking out during the previous tune.