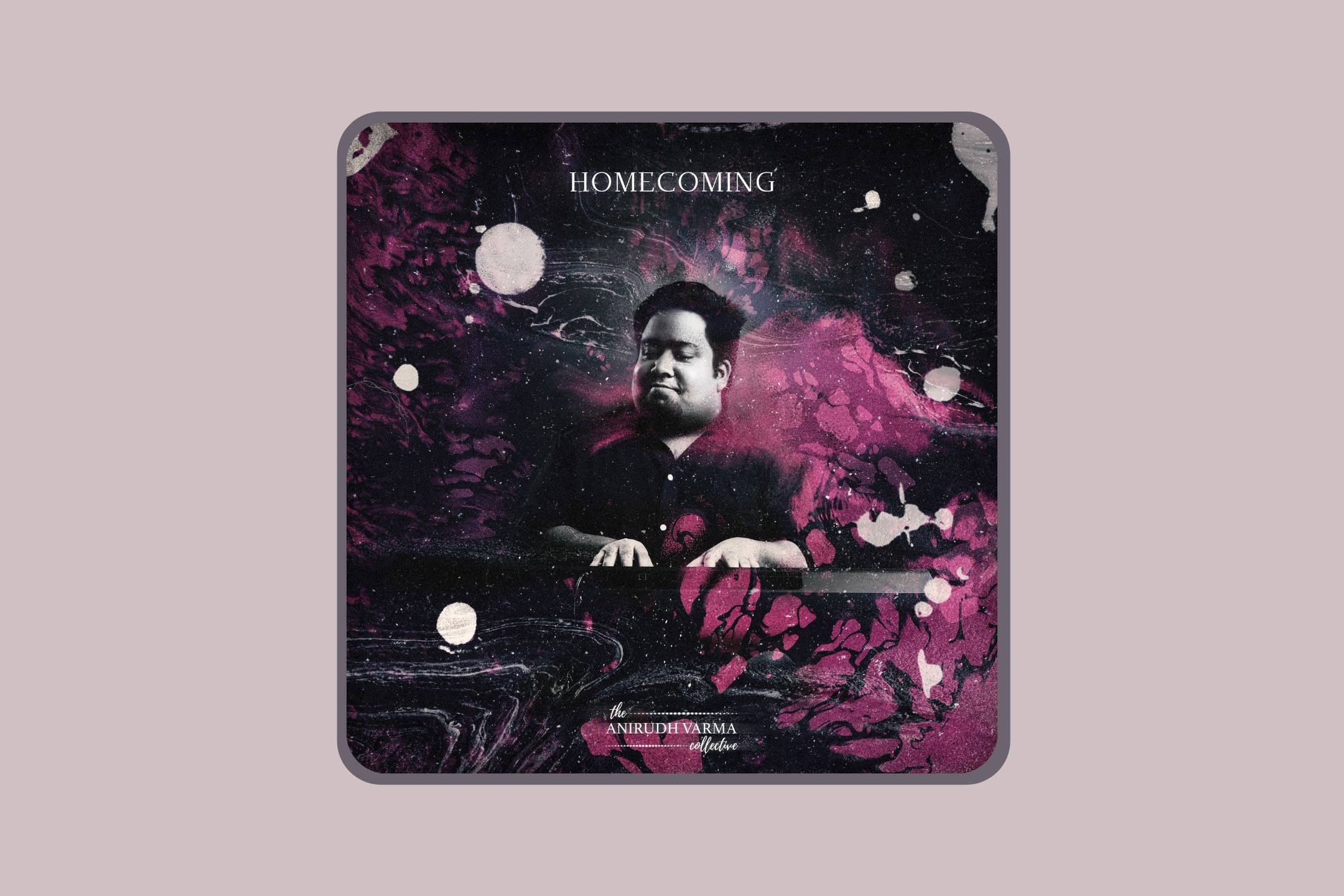 After the baroque flourish of his debut EP, The Melancholic Rhapsody, pianist, and composer Anirudh Varma immersed himself in the joyous exploration of Hindustani Classical music. His last album Perspectives dipped its toes into this tradition, but Anirudh returns with a 10 song album that soaks unhesitatingly in the endless ecstasy of Indian classical legacies.

Homecoming does feel like a return. Anirudh immerses himself into the tradition of his birthplace, and only punctuates it with Western influences. Along with some of the most highly regarded names in the contemporary Indian Classical realm, he imagines the possibilities in classical sounds that may emerge if they were heard from modern musical sensibilities.

Take ‘Megh’, a track celebrating the raaga Megh. Within six minutes, the listener witnesses the harmonic interplay of guitar and sitar. Strings from two ends of the world find and complete each other with an inevitable familiarity. Relentless and joy-drunk, the track plays like a high-octane live set, occasionally bordering on the breathless.

‘Vasanthi’ embeds the mridangam throb of Carnatic classical ragas within a minimalist soundscape that almost edges on post-rock. It quickly paces into the bewildering heights of Carnatic music, but returns to this winnowing, drifting-into-elven-woods ambient echo.

‘Stories of Kalyan’ is glorious musical mischief, a harmonic amalgam of Hindustani Classical’s raaga Yaman and Carnatic raaga Kalyani. Interspacing powerful Carnatic vocals with the twinge of a synth, and a quicksilver flute, this track sets the tone for the album—the tone being delightfully unpredictable.

The following track based on raaga Jaijaiwanti, translates Jaijaiwanti in the musical rhetoric of her Carnatic counterpart—Dwijavantii. Each verse builds to a gleeful climax, eventually surrendering to an abrupt drop.

‘Bihag’ relates a playful romance. The woman is thrilled to be reunited with her lover, but wonders how she can go to him in the dead of night, for her anklets will give away her location. It is more traditionally paced than others. There isn’t much of a surprise here, but it is rewarding to observe the rich multitudes of closer-to-book classical composition.

‘Bhimpalasi’, named after the eponymous raaga, is stormy, exploring the bliss and suffering which comes with desire. The desire to be known, loved and heard, and rejection of said desire gives birth to the widest thematic range of any song on the album. It explores a far larger musical palette, skirting and winnowing through explosive emotional colours in just less than seven minutes.

‘Baajo Re’ is the equivalent of a spring festival. Think flowers in the air, songs of praise and merrymaking, exhausting frolics through brightly flowered forests, but translated into strings, cymbals, and drums. Its vaulting crescendos are consuming, and you encounter the album’s emotional peak in this song.

Celebrating the underlying poetry in raaga Maru Bihag, ‘Naino Waaleya’ features a relatively pensive reflection on themes of inspiration, contemplation, and the self. Unchallenging vocals match clever, mischievous yet thoughtful musical patterns, swirling into a stormy, self-assured paean to old gods of music.

‘Chayanat’ has been composed and written by the venerable Pandit Kumar Gandharva. Anirudh invited his grandson, Pandit Bhuvanesh Komkali, to reimagine the composition, about a woman’s sardonic condemnation of a lover who has found desire elsewhere. But she is bereft of bitterness; she projects the wisdom of final acceptance, even though reluctant. The bandish in ‘Chayanat’ is a sonic symbol of letting your emotions consume you, before realizing that they have served their role and allowing them to release their hold on you.

‘Homecoming’ is a summary of the album. It speaks of the most human of sentiments—longing. Longing for connection, comfort, camaraderie and finally, the simple, stripped-down breath of contentment.

By blending sounds and sensibilities, The Anirudh Varma Collective reveals a gesture of larger harmony. Simply by virtue of the fact that we desire so much of the same, can we, at the level of our instincts, consider ourselves alone? Are we not united in what we desperately look for, no matter the place, soul, or circumstance?