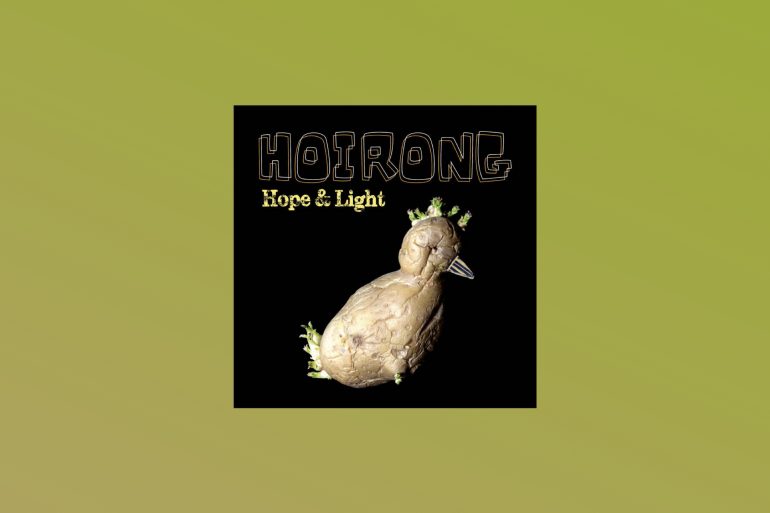 Hailing from Delhi, Hoirong deliver their sixth full-length album, Hope & Light, just two months after having recorded and released a tribute album to the late singer-songwriter Daniel Johnston. What started out as a one-man project by singer-songwriter and guitarist Kamal Singh in 2013 has evolved into a four-piece rock band with Akhil Sood on guitars, Avinash Manoli on bass and Akashat Nauriyal on drums.

On their latest project, they flit between a variety of genres, from grunge and shoegaze to electronica and metal, recalling influences as diverse as Linkin Park, Snow Patrol, Kings of Leon and System of a Down. The twelve-track album, true to its name, reveals how hope can sometimes emerge from the unlikeliest of places. Playing with shades of light and dark, Hope & Light marries crunching guitars with electronic flourishes and cleverly contrasts major and minor tonalities.

In the opening track ‘Silence’, woozy vocals and eerie guitars seamlessly transition into a rousing punk-pop chorus, while ‘Lemonade’ uses the sound of feedback to lend a sense of anarchy to the proceedings. The fog is slowly lifted on the third track, ‘Hope’, as halfway through, a soaring lead guitar pierces through the grunge texture of distorted guitars. Here, Kamal favours a more melodious singing style to that of the previous tracks as he ruminates: “The closer we get to closing the distance, the closer the truth will find its way to you.”

On ‘So Divine’, a drum and bass rhythm energetically grooves alongside electric guitars. ‘Disco Dance Party’, one of the strongest tracks on the album, weaves hope with despair as Kamal sings in a loose reggae style: “I don’t have anything to give to you”. The next track, ‘Still Life Portrait Painting’, represents a call to surrender to chaos. Here, Kamal’s vocals are surrounded by sounds of howling laughter, adding to the track’s twisted
atmosphere of a carnivalesque night club.

Throughout the album, Kamal’s vocals are ghostly and haunting, placed at a distance in the mix such that it casts a spectral presence. Rather than leading the songs, the vocals appear often unexpectedly towards the end of largely instrumental tracks. This leaves the other instruments to take centre stage. For instance, on ‘Boochie’, Akshat confidently navigates his way through a series of changing rhythms at breakneck speed, like a driver speeding his way through a smog-filled city.

The album ends on an unexpected note, with ‘Light’ favouring a much dreamier sonic texture. The frenetic rhythms of the previous tracks now seem like dust trails in the distance, as the listener is given a chance to unfurl, to bask in the stillness of the light amidst delicately plucked guitars.

There is formidable musicianship on display here. However, the unstructured nature of the songs feel confusing at times; moments include musical sections abruptly ending with new ones suddenly entering, and this leads the album’s overall vision to remain muddied. The sense of gloom looming over the tracks, too, begins to feel tired after a point. One wishes that the few moments of lightness sprinkled through the album, particularly on the two tracks the album draws its title from, appeared more often.

However, the songs are to be praised particularly for their inventive uses of traditional sounds. A tinny recording of an Indian folk song in ‘Lemonade’ gives in to ominous, busy guitars, while improvised vocal ragas dance over electric guitars in ‘Tumbleweed’ and tablas feature in ‘Disco Dance Party’. For a band keen to subvert expectations, Hope & Light does just that, managing to catch the listener off-guard and challenging anyone to dance with them in the darkness.