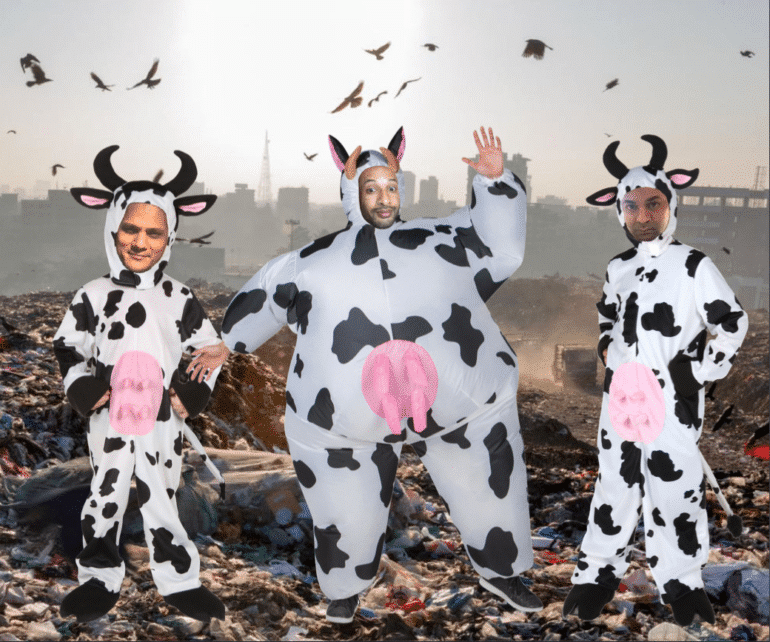 Hoirong dials back the abrasiveness on Cow Gives Milk

The Delhi noise syndicate reconvene with another 10-song romp that is both outwardly political and introspective.

Hoirong began in 2013, emerging during a sluggish period in an otherwise bountiful Delhi music scene. Frontman Kamal clearly had enough to spare following his departure/closure of Bangalore alt-folk band Lounge Piranha, and swiftly released three albums and a clutch of EPs and singles. Musically, these albums pushed back. Thick drum patterns at different frequencies, ambushed and ensconced by wave after wave of guitar; atonal textures reflecting absurd lyrics of nasty politics and the Indian experience. Not to mention the danceability found in certain moments.

On Cow Gives Milk, the band apprehensively dial back the abrasiveness, choosing a more rock-y modus operandi. The intent to reach a wider audience, perhaps. Opener ‘Bomba’ is assuring in its tempo, the Badmotorfinger guitars offering the requisite chug. Kamal Singh, true to form, wastes no time in calling out the absurd decisions of those in power. ‘Opportunity’ boasts an impressive outro, one that more than saves a slightly tiring listen.

Up next, ‘Limbo’ is a short undertaking, wading in and out of grime and gleam. The lyrics take an inward philosophical turn, where the band states that “death created time to watch what it would kill”. ‘Nagraj Will Sort It Out’ sports the line “But my intestine is a dying rotten cobra, coiled around my fear and truth”. This is indicative of Kamal’s writing, the thread extending back to his work in the late-00s.  The dissonance returns, a pleasant major-key bassline hacked to bits by a noisy two-guitar blowout.

‘CC’ is almost cruelly placed right after, a mirror-image of the previous track. The song plods along aimlessly until correcting course for a most wondrous outro brought to you by the instrumentation. Still the heavy hitter. With that stilted segue, ‘Don’t Put Nazar’ really turns up the dial, a chugging down tuned guitar line sandwiching a tongue-in-cheek defeatist lament about “nothing we need” being “the best we have”. Along with the imagined barbarism of vodka and soda.

An interlude at best, ‘Shark! Shark!’ is an eerie couple of minutes, where dogs bark over a set of sombre chords jostling for space with a fuzzed out guitar solo. These lo-fi moments are few and far between, the band seemingly opting for beefier production value. Thankfully the hooks do remain.

‘Vastu Shastra’ has the band at their most fun, not giving “a fuck about anything or anyone”. ‘Designed for Failure’ has few promising moments and is a little anaemic save for a redeeming outro, the instrumentation once again doing the heavy lifting. A commentary on identity while side-eyeing post-modernism, ‘Turmeric Latte’ is replete with self-appointed titles like “gutter brain hypocrite” and “liberation junkie”. It is Hoirong at its densest, and a great closer to an unquestionably Hoirong album.

With qualms limited to the clunky pacing and occasional stylistic snafu, Cow Gives Milk is a consistent release from an important act that should be heard. If anything, it is a good introduction to the band.