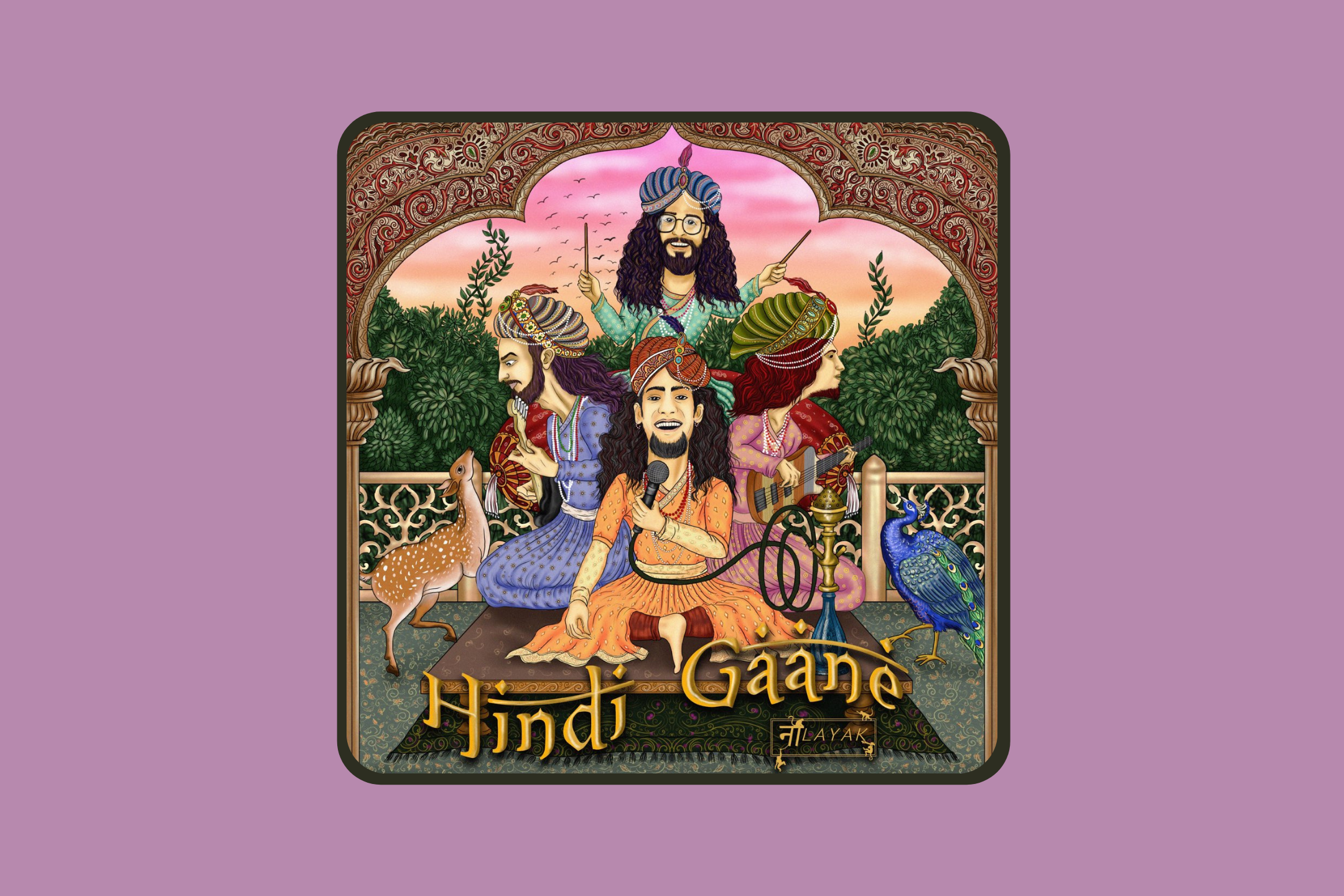 Hindi Gaane features the previously released singles, ‘Mustafa,’ ‘Nasamajh,’ ‘Befikre’ and ‘Dil-Ae-Raza’ and new tracks ‘Zakir,’ ‘Jazba,’ ‘Sahil,’ and ‘Maa’. The quartet chose to exclusively release the former on the digital music platform, OK Listen, back in 2020 as a way of creating a sustainable flow of income, something many independent musicians faced the lack of in the midst of the global coronavirus pandemic.

On October 29, 2021 Naalayak released the album across all streaming sites, optimising their reach to fans and listeners across the country.

Hindi Gaane kicks off with the saturated tones of the introductory track ‘Zakir’. Making for a great entry to this album, it is a mellow but evocative arrangement that gives listeners the perfect taste of what lies ahead, without giving away too much. Spoiler alert, Hindi Gaane is a collection of pleasant and unpredictable surprises that will leave your feet tapping, your body swaying and your heart full of joy.

The second track, ‘Mustafa’, offers up that unpredictability with slick ease. Starting off with an enjoyable acoustic riff that supports the first verse, the chorus soon bellows into full blown rock riffs backed by a fast-paced rhythmic section, accompanied by powerful and rich vocals.

‘Jazba’, the third track on the album, presents itself similarly to ‘Mustafa’, but takes its time. Nearly six minutes long, this one incorporates both mellow and powerful moments—a push and pull that cements itself as a signature on this album.

‘Befikre’, arguably the most intriguing track on Hindi Gaane, provides a much-needed refresher on the album, breaking away from the mood of its predecessors. Featuring a heavy and gritty rock vocal arrangement and a groovy bass hook, this one encapsulates the band’s vision of “creating their own sound” superbly, and also makes for the perfect segue onto the next track, ‘Nasamajh’.

Unabashed and uninhibited, ‘Nasamajh’ is a quintessential, bratty rock track that will have you head banging and singing along instantly, thanks to its energetic guitar riffs and an electrifying solo that leads to an expansive delivery of vocals. This track, in some ways, also presents as the lyrical peak on the album, giving listeners an inside look into their unique, mischievous and naalayak approach to storytelling.

‘Sahil’, brings the energy down a notch. Acoustic in its entirety, this one is a tune of melancholia, nostalgia and longing—a surprising facet from this group of rockers. ‘Sahil’ is accompanied by its sonic sibling, the penultimate ‘Dil-Ae-Raza’, a folksy, acoustic tune that parallels much of the music in the indie-acoustic genre that surround us.

‘Maa’, the closing track on Hindi Gaane, registers as an underwhelming departure from the primary sound of the rest of this album. Speaking of the strength and selflessness that defines many mother-child relationships, this track is the most overtly sentimental track in the collection.

Sonically, Hindi Gaane by Naalayak is likely to be a roaring success in the Indian independent music scene, bound to connect with many. The composition is bright and energetic, impossible to resist and the vocals are captivating. With this album, like all their previous projects, it’s clear to see that Naalayak is giving all they have to creating a sound of their own – one that brings “Desi-ness” to the global stage. While their music many not step too far out of the comfort zone, it certainly lends itself to welcoming anyone willing.